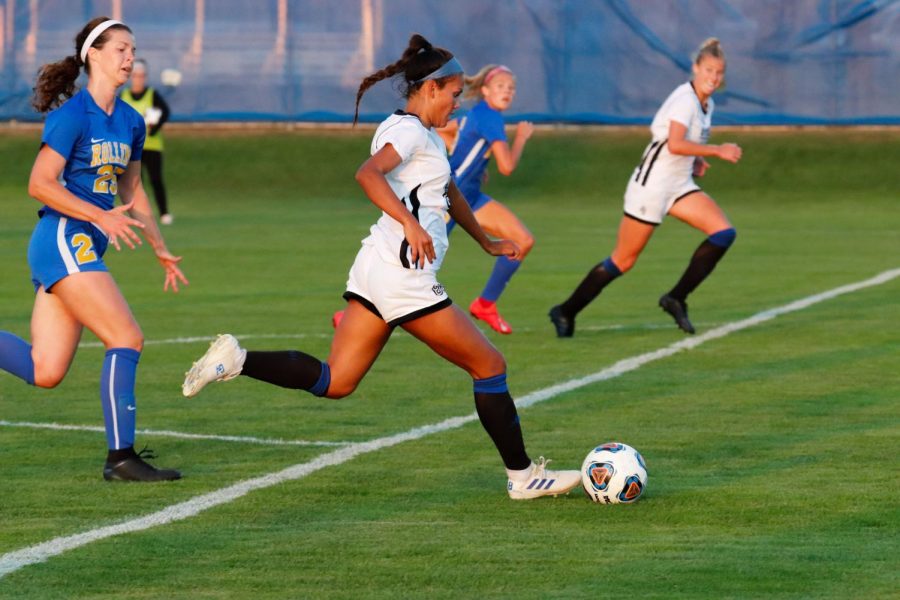 So far, so good for the Grand Valley State University Women’s Soccer Team.

“I’m really proud of the result,” said GVSU Head Coach Jeff Hosler after playing Rollins. “Winning season openers are tough and they’re exciting when they’re at home, but they add some additional pressure on the side, and I think our girls handled it really well.”

GVSU opened up their home opener against Rollins by rattling off four unanswered goals before Rollins put the ball past GVSU goalkeeper Jessica Radice in the 60th minute.

Redshirt freshman forward Chantel Carranza thumped home the Laker’s first goal of the season in the 16th minute with senior midfielder Riko Sagara and junior forward Caitie Baron teaming up for the assist.

The goal was also the first of Carranza’s career after she sat out the entirety of last season with a medical redshirt.

“It was incredible just putting on the jersey for the first time,” Carranza said. “After sitting out last year, it was an unreal feeling to be able to go on the field and not be on the bench and put something on the board for my team.”

Junior forward Ava Cook took over from there. Cook put her prolific goal scoring ability on display by beating three Rollins defenders up the left side and scoring an unassisted goal from the far post in the 31st minute, raising the score to 2-0.

Cook followed that up with another goal shortly after halftime in the 46th minute, where Sagara displayed her touch and vision as a passer by placing a through ball behind the middle of Rollins defense to gain Cook the opportunity to score.

Noteworthy too, Cook took an elbow to the jaw then was shoulder checked by her defender who seemed to have been frustrated with Cook’s physical style of play. Cook responded with said goal after receiving the pass from Sagara not 20 seconds later.

“Unfortunately, that isn’t as obscure as it seems for me, it’s something I’m used to, to be honest,” Cook said. “I mean if they’re going to do that it’s something that just ramps me up even more and it just gave me extra motivation to go at them fresh out of the locker room in the second half.”

Nine minutes after her assist to Cook, Sagara took matters into her own hands as she put a rocket through the upper right-hand corner of the net from the middle of the field 30 yards out, putting GVSU up 4-0.

Perhaps having felt too comfortable with their lead, GVSU appeared to let off the gas for a short stretch, as Rollins notched two quick goals in the 60th and 61st minute to draw the score to 4-2 with under 30 minutes to play.

“I think we switched off for a little bit when we went up four-nil,” Hosler said. “I don’t think we maintained our focus in those moments. We had some careless turnovers and we didn’t take care of the ball.”

GVSU came back to life to shut down Rollins for the rest of the game and added a fifth goal in the 84th minute, by way of freshman forward Kennedy Bearden scoring her first career goal as well on an assist from junior defenseman Cecilia Steinwascher.

“I’m super proud of everyone, obviously no one wants to concede two goals, but it was kind of a hill we had to overcome, and I think we did that,” Cook said. “Scoring the fifth goal was something fantastic that we needed to do, and we were able to do that.”

GVSU followed up their performance against Rollins with a game against Lee that featured a tightly contested ball game early on where GVSU was able to take more control as time went on.

Redshirt sophomore midfielder Gianna Parlove put the Lakers up 1-0 in the 18th minute when Carranza lofted a pass to the right wing to Caitie Baron who crossed the ball back in front of the net for Parlove to tip it in.

The Lakers added their second goal at the feet of Cook in the 49th minute after she took a centering pass from Baron and blasted the ball through the net.

Sixteen minutes later, Bearden added her second goal as a Laker in as many games after she sent a rebound home off a shot from fellow freshman Brooke Russell, which closed out the scoring for the Lakers at 3-0.

GVSU faces high expectations once again this year as the Lakers were voted the preseason No. 1 team in the country by United Soccer Coaches and the D2CCA. The ranking comes on the heels of finishing last season 25-1-1 and losing in the national championship game to Bridgeport University 1-0.

GVSU looks to continue their winning ways in Mankato, Minnesota on September 13th and 15th against No. 18 Bemidji State and No. 25 Minnesota State – Mankato.