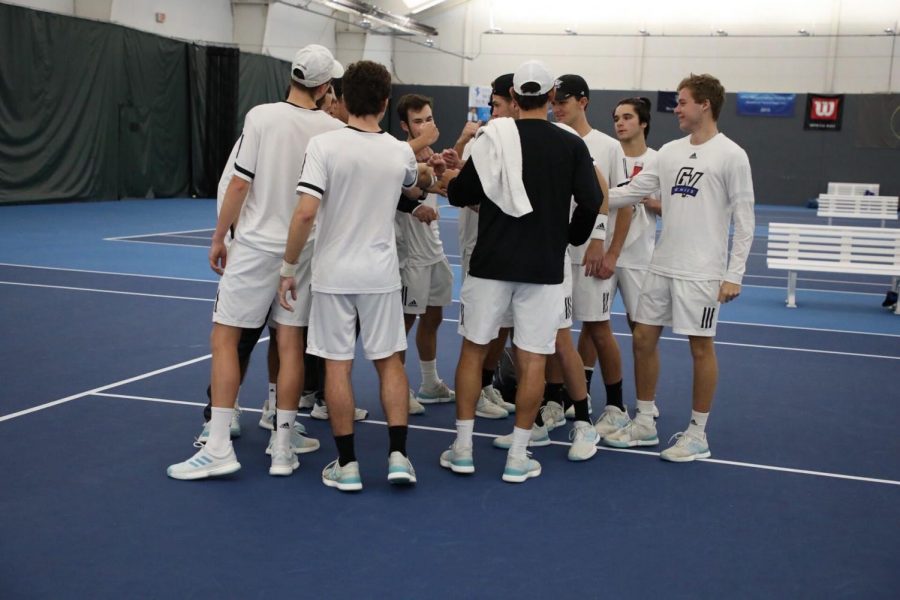 “Jack Dausman and Martin Matov did well in doubles and they ended up winning the tournament. They started out the tournament well, they had three rounds of doubles the first day and won all three matches, which ended up winning them the draw. They both also did well in singles,” Coach Schall said. “They both went 2-1 so they both had a loss but they were close, tough matches. Each of them had a good win on Saturday in their last match coming through winning in a tiebreak. It was good to see them fight through and win a close match at the end.”

With this being her first tournament that she has coached at GVSU, Schall said it was good to get out there with her players and get to know them better as well as get some good experience.

“It’s been good to be here for a few weeks and kind of get to know them as players and as people. We ended up taking all 12 guys to this tournament, so it was just nice to come together and spend a lot of time together as a team,” Schall said. “The expectations are really high, down the road we have set some aggressive goals as a team but it’s a process so really just getting them to believe in what it’s going to take, the hard work and the mental training that it’s going to take to cover that ground.”

Being that this was her first match as the head coach for GVSU, she was a diligent learner and put a lot of strategies in the back of her head for future matches.

“I have a lot of thoughts after watching them compete for the first time this weekend and I took a lot of notes while they were playing and I talked to the team for quite a while after the tournament wrapped up about what we need to do next and where we need to get to,” Schall said. “A few things came to light that we can work on and it’s just continuing to build the strength to compete well and the mental strength that it takes to compete so I think it’s going to be a good week of training after seeing them play for the first time.”

The GVSU Men’s Tennis team will play in one more tournament next weekend at the Hope Invitational in Holland, Michigan as they prepare for the ITA Regional Championships at the end of September. Schall said she liked what she saw over the weekend and hopes to use it to improve and grow as a team moving forward.

“We saw a lot and feel like there’s still a lot to work on and build on, but we had a couple of good results. We had a doubles team that won their tournament on the first day which was good,” Schall said. “The rest of the way for singles we had some third set tiebreaks which was a good experience for us. I would say a majority of our matches went to a third set so we had some good results and we lost those tiebreaks but as we get ready for the ITA (Regional Championships) in a few weeks, that was definitely good practice.”

The Fall season is a unique time for college teams, as even though most of the tournaments are individual, Schall is hoping to build team chemistry moving forward.

“In the fall it’s all individual tournaments so they’ll have the opportunity for some individual success but as a team, I think it’s just kind of getting on the same page with our team culture, with our vision and the way we want to do things,” Schall said. “If we can figure that out and come together then I think we’re going to have some good results in the spring.”