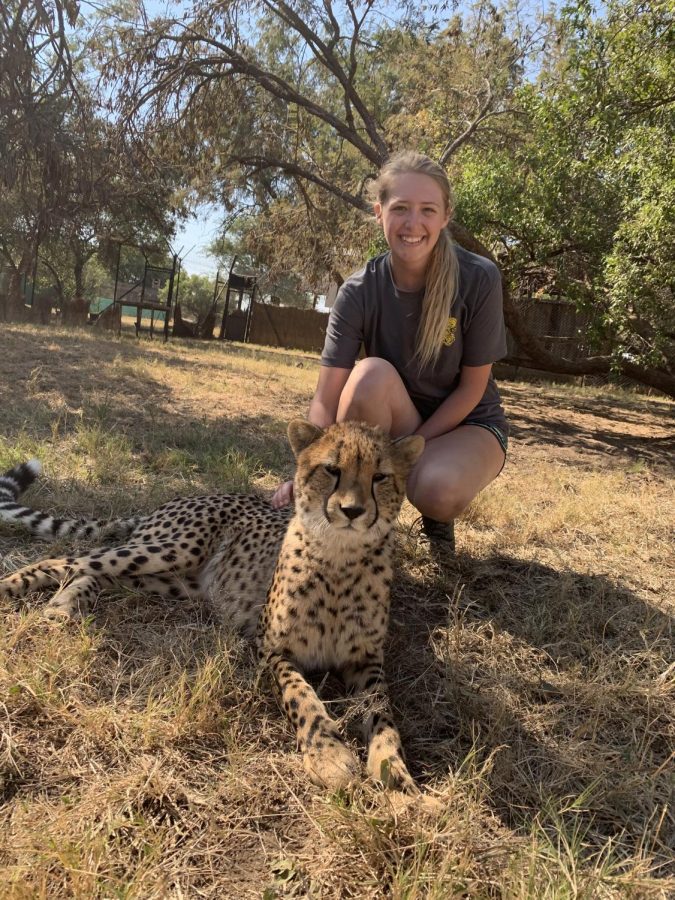 For any future veterinarian, taking care of cheetahs and other animals native to South Africa at a wildlife conservation center is a phenomenal way to learn the tricks of the trade. But for Grand Valley State University student Sam Super, it was a childhood dream.

“Cheetahs have been my favorite animal since I was five,” said Super. “So this was a dream come true for me. My major is biology with an emphasis in veterinary medicine — I’d like to work with small animals and a mix of exotics. I work in a clinic at home where I do all the receptionist work, so I hear about the vet side of things but don’t get to work with it a lot myself. So this was an incredible hands-on experience for me.”

Super and the rest of her Loop Abroad student group spent two weeks at the Feracare Wildlife Centre in Bela-Bela last June learning about animal anatomy, behavior and conservation.

“We learned general veterinary things, like how to suture and how to give injections, but also valuable skills about conservation,” Super said. “Cheetahs are really endangered — there’s only about 7,000 of them left in the wild. The facility I was at is a captive breeding site to help grow the population. We did health care and general maintenance, feeding rounds, cleared brush around the enclosure in case of wildfires, thatched the fence lines… there’s a lot that goes into it. We also got to perform a necropsy — autopsy is humans, necropsy is animals — on this weird antelope type thing. There were so many weird antelope type things.”

The group also got to visit the nearby village to eat dinner with locals and watch traditional dances, as well as spend a weekend at the Kruger National Park. But for Super, the most memorable moment of the trip was experiencing that infamous cheetah speed and agility first hand.

“Some of the cheetahs at the site are hand raised, which means they’re bowl-fed by the conservations,” Super said. “We got to bowl-feed them ourselves, and one time as I was doing that, one jumped at me from behind. It was just excited, but it was my first day, so it was pretty intense. The younger ones — about one to two years old — are playful like that, but the ones who aren’t hand raised are still very wild and very aggressive.”

The fright seems to have worn off for Super, who’s already itching to go back.

“I want to go back to South Africa — I’m hoping I’ll get another chance when I move on to med school,” Super said. “If you’re a veterinary student and you’re thinking of taking the trip, go for it. It’s going to be one of the best experiences of your life.”