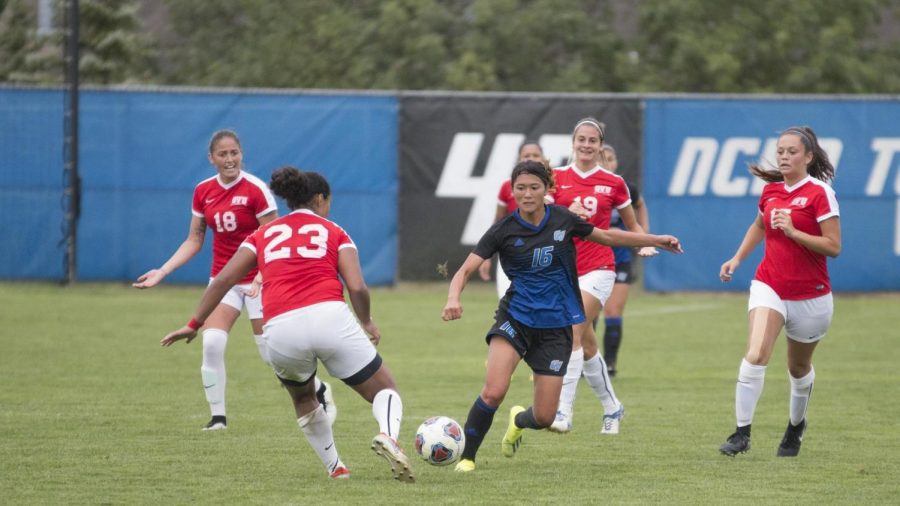 “Complacency is the enemy of progress,” once said Hollywood movie producer and writer Dave Stutman.

After defeating two NCAA tournament qualifiers a year ago, including a nationally-ranked top 10 team in Lee University, complacency can be a problem for a team that experiences early success. Going into their game on Friday, Sept. 13, the Grand Valley State University Women’s Soccer Team would have none of that.

The GVSU Lakers used an early offensive explosion to gain a lead they would never relinquish and overmatched a seasoned Bemidji State squad that was coming off of a one loss season of their own.

“We did a much better job setting our tempo per possession, which lead to us getting a couple of really good combination goals early on,” said head coach Jeff Hosler.

GVSU scored their first goal of the match in the 13th minute, via a tag-team assist from midfielders Riko Sagara and Darline Radamaker. Sagara placed a centering ball to Radamaker just beyond the penalty arc, who then gathered and dished the ball through to redshirt freshman forward Chantel Carranza, who splashed the ball into the back of the net for her second goal of the season.

Just over a minute later, GVSU would go on to add their second and final goal of the match, once again thanks to the fancy footwork and vision of Sagara.

The senior midfielder thumped a soft line drive diagonally over the heads of the Bemidji State defense to find junior forward Caitie Baron on the right side of the penalty box, who gathered with her right foot, shifted direction and sent home a left-footed laser to score her first goal of the season.

“Whenever I get the ball, I am always looking toward the other side of the field,” Sagara said. “That’s kind of my thing and I was able to find Caitie to score.”

Sagara’s assist to Baron marked her second multi-assist game of the season in just three contests.

“Riko has really special vision and her knowledge of where players should be is exceptional,” Hosler said. “The only thing now is for her to continue to learn the tendencies of her teammates; how they like to score, get into space or link up back to goal and she can only get stronger as a player going forward.”

Sagara also thought that her team did a good job of maintaining possession and making accurate passes all night against the Beavers.

“We were expecting them to press the ball a lot more than they did,” Sagara said. “We did a good job of collecting the ball and moving the ball side to side so that we could score goals from the combination.”

The Lakers held the Beavers to only one shot on the entire night, a shot on goal in the 50th minute that was stopped by goalkeeper Jessica Radice to preserve the shutout.

Through three games, Sagara has tallied one goal, four assists and four shots on goal as she has helped orchestrate a dominant GVSU attack.

“For all the experience we return, we are still a pretty young team on paper,” Hosler said. “To go on the road and deal with travel all day yesterday out to Minnesota and play a really quality team that only lost one game last year and dominate the way that we did is a great start.”

Up next, the Lakers travel to face No. 2 Columbus State in a battle of the top two teams in the country Saturday, Sept. 21st. That game is set to kick off at 1 p.m.