The Allendale Community comes together for the Fall Festival 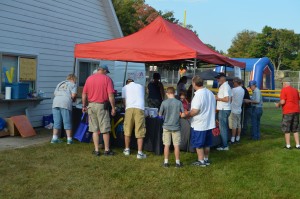 On Sept. 21, the Allendale community will be joining together to celebrate the fall season at the fourth annual Allendale Fall Festival. The festival is free to the public and will host a variety of events, including a car show, craft show, softball tournament, beer tent and petting zoo.

The event is being coordinated by Kimberly Blum and Elizabeth Burgess, who are both active in the Allendale community. Blum is the Executive Director for the Engine House No. 5 Foundation, a firefighting museum, and Burgess is the marketing coordinator for Autoparts Xperts, an auto parts shop — both of which are located in Allendale.

“The Allendale Fall Festival is about community getting out and having a great time,” Blum said. “We will have a craft show with over 100 booths, huge car show, petting zoo, softball tournament, free flu shot clinic, sponsor booths with giveaways, a bean bag tournament, firefighter relay, race car display from HecTec motorsports, the Allendale Fire Dept open house and a beer tent with euchre from 2 to 5 p.m. and live music from 6 to 9 p.m.”

The Allendale Fall Festival has been an annual event in the community since 2016, and started as a small craft show at Engine House No. 5. “The following year we reached out to Autobody Xperts to add a car show and quickly outgrew our space so we moved to the township park next door,” Blum said.

According to the event’s website, they are now supported by several local businesses and have various nonprofit clubs participating. “We wanted to add more to the festival and so the idea came to ask local nonprofit clubs to participate with their members and skills to bring more fun to the overall event,” Blum said.

In response to being asked if community was an important aspect of the Fall Festival, Blum replied with, “Absolutely.” She then went on to further explain the roles of the nonprofit groups participating with the festival this year.

Other nonprofit groups participating include The Allendale Lions Club, Engine House No.5 Foundation, Knights of Columbus, The Mitten Mafia, The Allendale Fire Department and The American Legion Post 401.

Blum encourages GVSU students to attend the event. “Come visit your own backyard and experience your community of Allendale. We have something for everyone and most things are free,” Blum said.

Blum has been organizing the events since the start, and has only positive things to say about the experience.“It has been  incredible to see how the event has grown. I am so proud of the positive reputation and excitement that builds around this event,” she said.