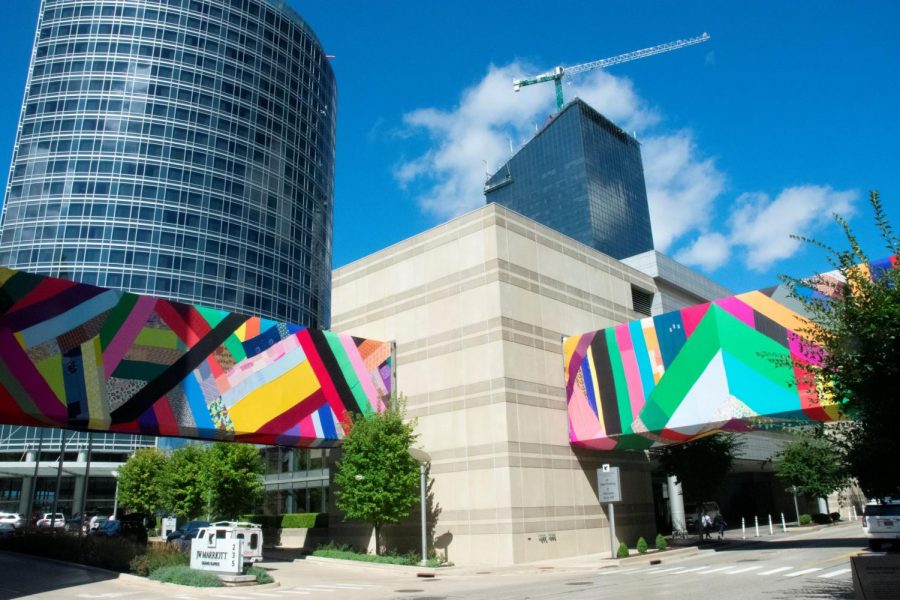 As the annual ArtPrize event shifts from an annual to a bi-annual celebration, the ArtPrize group has put together Project 1, a new public art series, to take its place during gap years.

Grand Rapids has to wait another year until ArtPrize 11 comes around, so the city has to adjust not only to a new event in its place, but the temporary absence of one of its largest artistic and cultural attractions, how is the city reacting?

Most obviously, Project 1 has provided Grand Rapids with the work of just five different artists, spreading public displays throughout the city and hosting a range of events to support it. ArtPrize senior communications manager Jaenell Woods said the ArtPrize and Project series will have obvious differences, but the bi-annual shift in the popular event will allow for more creativity in how to showcase public art.

“ArtPrize has always been an evolving experiment, reacting to and challenging the community,” Woods said. “We laid the groundwork over the last 10 years, and this next chapter will generate new ways for us all to be inspired and challenged, to come together as a community. Project 1 is an opportunity to change the way we work with artists.”

Woods said the goal with Project 1 is to create an experience different from ArtPrize, especially keeping the community in mind. For example, hundreds of local volunteers participated in Amanda Browder’s piece “Kaleidoscope.” Because of this new focus on community-driven art, Woods said that the energy seen so far has been inspiring.

While many expect ArtPrize’s year off to result in a dip in tourism, Experience Grand Rapids Public Relations Manager Stephanie Bradley said that the city has been holding its own. It’s still too early to have a definitive answer, but the absence of ArtPrize has been supported by growth within the city that bolsters tourism year-round.

“ArtPrize is definitely a key event in Grand Rapids and that hasn’t changed, however Grand Rapids is a ‘cool’ city with a lot going on,” Bradley said. “Tourism is driven by many factors. Grand Rapids has become recognized as having a great food scene, impressive offering of craft breweries, an abundance of underrated outdoor recreation and more. So, even with a transformed ArtPrize, Grand Rapids will continue to attract visitors.”

Some of the replacement events most obviously include Project 1, but also feature Fall in the City, which promotes activities from mountain biking to seeing plays.

Despite being in the ArtPrize gap year, the City of Grand Rapids hasn’t changed its approach to handling the seasonal influx of tourists. Special events manager Evette Pittman said that planning for all large-scale events like Project 1 and ArtPrize involve conversations a year in advance.

“We bring in all of the city departments that may or may not be impacted that event, so we bring in engineering when we’re working with Project 1 or ArtPrize because of the scale of the art,” Pittman said. “We also work with refuse and recycling, which is our public services department because when you have an influx of a lot of people coming into an area, people generate trash and hopefully recycling. We work with our traffic and safety department because we know there’s a lot of traffic coming in… All of our departments really get involved.”

The difference between ArtPrize and Project 1 includes both spread and duration, as ArtPrize had a smaller scope in ways, Pittman said. To prepare for the unknown facets of a new public event, Pittman said the city anticipated high levels of turnout and made sure resources were distributed all around the city.

“(Project 1) presented a bigger question for us because the thing about ArtPrize is that it’s all contained downtown within a 3-mile square radius…. (Project 1) is all throughout the city of Grand Rapids, so it wasn’t just a conversation of traveling downtown or containing refuse and recycling downtown, or making sure resources and serves downtown were available, we not have to look at the entire city… And like anything new, you don’t know what to expect.”

While the reaction to the new public art is still unfolding, Woods said she can be sure of one thing: when ArtPrize returns for its 11th iteration, fans will value it just a little more.

“My personal thought is that ArtPrize will become more precious, and both artists and venues will have more time and resources to devote to their participation in a biennial event,” Woods said. “Project 1 is also encouraging visitors to dive deeper into the concepts and ideas behind fewer works of art, which will hopefully translate over into their future ArtPrize experiences as well.”