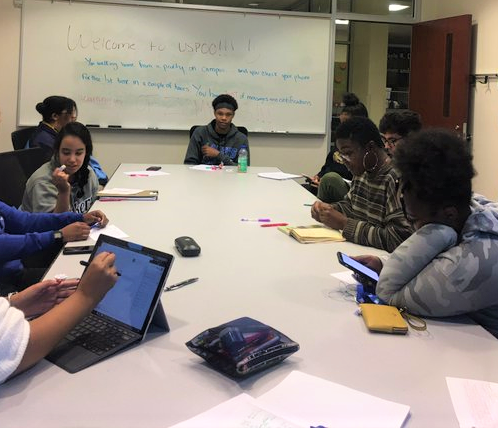 Every Monday at 7 p.m., Untold Stories for People of Color (USPOC) gathers in 1247 Kirkhof. After settling in while listening to music and chatting about their days, the club gets to work on their first writing prompt of the night.

“We usually come up with them on the spot,” said Breann Barge, USPOC president and founder. “Last Monday, our first prompt was to write a description of an object up close, and we were looking around for something interesting so I just pulled out my pink umbrella. Later, the group came up with ‘write about a time you fumbled the bag,’ because earlier someone was talking about their bad luck with dates. One of my favorites that a member came up with was, ‘You’re coming from a party where you haven’t been checking your phone, but when you leave, you see all your notifications and realize the zombie apocalypse happened while you were out.’”

The prompt filling and brainstorming process is very casual, and though members are encouraged to share writing done outside the club if they’d like, it’s by no means required. The club’s main purpose is to practice writing in a community with other people of color, and the informal and friendly atmosphere means conversations often run over their 8:30 p.m. end time.

“We have lots of writing clubs at Grand Valley and they’re all very great, but many are white spaces,” Barge said. “There’s nothing wrong with that — it’s just who goes to them — but you often feel uncomfortable because you can’t always relate to what the group is writing. I’ve noticed that even in fiction, the content tends to be quite different than when I’m with other people of color. You have this sense that you’re invisible, and that makes you reluctant to share because you feel like a very small voice in a sea of many. That’s why I created the club: to amplify those small voices so that we can feel heard.”

Though Barge has worked hard to promote the club since she founded it during the winter semester of last year — even earning a nomination at the Office of Multicultural Affairs “Black Girls Rock” event for her efforts — she likes to take a step back during the meetings themselves.

“I’m a real behind-the-scenes person,” Barge said. “Our vice-president, Waverly Eubank, is the one who keeps us on track and provides the energy. As president there’s a lot that you have to do footwork wise, because you’re the face of the club so you’re in charge of outreach. There’s a lot of work to do to get our name out there, but of course you’re going to do it. But just being in the club has helped me to always be in a creative mindset — being in school, there’s so much other work I’m doing, but with the prompts I can keep it fresh so I’m not beating a dead horse too much. I’m continuing to reflect on my writing and practicing the craft.”

Those interested in USPOC’s missions of bridging communities and nurturing the creativity of minorities on campus are always gladly received at their Monday meetings.

“We are always welcoming with music, laughter and creativity,” Barge said. “And sometimes, candy.”