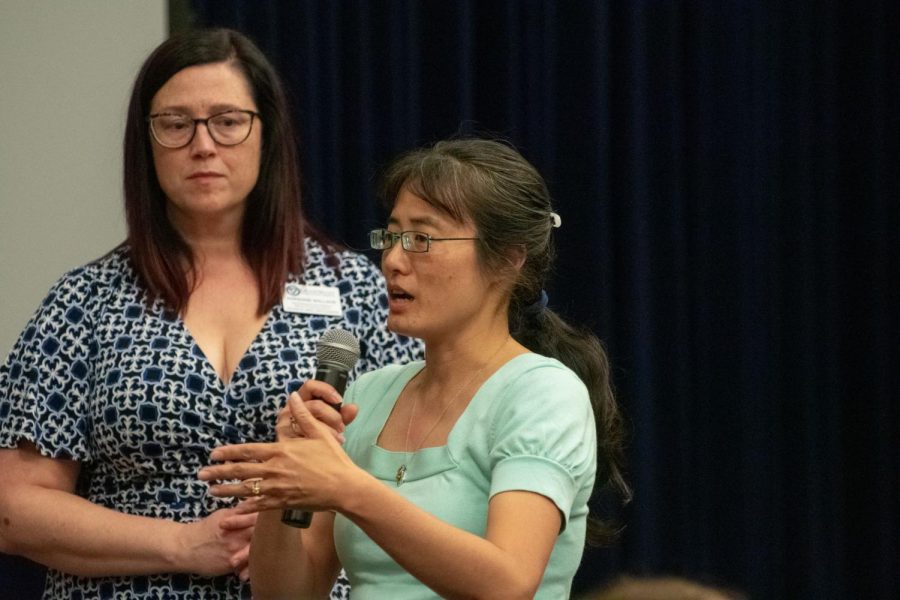 “Issues surrounding water have been at the forefront of the cultural zeitgeist,” said Community Engagement Associate of the Community Service Learning Center Jane Johnston. “When you think of Standing Rock, Flint and Rockford, there are places right in our backyard where people don’t have access to clean water.”

PFAS consists of around 4,700 toxic chemicals. These chemicals do not break down and can lead to adverse health effects, including infertility, hormone disruption and cancer.

“We live in a special place on the globe, surrounded by 20 percent of the world’s freshwater supply,” Hood said. “Groundwater supply is critically important, and the Great Lakes support our top industries, agriculture and tourism. Our competitiveness into the 21st century is dependent on water.”

Rediske studied water issues at GVSU’s Annis Water Resources Institute for years before investigating PFAS contamination in 2012. He joined Concerned Citizens for Responsible Remediation (CCRR), a citizen group that discovered elevated levels of PFAS in fish near the Wolverine Worldwide tannery in Rockford.

When Rediske analyzed the materials that CCRR members produced, he concluded that the group had found pollution connected to the tannery. Since then, over 1,000 residential wells in Kent County have tested positive for PFAS contamination.

“Get to know people exposed to these chemicals,” Rediske said. “When you start associating real people with contamination, it’s altogether different.”

Following the discovery of pollution in Rockford, journalists such as MLive’s Garret Ellison started covering PFAS cases around Michigan in 2017. As more stories about PFAS came out, citizens began pushing their legislators to tackle the problem.

After receiving countless calls about PFAS, Brinks made addressing PFAS one of her top legislative priorities. Brinks’ most recent bill would set a limit of five parts per trillion for two common PFAS chemicals in drinking water, a stricter maximum contaminant level (MCL) than the federal health advisory level.

Brinks said that citizens should voice their concerns not only to legislators, but to businesses and government agencies. She pointed to a well-attended town hall about the Wolverine Worldwide groundwater pollution hosted by the Michigan Department of Environmental Quality in March 2019.

“We must hold polluters accountable for the damage that’s been done,” Brinks said. “It’s not enough to fix the problem by itself.”

“If you have an issue that you’re passionate about, start researching it,” Johnston said. “Who’s it affecting? What can I do about it? It’s not about solving the issue on your own; that’s never going to happen. It’s about finding ways to make an impact where you are.”

The next Democracy 101 lecture entitled “Media Literacy and You” will take place Wednesday, Oct. 2. For more information, visit the Democracy 101 website.