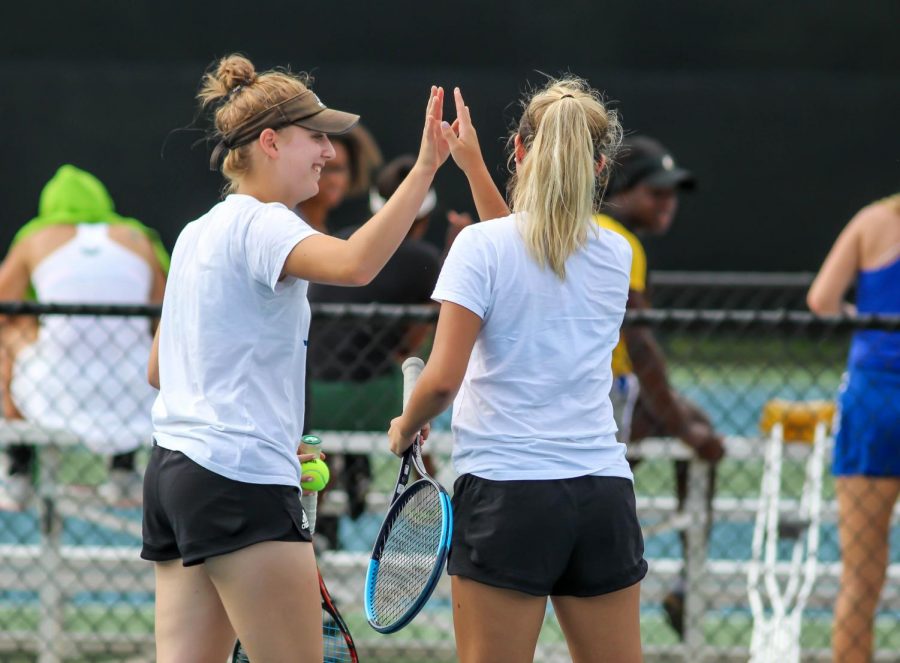 Head Coach of the Grand Valley State Women’s Tennis team Samantha Schall finished coaching her first ITA Regional tournament at her new school. The tournament was held in Caledonia, Mich., and had some mixed results.

“There were positives but at the same time it was a tough tournament for us. It’s a high level (tournament) with all of the region coming together and competing for the tournament individually,” Schall said. “There were some good results, like Liv Hanover made it to the quarterfinals of the B-draw which was nice and our doubles team of Marily (Canellopoulos) and Vera (Griva) made it to the quarterfinals before losing. There were definitely some tough results this weekend and there is a lot for us to build on.”

Compared to other tournaments or invitationals, Schall says the ITA Regional Tournament is a little bit different and a good checkpoint for the team’s progress.

“The ITA Regionals are a different atmosphere for sure. To be honest, it is a big tournament for all of the players in the fall and it’s important for them to do well,” Schall said. “Everyone wants to come out and do well at this tournament and this tournament is the highlight of the work that you did on your own in the summer or what you’ve done so far in the fall. People want to do well and there is definitely a high level of play for this early in the season.”

The ITA’s take place after just two weeks of conference play, which Schall says is helpful for the team. The women’s team had success early in the season and were looking forward to showcasing their skills in the tournament.

“The ITA’s are interesting timing-wise but I think it can be good and really beneficial for us. We had two conference matches for the women before this tournament and we won them both which is great,” Schall said. “We take a week to do this tournament and then next weekend we have off because the men play in this tournament, so we have a week and a half off now before our next match where we can really work on the things that we need to after this tournament and get our mind back on the team side of the season.”

All in all, Schall said that the women had more success in doubles action over the weekend and was pleased that her team was listening to what she has been preaching in practice.

“We had a couple of tough draws for singles. The other team in the A-draw was Marija (Leko) and Taylor (Barrett) and they had a really tough first round,” Schall said. “They played a seeded team and lost but they were trying to do the things that we were working on in practice and make some changes to their game which was good to see. It was a good result for Marily (Canellopoulos) and Vera (Griva) to get through a few rounds. Our B-doubles team won their first round but lost their second round so I think doubles was a bit better for us this weekend.”

With some struggles this weekend, Schall wants to work on improving the small, fundamental details of her players’ games going forward.

“The tennis this weekend was pretty good but we’re going to start working more on our focus, our in-between points, our body language, positivity and things that can help us succeed even more than just what we’re doing in-between the points,” Schall said.

After a long difficult tournament this weekend, Schall wants to focus on work and recovery. The ITA’s can be taxing on the players and she’s looking forward to using this tournament as a building block to the team’s growth.

“I think the girls have done a good job the last couple of matches just getting themselves ready so just getting healthy because this was a tough tournament and they have three or four matches in one day for the last two days so just recovering and regrouping to work on some of the things that we talk about,” Schall said. “We’ve been talking about having good practices leading into the matches so that we’re really confident when we step out onto the court to compete. I’m looking forward to going back to work with the team on Monday to work on focusing more on our goals as a team moving forward.”

The GVSU Women’ Tennis team will look to improve upon this outing when they take on rival Ferris State on October 2.