Where the Heart Is: Students carve unique paths to make GV their home 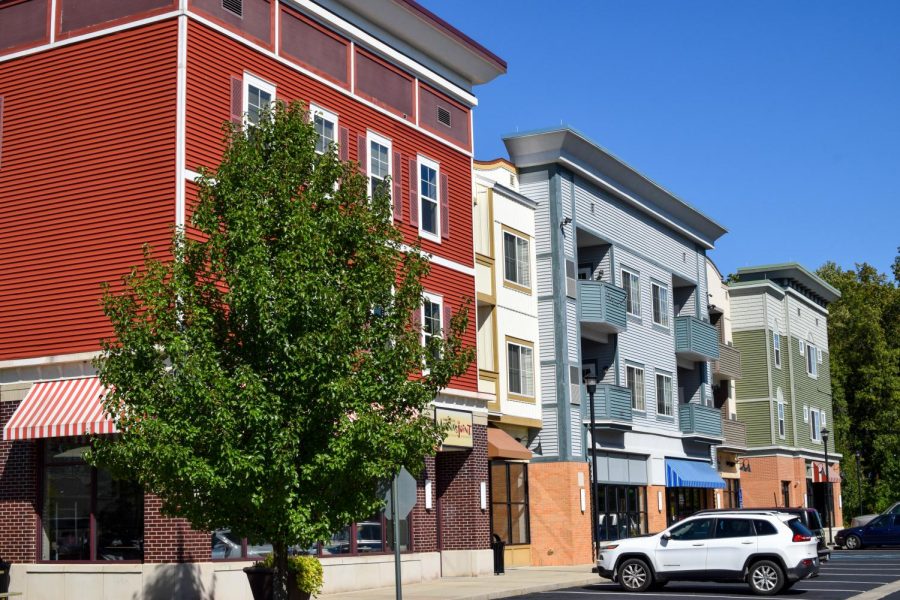 As students transition from summer into a season full of assignments, football games and extracurriculars, many also transition from living with their families to life on their own in Allendale.

With that brings a whole series of responsibilities: how to adjust to a new space, how to manage your own time or how to sign a lease on your own.

The Lanthorn spoke with three students who have each carved their own journey through independence, homesickness and embedding themselves in a new community. Throughout their unique experiences, they have all found themselves at the same destination: calling Grand Valley State University their home.

AJ Natzic sits at his desk in his bedroom, his gaming computer below him and his headset on. He’s lived at his current apartment at 48 West for two years, and went in blind with his roommate.

He says the process of moving away from home was easy for him, and he quickly accepted that he was going to be on his own from then on. Now, he shares his two-bedroom apartment with his roommate and his dog, Hawkeye.

“This place feels like a second home.” Natzic said.

The place he said that he feels most at home in his apartment is at his desk, in his bedroom. The sunlight fills the room around him as he spends time concentrating on homework or gaming with friends.

He has made his place feel more like home with the help of his girlfriend, who painted several pictures for him that now hang on the walls of his bedroom and living room. They showcase a Seattle skyline at sunset — a city he would love to live in one day — and a GVSU insignia made with thread and nails.

Home for Natzic is comfortable, he said. It’s a place where he feels independent.

Sally Hoerr stands standing next to her collection of memorabilia from her home in Vermont. Since moving to her current apartment in Campus View, this is the first time she has been able to show off her possessions.

Hoerr spent her high school years at a boarding school, and having lived on her own for so long made the move to GVSU feel like it wasn’t as much of a tough transition as it can be for other students.

During her time living at GVSU, Hoerr has learned the importance of having a space of her own, where she can come home and be in a place she feels safe and stress free.

“I need a space to come back to, where I can relax and be my own person,” Hoerr said.

She chose to live by herself after a few bad roommate experiences, and says it was the best decision for her. Now, she only shares the space with her cat, Shenanigans. Hoerr noted that while the typical college experience encourages students to have a roommate, she said that it isn’t the best fit for everyone.

Hoerr emphasized the freedom she feels now, and how she’s been able to make her space feel more like home, which is something she hasn’t been able to do in the past. This includes a collage of inspirational quotes and a shelf to showcase cherished items from home.

“I have a shelf full of all my stuff from home because I finally have a place where I can put all of that now since it’s my space,” Hoerr said.

Since moving into a one-person apartment at GVSU, Hoerr stresses the importance of being able to feel comfortable in a living situation, she said

“You need to feel comfortable in your home,” Hoerr said. “Wherever that is, even if it’s just for four years, if you can’t get away from your stress it’s never going to leave.”

Home for Hoerr is liberating, she said. It’s a place where she can embrace being herself.

Sydney Washington stands next to her decorated wall in her dorm room, where she lives with a swath of other residents.

Washington is in her second year of being a resident assistant (RA), and says that her positive relationship with her freshman year RA inspired her to become one herself.

“I really like the community aspect of it,” Washington said. “It’s a great way to meet faculty, staff and other people on campus.”

Washington said that RAs play a big role in freshman development and the transition when students first move onto campus. All of the RA’s on campus are trained in dealing with homesickness, and Washington said that they focus on how each student is different and needs a different level of help with adjusting.

As for herself, Washington grew up on campus because her parents worked and studied at GVSU, so she said she never had a problem with it feeling like home.

When talking about her own space at GVSU, she says that decorating the walls and building a community with other residents through being an RA has helped make her feel at home.

“Basically everything in my room is some type of motivation or has sentimental value,” Washington said. “When I’m in here and I don’t have to be doing anything, I can just look at the walls and think of the memories they bring up.”

Looking around her room, Washington decorates with posters of things she enjoys or people she admires. Above a table, a wooden spork and customized anchor remind her of the support that makes her love living on campus.

“Last year, the theme for our RA training was cooking up community, so at the end of it, we all got little momentos. It’s the same for the anchor — the director made us all anchors for our staff last year so I wanted that to be my centerpiece.”

Beside them are two blue and white GVSU pom-poms, which Washington dates back to her very first football game when she was a child growing up on campus.

Home for Washington is all-encompassing. It’s not only a place where she can be inspired, but a campus-wide community.