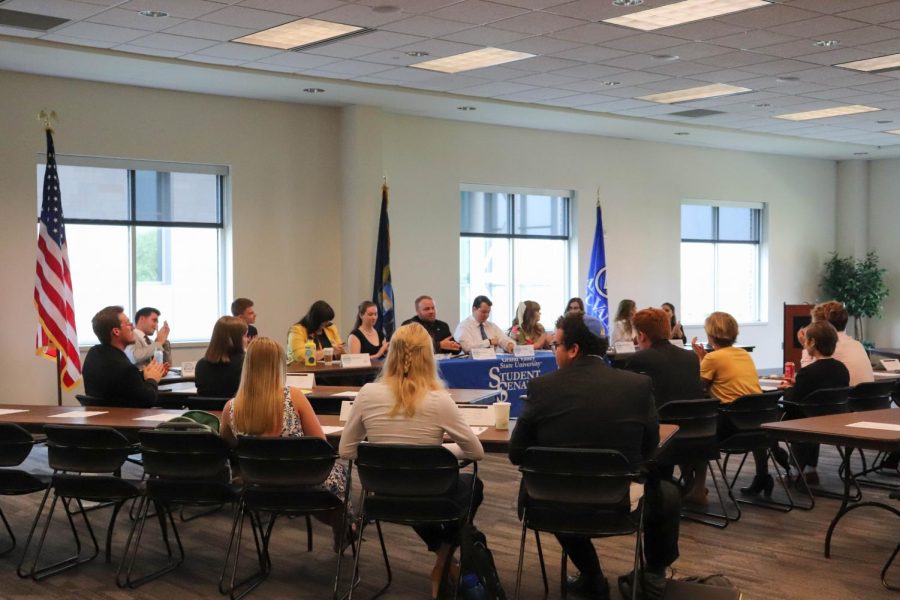 Dowker, who is in her second year on Student Senate, highlighted her dedication to harboring and maintaining relationships within the body during her speech. She ran on platforms of inclusion and representation, seeing the role as one that supports cabinet’s vice presidents and is a paragon of representation among both the senate and the student body.

“To be executive vice president is to be passionate and willing to work,” Dowker said during her opening speech. “We’re not here to further our agendas, but to advocate for all 25,000 students who aren’t in this room.”

After a quiet call for new nominations, both candidates were given five minutes to share opening remarks. Dowker noted her history of advocacy, especially her work at the tail end of last year in helping to pass a resolution on university non-discriminatory regulations with President Eric-John Sczcpaniak and former vice president Rachel Ibarra. Sanchez-Castillo voiced his persistence and desire to have a strong Student Senate body amid a wave of new members.

Both nominees were each allowed to field five questions from the body, which was extended to an additional five toward the end of discussion. Questions included what their goals were for the position, how they built relationships within the body and how they would handle internal conflict.

As both nominees exited the room, the rest of the body discussed their upcoming decisions. The majority of senators who spoke out put their support behind Dowker, which ended up foreshadowing her victory.

“I knew that Kelly was meant to be on Student Senate, and eventually in a leadership position, from the moment I interviewed her,” Ibarra’s statement read. “She is meant to be a leader in this body.”

Dowker’s appointment once again fills Student Senate’s cabinet as it looks toward the rest of the academic year.