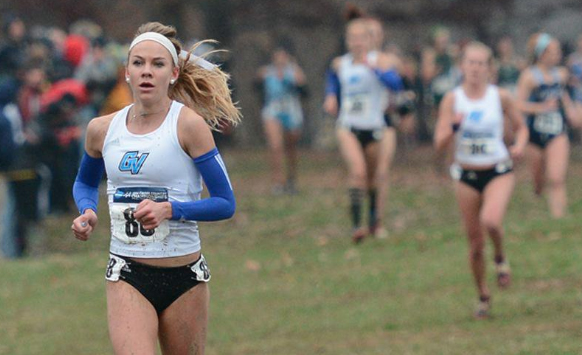 This Saturday, the GVSU Men’s and Women’s cross country teams took on some of their top competitors at Ohio State. Both teams ran a great race despite the challenging circumstances, leaving the race with a second place overall for the Men’s 8k and fifth place for the Women’s 6k.

“I think it was overall a pretty good day for the team as a whole,” Ludge said. “It was a really good opportunity to be out there with D1 schools and compete against competition that we don’t get to see always.”

The race was a good gauge on where the runners are so far in the season and where they fall short up against some of the bigger schools. The underclassmen showed promising results this weekend as well with a few running together and improving from their scores earlier in the season.

“We had a really strong group taking steps forward,” Ludge said. “Hanna Groeber finished right behind me and she’s really strong, and then our third and fourth Maddie Goes and Jessica Gockley worked together and they had a great race. A few of our underclassmen have made really good steps.”

The senior said after talking to a couple of the underclassmen, they all felt really good about their results, and Ludge thinks they are improving nicely for a great season ahead.

Coach Jerry Baltes offered some insight to both races as well.

“On the men’s side, we didn’t get out real well — we were in the back for the first half of the race and had a lot of ground to make up throughout,” Baltes said. “We had some positive things, but certainly need to improve on getting out in the race and establishing a better position over the first third of the race.”

And on the women’s side, Baltes said, “It was a super good field. Those four teams that beat us are all top 30 teams in D1, so we were up against a super stud field. They did a good job of competing and not backing down.”

Both Chada and Lude planned out their race very well before hand and maintained a good placement throughout the race. They kept up their speed and finished in the top ten.

Looking into the next few weeks, the team will be skipping out on the Oct. 4 meet in Lansing, and running on Oct. 11 in Muskegon for the Jayhawk Invitational. The race will be filled with D2 schools, so their goal is to win, Ludge said. Their competition won’t be as fierce, so it should be a good representation of their improvements thus far.