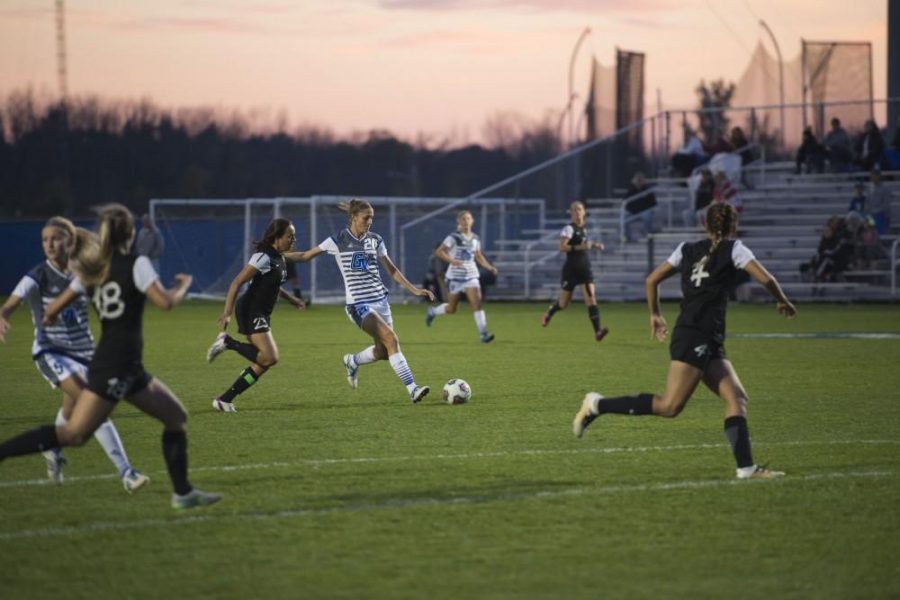 The No. 4 Grand Valley State University Lakers beat the University of Illinois-Springfield Prairie Stars, 6-0, on Tuesday, Sept. 24 for their fifth win of the year and their second win in a row.

GVSU dominated from the get-go, outshooting UIS by a 32-3 margin and placing 11 corners to the Prairie Star’s one.

“It was good to see the ball go into the back of the net pretty often,” said GVSU coach Jeff Hosler. “We were pretty sharp in our first few opportunities on goal and that allowed us to open it up and get the 6-0 win.”

GVSU used a big night from junior forward Ava Cook and got out of the gates early. The Lakers scored their first goal in the seventh minute, courtesy of a tip in from Cook after a combination of sophomore midfielder Gianna Parlove and freshman forward Kennedy Bearden saw a slotted ball find Cook in front of the net to put them up 1-0.

In the 36th minute, Chantel Carranza sent the ball into the back of the net after she  received a through-ball from senior midfielder Riko Sagara to double the advantage for the Lakers in the first half.

Coming out of halftime with a 2-0 lead, Cook hit another gear, as she scored GVSU’s next three goals in the span of nine minutes.

GVSU’s third goal and Cook’s second came off an assist from Parlove once more. Parlove set-up Cook near post in the 47th minute, who then rattled the ball home after bouncing the ball off of the cross bar.

GVSU’s fourth goal came off of a well placed corner kick in the 50th minute from junior defender Makenna Schoolman that, once again, found Cook in front of the net, who headed it home for her third goal of the night.

“When Ava approaches matches with the mindset to takeover, she has the ability to do so,” Hosler said. “I think she really approached the second half that way, especially with how she came up with 3 goals in the span of 9 to 10 minutes.”

Cook’s fourth goal that pushed the GVSU lead to 5-0 came courtesy of a great aerial cross from Cece Steinwascher in the 54th minute. Cook collected the pass from Steinwascher and blasted the ball home.

Junior midfielder Lauren Ross added GVSU’s sixth goal in the 78th minute after a shot from Sagara sang off the crossbar and found Ross in front of the net for the second chance finish into the back of the net.

Cook had 4 goals on the night, which was a career high and doubled her goal total on the season from 4 to 8. When asked about what allowed her to come out and have such a dominant performance, she cited the momentum the team had coming off of a big game.

Cook also gave praise to Parlove for her performance against UIS, who had two assists on the day and helped set up numerous attacking opportunities for the GVSU front line.

“Gi-Gi is probably one of the shiftiest players in the midfielder across the country,” Cook said. “Teams have a really hard time trying to stop her because of how shifty and smart she is playmaking for us.”

15 minutes into their Friday, Sept. 27, game against rival Saginaw Valley State University, the match was postponed to a later date due to multiple lightning strikes in the area.

When the game was called, the score was 0-0 and featured play as sloppy as the weather from the Lakers who did not match SVSU’s intensity but came out of the game unscathed.

“We didn’t match their level of energy and it showed,” Hosler said. “But that’s what shows up in game preparation, we definitely didn’t prepare as hard or as well as they did and they definitely outplayed us for the 15-ish minutes we were out there.”

GVSU Soccer will have a week to re-cooperate before having a home match-up with the Davenport Panthers. That game on Sunday, Oct. 6, will kick off at 1 p.m.