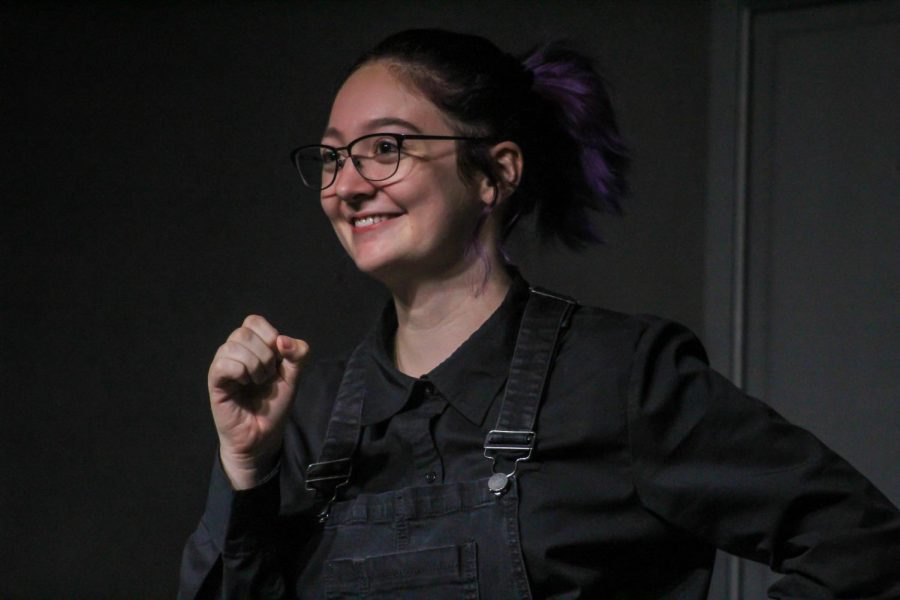 The two teams gathered along with the comedy-loving crowd at The Comedy Project in Grand Rapids at 8 p.m. each night of the tournament to share in performing, snacks and on-the-spot smiles.

The tournament took place in the form of two different rounds. Both evenings, the teams alternated performances, gaining points each time they took to the stage.

In the preliminary round of the tournament on Oct. 3, the teams brought their best acts of short form improv to the table for the portion called the “Short Form Showdown.” There were a number of games for the teams to participate in, and they were scored based on how well they did in the games as well as how many votes they received from the audience following their performance.

The Comedy Project theater manager and producer Eirann Betka-Pope said she loved the first round for the sole reason of how much fun the teams seemed to have with each other.

“(My favorite part was) hearing the teams laugh together while warming up backstage (and) hearing all the things they have in common, especially their love for improv,” Betka-Pope said.

“Day one was fantastic and we left leading the event by 30 points,” Gbur said. “It was the most successful competition we have participated in.”

The following week, teams advanced to the next round with their existing points to build on their current scores.

On Oct. 10, the semi-final and final rounds of the tournament consisted of the two teams performing sets of long form improv, drawing out as many laughs as possible in the “Long Form Lineup.” Each team received ten minutes to enact their best long form improv based around three challenge cards that they had to draw before beginning their act.

The night is concluded with a “Laugh Off” round where the teams stood in a circle and attempted to make each other smile or giggle. Those that fell to the comedic mastery had to step out of the ring, and the last member of either team left standing gained the most points.

Following this, judges scored the teams based on three different categories, each worth 20 points: the quality of improv, the use of challenge cards and the audience approval based on cheers.

Although they battled to the comedic end, Subject To Change fell to Calvin Improv 618-370.

The tournament did not finish without a reward, and the winning team received much more than a shiny, gold trophy. Calvin Improv was given a headlining show at The Comedy Project and will receive 40 percent of ticket sales for that night.

However, due to the effort and energy Subject To Change performed with, they are still being given the opportunity to perform at The Comedy Project for the public.

This tournament was the first of its kind, as The Comedy Project is a newly developed business. However, Betka-Pope does not want this event to stop anytime soon. She hopes to make it an annual, widespread competition with more college teams involved in the coming years.

“[The goal of the tournament] is to showcase our local college talent and add a little friendly competition between schools,” Betka-Pope said. “So often, collegiate theater groups are overshadowed by sports teams, and we wanted to draw attention to the talent in each team.”

The students that participated valued the experience highly. Gbur said that it’s not about what they receive, more so the experience that the team gained and connections that they made.

“We got to forge a great connection with Calvin Improv and learned a few new games to perform at our on-campus shows,” Gbur said. “The more performances we do, the better the team gets.”

Subject To Change vice president Leah Erben said she thoroughly enjoyed the ability to meet the people of Grand Rapids that share her passion, as well as work so hard with her team.

“It was a great opportunity for us to meet Grand Rapids comedy people and expand our performance horizons,” Erben said. “The more we perform as a team, the better we get. We learned more about performing in comedy clubs, and we really had to support each other and be adaptable.”

The Comedy Project offered much more than a tournament, but a welcoming, enjoyable atmosphere for the members of Subject To Change to do what they love.