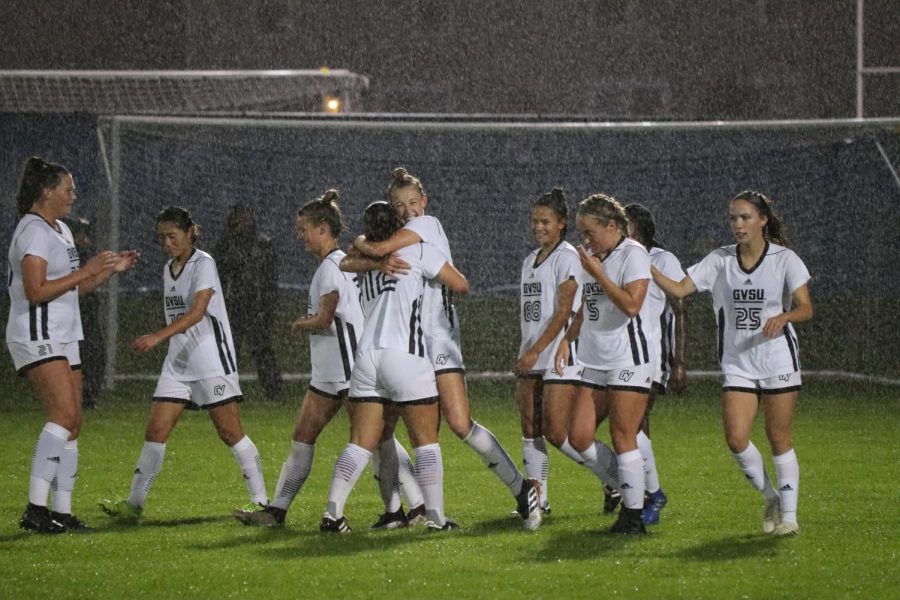 Eli Ong, Staff Reporter
Temperatures sank into the low 40s, winds had gusts up to 25 mph, and the rain came in sideways. GVSU soccer still walked away with an easy win.

“It was a sloppy day, rained all day so field conditions weren’t great but I think our kids did a great job of moving the ball well and generating chances,” said Grand Valley State University coach Jeff Hosler after the game. “To score 4 goals and come away with a clean sheet…I think we played very well defensively too.”

Despite the poor weather conditions, the Lakers romped their way to a 4-0 victory, in which they overmatched a young Wisconsin-Parkside team, limiting them to 1 shot on the entire game while taking 33 of their own, 16 of which were on goal. GVSU also maintained a solid possession rate of 65 percent.

After completing the win, the Lakers improved to 8-1 overall on the season and 1-0 in conference play, while Parkside dropped to 5-6 overall and 0-3 in the conference.

Junior forward Ava Cook continued to pace the GLIAC in goals scored, adding her 12th and 13th of the season against Parkside. It was Cook’s fifth consecutive match with a goal scored.

Junior defenseman Sydney O’Donnell scored the decisive goal in the 10th minute, her first of the season, while junior forward Caitie Baron also added a goal of her own and assisted on two more.

Baron sprinted down the right wing and rolled a centering ball towards the back post for O’Donnell in the 10th minute, who redirected into her far side-netting to beat the keeper and give the Lakers the lead.

Just three minutes later, another centering ball from Baron found Cook, who sent a rocket in to double the advantage. In the 16th minute, Cook would strike again, taking a through ball from junior defenseman Cecilia Steinwascher, side-stepping the keeper and lacing the ball into a vacant net that gave GVSU a 3-0 lead at halftime.

Going into the second half, the Lakers again came out firing, consistently peppering shots toward the Parkside goal, but couldn’t break through until the 88th minute, when Chelsea Graves found Baron on a diagonal run and set her up for the late dagger, which moved the score to 4-0. It was Baron’s second goal of the season.

“Caitie (Baron) is one of our shiftiest, silkiest players when it comes to attacking the net and getting opportunities for our other players,” Hosler said. “Her ability to beat defenders and create for others is another reason why we can be so dangerous on the offensive end.”

Hosler was also quick to give credit to the Rangers for scrapping it out on defense and not making it easy on the Lakers to score in the second half.

“I give Parkside a lot of credit, they fought the entire match,” Hosler said. “In the second half they did a lot to limit our dangerous scoring chances. We really had to work for it and we didn’t find that many options compared to how many scoring opportunities we had.”

Rangers freshman goalkeeper Izzy Guyer played a big role in holding the Lakers to only 4 goals in the match. Guyer played exceptionally well, making 12 saves on the day.

In the end, Hosler said that the Lakers focus on maintaining possession and making safe, smart decisions on the attack is what enabled them to be so successful.

“Ball control from the wing was a big deal for us today,” Hosler said. “When our center backs and wings work good in combination with each other, we are going to find a lot of good opportunities to score like we did tonight.”

The Lakers are back in action Sunday, Oct. 13 when they host the Purdue Northwest Pride for Senior Day at 1 PM and the again the following Friday, Oct. 18 at the Northern Michigan Wildcats.