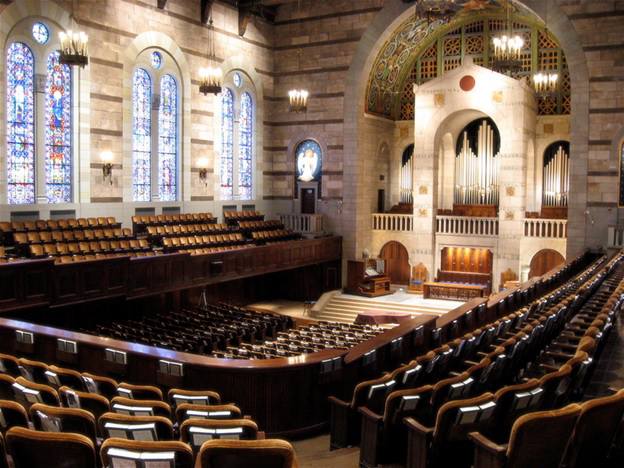 What do Malcolm X, Winston Churchill and Amelia Earhart have in common? They all were speakers at Fountain Street Church.

Known for its rich history, liberal theology and social programs, Fountain Street Church celebrates its 150th anniversary this year. The church is known for hosting lectures, concerts and workshops. In commemoration of its storied past, the church recently threw a street party, hosted an organ recital and even released a limited run of “Fountain Streeter” beer in collaboration with Brewery Vivant.

“Looking back on 150 years of religious history, we’re at a real turning point,” said Rev. Chris Roe, Minister of Spiritual Life & Learning. “There could be something totally beyond our imagination that’s next. It’s time to jump ahead and ask, ‘Who isn’t being met, and how can we meet them where they are?'”

With its convenient downtown location and 1,600 seat sanctuary, the church gained popularity as a public meeting space for famous luminaries visiting from across the country. Women’s rights activist Susan B. Anthony hosted one of her women’s suffrage convention meetings in the sanctuary and called for the women’s right to vote from the pulpit. Former First Lady Eleanor Roosevelt once invited Fountain Street’s youth group to visit her home in New York and meet foreign dignitaries at the United Nations. Even legendary guitarist Alice Cooper stopped by the church after a rock show after hearing rumors about an after-party.

To this day, the church serves as a popular venue for events such as ArtPrize, Laugh Fest and the Grand Rapids Feminist Film Festival.

Fountain Street Church maintains a reputation for being a liberal church in a conservative religious community. The church is non-denominational and invites congregants from all faith backgrounds.

Every Sunday, the church hosts a chapel service featuring upbeat music in an intimate space and a more traditional worship service in the sanctuary.

“If you were to mute (the service) as if you were watching it on YouTube, it would look like any other church service,” said Virginia Anzengruber, Content & Communications Manager. “If you were to unmute it, you would realize it’s a little bit different.”

Roe believes that churches should rethink their programming to adjust to changing times. He is currently planning a trip to Washington, D.C., where students will learn about advocacy.

“The funny thing is, you have this false sense when you work (at Fountain Street) that you’re so woke; the kids will challenge that so fast,” Roe said. “Too many service projects result in people saying ‘the white kids saved the day! We painted the walls for these poor people!’ That’s not what we’re about.”

Roe leads the Fountain Off Fountain discussion series and Screen Club, which is a “book club with popular television shows” at Wealthy Street Theater. These programs take place offsite as part of an expanding understanding of the church.

“There’s always going to be a space at church where people can go to contemplate deeper meaning,” Roe said. “But learning and community happens everywhere, not just church pews.”

As Fountain Street Church remembers its past, it also looks forward to a future without its senior minister, Rev. Dr. W. Frederick Wooden, who will retire in April 2020. A search committee hopes to hire a new senior minister by next fall.