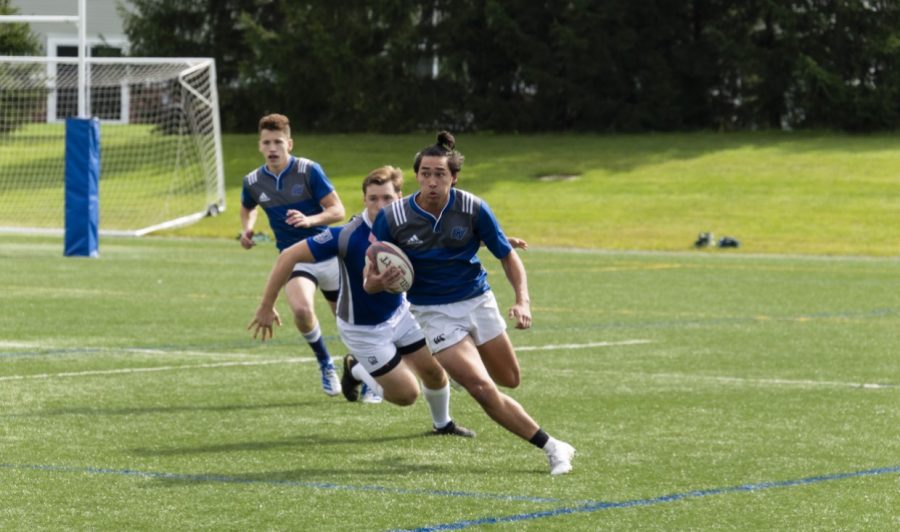 The Grand Valley State men’s club rugby team improved their record to 5-0 on the season after a 65-19 throttling of Saginaw Valley State Saturday, Oct. 19.

The must-win game was tied at 19 at halftime and GVSU Rugby head coach John Mullett said the adjustments the team made at halftime were the difference in the game.

“I gave some instructions to a couple of players because they were getting away from what they do well, and I think that made a difference in the end,” Mullett said.

Of the few adjustments Mullet made at halftime, the biggest one was with team captain Cam McGloughlin.

“He had been playing in a way that was a little bit too much finesse-driven, and we told him to go back to being a north-and-south runner and once he did that he scored three tries in the second half,” Mullett said. “Once he got back into his game, the other team (SVSU) didn’t have an answer.”

Austin Cochrane was another key to the adjustments for GVSU in the second half.

“He played rover today, a position that our team invented for a guy that’s very fast,” Mullett said. “He was anywhere he wanted to be on the field if he thought he saw space and that kept the other team on their heels because he was creative running the ball.”

Although there were some up-and-down performances like McGloughlin’s, there were several players that were played well throughout the game.

Mullett gives credit to a tough schedule for the success of the team this year.

“I think it was our slow start and having some tension put on us prior to the game against Bethel University, who won the Great Lakes Conference last year,” Mullett said. “We knew that would be our toughest game of the year and that we had to come together for that week in order to keep ourselves in contention for our conference and the National Playoff. That game we did come together. We played very well and won to put ourselves in first place in our conference. Now, we’re playing at a higher level with higher expectations of ourselves.”

Asked about his favorite moment from the game, Mullett was happy to see a first-time player be able to make an impact.

“My favorite moment would have to have been the last ten seconds when Luke Gruchot scored a try in his first game,” Mullet said. “In the closing moments, he picked up the ball and made a good play. He ran it forward through about seven people and found the end zone.”

Now looking forward to the rest of the season, Coach Mullett is trying not to get ahead of himself, but he’s excited about the potential of this year’s team.

“We see the prize now and realize that we can’t just fumble it away,” Mullett said. “We have to actually show up, play hard and finish this season so we can clinch the playoff. There’s only 16 teams that qualify for the National Playoff, so there’s a small margin of error for us to make that each year.”

Right now, the lakers are two games away from finishing the season undefeated and winning their conference. Before Saturday’s win against SVSU, they were ranked no. 9 in the nation. Next week, they will take on rival Ferris State at home before they finish off the season against Oakland University Nov. 2.