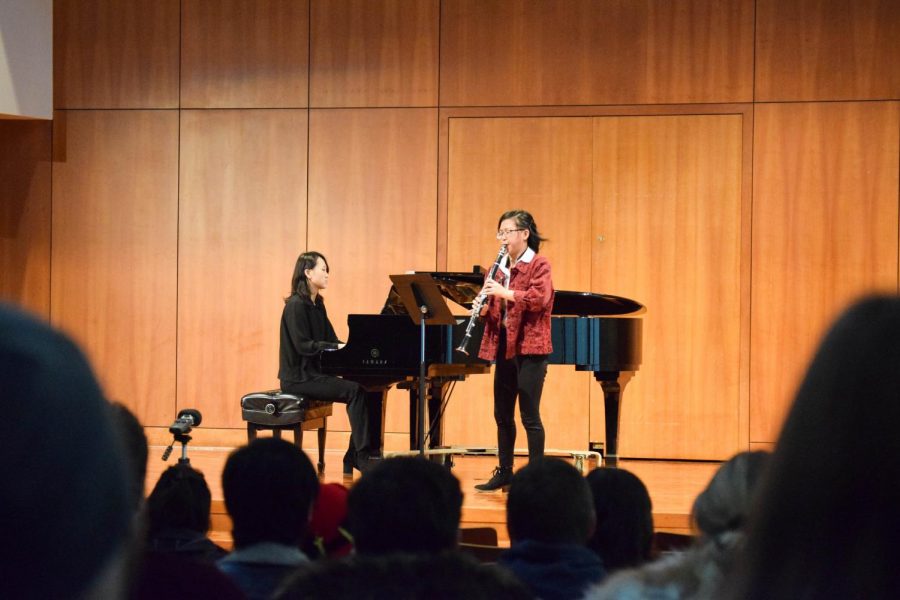 On Saturday, Oct. 26, Grand Valley State University held its annual 20th/21st Century Piano Festival, gathering students from far and wide to share in a day of recitals, music and a love for creating and performing pieces.

The festival was held in the Sherman Van Solkema Recital Hall in the Haas Center for Performing Arts, consisting of 50-minute performances. The event stretched from 9 a.m. to 3 p.m. with scattered breaks. GVSU students as well as the general public were invited to attend this free event and enjoy the music all day long.

Founding Director Helen Marlais began the event in 2008 as a festival and a competition. Her goal was to give pre-college students the ability to perform pieces from the 20th/21st century, as she felt that this era of music is often overlooked in yearly performances for students.

“The world of music is a very special one, and there has been so much excellent music written in recent centuries,” Marlais said. “This music needs to be heard and appreciated. Classical music is alive and well, as well as the wonderful art of piano playing.”

Marlais passed the torch in 2015, as Sookkyung Cho took over the event. She is currently in charge of the registration of the performers, organizing the program and communicating with other professors to put the festival together.

The event is now a state-wide piano festival housed at GVSU that includes performances from students of all ages, as well as a featured composer. The composer is chosen by either Marlais or Cho. This year’s composer was Sun-Young Park.

Park was born in South Korea and has received many awards stretching across the United States and the globe since beginning her career in music with violin studies at the age of 6, and composition at 17.

Some of her honors and achievements include winning the 44th Pan Music Festival International Competition with Pierrot for Violin and Piano, and the New Juilliard Ensemble (NJE) competition; as well as one of her most recent pieces, HEEM, being performed by the Allant Trio in New York — as it was invited to be performed in the Carnegie Weill Recital Hall.

The New York edition of The Korea Times described her sound as a combination of Western music and Eastern sound, more specifically that of Korea.

Park was asked to compose a special piece for the event, and two GVSU piano students were chosen to perform before each recital. The recital was the world premiere of this new piece. Park worked with the students every step of the way, giving her own feedback whilst helping them prepare for their performances.

“For this particular concert, we started working together about two weeks ago,” Park said. “Sookkyung Cho started sending me (the students’) work and then I would comment through a Skype or email session, or on the phone. The whole process was several months from the moment Sookkyung Cho commissioned me and I wrote the music and then got to practice with them.”

She also spoke before each section of performances, explaining her journey through her career path and what her new piece represented.

“My role is to not only come here and direct and rehearse with the performers, but to really interact with the kids and the students and the audiences here,” Park said. “Festivals like this are amazing as a composer, it’s especially really valuable to living, 21st century composers. It is important as a composer to have this kind of experience where they invite you to have an interactive, creative process with the performers to let them know that there are still living composers working through to expand this repertoire of classical music.”

Following Park’s introduction and the performance of her piece, students of all ages individually performed their works for the audience in attendance and were judged by Park, among others, to receive a trophy at the conclusion of the event. Each student received a participation certificate at the end of their performance as well.

Cho hopes that students who attended and participated in the event enjoyed themselves and got good performance experience under their belts.

“College students got to play a few different times throughout the day, so they got to experience how different performances can be,” Cho said. “For younger students, not only did they love being on stage in front of a lot of people, but they were inspired by older ones; because I put all of the age groups all together — first through twelfth graders and college students.”

The event wrapped up as being a day full of music and learning experiences for everyone, celebrating the repertoires of the new age.