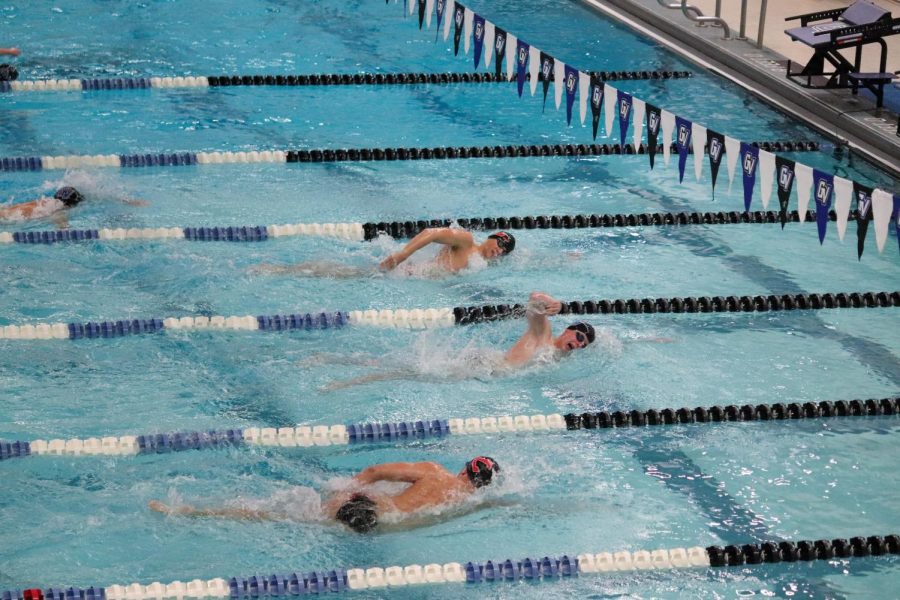 On Saturday, Oct. 26, the Grand Valley State University swimming and diving team (7-0) competed against Lewis University (2-1). However, the Laker swimmers weren’t featured in their usual events.

Instead, head coach Andy Boyce decided to give his swimmers different races than the ones they’ve held this season. It gave GVSU’s team a chance to compete in events they can qualify for in the upcoming GLIAC playoffs. The Laker men’s team beat Lewis 184-102. The women’s team won 195-90.

“Sometimes when you do the same event over and over again, it gets old,” said head coach Andy Boyce. “It’s good for them to get out there and do something a little bit different.”

The first event of the meet was the 400-yard medley relay. Both Lakers “A” relay teams won their event. The women’s team beat Lewis’s relay teams with a time of 3:47.62. The Lakers men’s A-team placed first, swimming a combined time of 3:30.13.

The Lakers again showed their dominance in the 1,000-yard freestyle events. As Boyce advised, GVSU featured different swimmers in this event than usual.

Senior Melina Goebel took first place for the women in the event with a time of 10:48.31. Sophomore Keegan Hawkins won the men’s 1,000-yard for the first time this season, swimming with a time of 9:47.54.

The long distance events continued with the 500-yard freestyle. Freshman Bianca Licari took first place with a time of 5:19.74. The race was very close and Licari showed no signs of slowing down after taking first earlier in the meet during the 200-yard butterfly.

Sophomore Jesse Goodyear also improved on his already excellent season in the 500-yard event for the men’s team. He once again won the event, continuing his winning streak with a time of 4:41.37.

“In the 500, I felt good — (the other swimmer) was pretty close to me at the start, and I was a bit shocked,” Goodyear said. “After the first 150 meters, I got away from him. After I got away I just had to hold my pace. It was a really comfortable race to swim after I got ahead.”

Freshman Roger Miret Sala won a very close battle in the men’s 200. In the last seconds of the race, he was able to beat the Lewis opponent with a time of 1:44.87. Senior Harry Shalamon, won the men’s 100-yard backstroke for the Lakers. He placed first with a time of 52.22. Freshman Neta Shiff took first place in the 200-yard freestyle with a time of 1:57.75.

In the 100-yard breaststroke events, freshman Delaney Wihebrink won the event for the lady Lakers, winning with a time of 1:05.16. For the women’s 200-yard butterfly, Licari once again took first place for the Lakers with a time of 2:10.63.

The women’s team also won the 200-yard backstroke. Sophomore Melina De Cort won the very tight race with a time of 2:09.55. Senior Harry Shalamon continued his dominance in the backstroke for men this season. He again beat all of his competitors in the pool, posting a time of 1:05.05.

The last two events of the meet were the men’s and women’s 400-yard freestyle relay. The women’s A-team for the Lakers won the event at 3:38.82. After falling behind early in a close race with Lewis’s relay, the GVSU men’s team won, clocking in at 3:11.38.

Next week, the Lakers take on Northern Michigan University at home. The Wildcats are one of GVSU’s toughest opponents. GVSU will not shuffle it’s lineup again against Northern Friday, Nov. 1.

“It’s going to be a close meet,” Boyce said. “(Northern Michigan) played really well last weekend. It will be good competition for us. Our team always seems to rise to the occasion.”