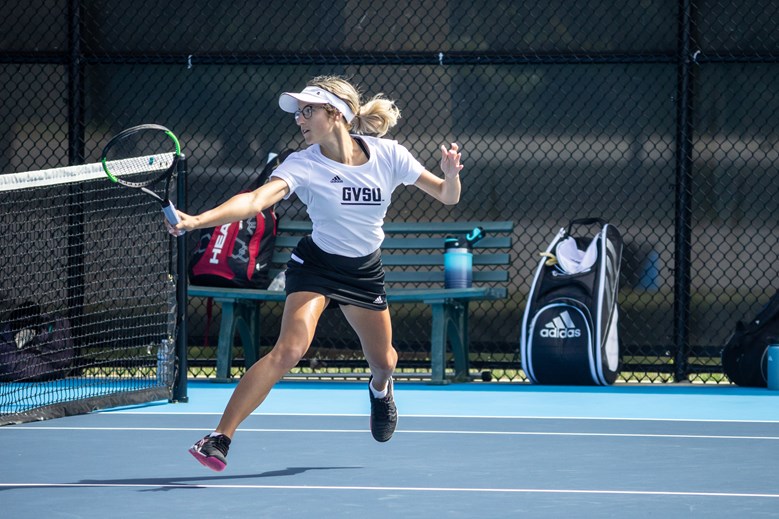 Grand Valley State Women’s Tennis started out the 2019 GLIAC Championships on a good note Friday. At the tournament, held in Midland, the Lakers started out with a sweep against Ashland by a score of 4-0, whom they beat the week before.

On Saturday, the Lakers’ success continued as they took on Michigan Tech.

“It was a good team effort today,” said GVSU coach Samantha Schall. “We won two out of three doubles matches, so that was a good way to start the day, and our No. 3 team didn’t win, but bounced back well for their singles matches.”

To go along with their success in doubles, the Lakers had a good day playing singles. In the most important tournament of the year, the lady Lakers came together as a team.

“We won the first three singles matches that we had,” Schall said. “Marily [Canellopoulos] was the first one to win her singles match, at No. 4. Vera [Greva] won her singles match at No. 1 next, and then it came to our freshman, Taylor Barrett, who was playing in the No. 3 position. She won the first set on a tiebreak and the second set 6-2, so that was a really good performance from her to clinch the match for us.”

Although they play in several tournaments throughout the year, Schall said that this one had a much different feel. There are multiple different tournaments throughout the year that the team participates in, but not all of them are both singles and doubles competitions, and only the GLIAC Championships bring together everyone in the conference, which creates a unique experience.

“The atmosphere of this tournament is really different,” Schall said. “The other tournaments that we’ve had were individuals with the men, but this is a team tournament so all the teams from our conference are here. It’s really nice that we get together in the beginning and have an award ceremony before everyone goes and plays their matches. It’s competitive when we’re in the matches but outside of them it’s a really good and supportive atmosphere.”

As apart of the ceremony that Schall referenced, the Lakers received a few awards. Greva was named the GLIAC Player of the Year, as well as a member of the All-GLIAC First Team, alongside teammate Taylor Barrett. Marija Leko and Canellopoulos also received honors, being named to the All-GLIAC Second Team.

“I’m really proud of the girls that received awards for the All-GLIAC First and Second team,” Schall said. “The girls worked really hard and they all deserved to be recognized for what they do.”