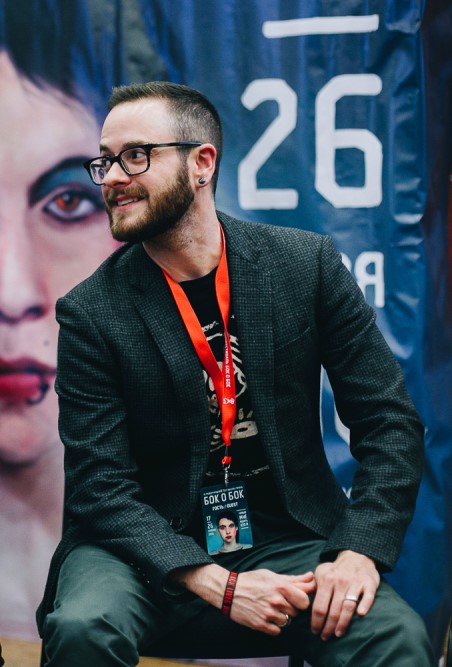 Professor Cáel Keegan has taught a number of courses during his time teaching liberal studies and women, gender and sexuality studies at Grand Valley State University, with subject matter ranging from American studies to comic books to film and cinema. His research on transgender cultural production, which is frequently explored in his classes through the works of trans artists, writers and filmmakers, was recently awarded with the National Women’s Studies Association Trans/Gender-Variant Caucus Paper Award.

“We’re in a moment where trans, gay and women’s issues are often pitted against each other,” Keegan said. “Some feminist spaces aren’t welcoming to trans people because there’s this need to maintain the category of women in a very specific way, and in gay politics there’s a need to stabilize gender to discuss sexuality… The problem is that trans folks don’t have the same relationship to gender. If you’re a trans person, you might have fought really hard to have your gender recognized, so you’re not going to just go around saying ‘abolish gender.’”

This was the subject of “Getting Disciplined: What’s Trans* About Queer Studies Now?” the article that won Keegan the Caucus Paper Award.

“I wrote that piece very much from my own personal experience as someone who feels caught in the middle between these disciplines, women’s studies or queer studies, never really having a place to articulate my work and my own thinking,” Keegan said. “It turns out a lot of other people are having that experience. I was surprised that so many people who are having to teach trans issues as identical or as a subset of queer studies read my article and were like, ‘Also me.’”

Despite the roadblocks, Keegan notes that the last decade has been a great period for the development of trans studies as a field.

“Trans studies has been around for a long time, but it hasn’t been formally recognized as a subfield or its own field until 2010, and we didn’t have a journal of record until 2014,” Keegan said. “It’s been really exciting working during this period. A lot of departments that originated as women’s studies have shifted to becoming more intersectional in their approach, to varying levels of success. Queer and trans studies, which I think have a lot to offer students in terms of critical thinking and diversity, are nationally much less central to what we call women’s studies as a field. We still don’t have a trans studies course at Grand Valley at all, which is something I’d really like to get off the ground. It’s very much viewed as ‘additional to.’”

Much like women’s studies, transgender studies is an interdisciplinary field that incorporates history, political theory and media analysis. But as Keegan demonstrates in his book “Lana and Lilly Wachowski: Sensing Transgender,” the two fields have different approaches to their work.

“It’s very popular to just look for examples of representation in media,” Keegan said. “I am not necessarily analyzing examples of representation. I argue that the Wachowskis’ movies are trans, or have a trans aesthetic, even when they don’t have trans characters. That’s why you can make the argument that The Matrix is a trans blockbuster; the whole film proceeds from a trans sensibility about reality and perception. A lot of people are saying that Lana Wachowski is about to make trans history by directing The Matrix 4. But we have a global blockbuster directed by trans women. It was The Matrix. She already did that. When does someone become a queer or trans artist? When they come out? When the media becomes aware of your identity?”

“I really just want people to take more classes on this stuff,” Keegan said. “I think there’s a perception of ‘why would I take that, it’s just a tiny community,’ but once you get into these courses you find out you can learn a lot about American history and about the systems that organize our society,  even if before you think, ‘Well I’m straight. I’m cisgender, why would I?’”