What “weed” like to know: GV holds marijuana panel 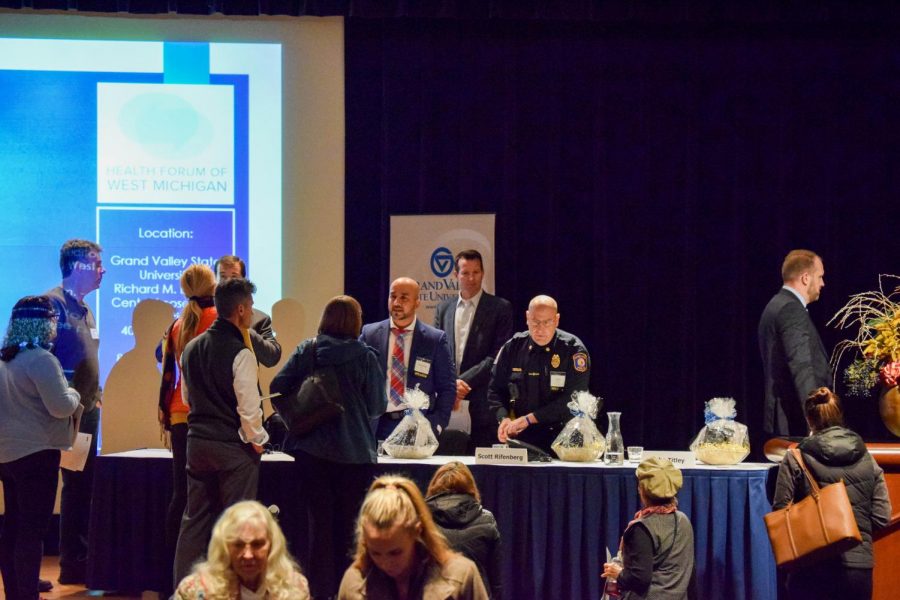 To the joy of many Michiganders, marijuana has become legal in the state of Michigan. Since then, there has been concern that the public is insufficiently educated on the specifics of the law, as well as the potential risks of marijuana use.

On Nov. 1 Grand Valley State University hosted a convention with a panel of knowledgeable authorities to discuss plans for adapting to this newly legal drug. The event, called Legalizing Marijuana: Implications in Health Care, was held in the Loosemore Auditorium on GVSU’s Pew Campus.

Executive Director of the Marijuana Regulatory Agency Andrew Brisbo kicked off the event with a presentation that covered commercial applications, medical marijuana cards and safety.

Michigan has begun accepting applications for commercial facilities in the marijuana industry. So far, 1,106 applications have been submitted. One hundred and seventy-five provisioning centers, 143 growers, 19 processors, 12 transporters and six labs make a total of 355 approved licenses.

Michigan has the second highest number of medical marijuana cards, behind only California. Unlike many people predicted, the number of card users in Michigan dropped after marijuana became legal, going from 290,000 card holders in 2018 to 277,000 in 2019.

In order to achieve a medical marijuana card, a person must have a qualified and ongoing condition. If a condition isn’t on the list of conditions that qualify, people are allowed to petition for it to be added. So far, 13 conditions have been added, including PTSD and autism.

However, the registry card program is not a regulatory program. There is no oversight or inspection of the cardholders, and their cards cannot be taken away.  The Marijuana Regulatory Agency aims to put safety measures into place as marijuana becomes a more commercialized product.

“We’re not creating a market when one already exists,” Brisbo said. “We just need to wrap our loving, regulatory arms around it.”

Addiction psychiatrist Dr. Mandeep Bath followed Brisbo with a presentation about addiction risks and potential health impacts. The presentation focused mostly on the long term impacts created by smoking marijuana starting at a young age. The endocannabinoid system is where the brain develops in adolescent years and is also where the impact from THC consumption occurs. Chronic exposure desensitizes the sensors here and requires more of the drug to get the same high.

“While recreational usage may not always lead to abuse, the transition from use to dependence occurs faster for cannabis than for alcohol or nicotine,” Bath said.

Many side effects come from the use of marijuana, both short and long term. In the short term, users can experience panic, fear, hallucinations, an altered sense of time, increased appetite, slowed reaction time and many more.

The long term effects are not as specifically known. Heavy usage has been documented to lower testosterone and sperm count, lower IQ, show poor memory and motivation, contribute to respiratory diseases such as chronic cough and bronchitis and impact fetal growth in pregnant women.

The next presentation, led by Deputy Chief of Policy Scott Rifenburg, focused on law enforcement and application in Grand Rapids. He began the presentation discussing the different forms that THC can be ingested in and the legal amount to possess.

The city smoking ban, originally focused on cigarettes, also applies to marijuana, meaning that it cannot be smoked in public. However, use on private property is legal. Rifenburg even compared drinking a beer on your porch to smoking a joint in the same location; both are equally as legal now.

While there is no legal limit for marijuana consumption, police officers will still be stopping people for reckless driving. They are in the process of testing an oral fluid tester, a Breathalyzer equivalent for marijuana. The unit is still in the pilot phases and the department owns only one, given that each unit costs approximately $5,000.

“Out of more than 300 tests we have done with this device, we’ve only had one false positive since we started two years ago,” Rifenburg said, “The false positive was because of a different prescribed drug.”

The final presentation was given about the current state of law and other legal aspects of marijuana consumption by corporate attorney John Titley.

His main focus was on employee rights when it came to THC consumption. Under the American with Disabilities Act (ADA), employers are not obligated to allow their employees to smoke on the job and can legally fire them for failing a drug test due to marijuana usage.

“An employee is within his rights to go home a smoke marijuana on a Friday and even if he doesn’t smoke the rest of the weekend, he will still test positive for a drug test when he comes into work on Monday,” Titley said. “It is within the employers’ right to fire him.”

Even if an employee is a registered medical marijuana card holder, it is legal for an employer to fire them over marijuana usage, as courts have ruled.

Though some employers have decided to keep their rigid zero-tolerance policies, many are adapting their policies to be more lenient of their employees.

After the panel gave their presentations, they held a brief Q&A session with attendees to discuss any questions not answered by the presentations.