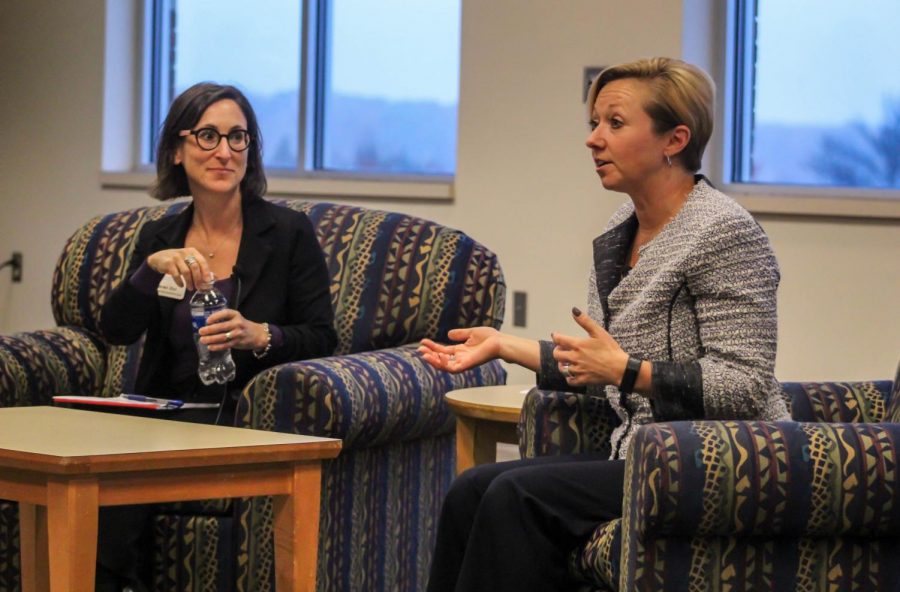 Grand Rapids Mayor Rosalynn Bliss made history in 2016 when she became the first female mayor of Grand Rapids, as well as the youngest mayor in over 130 years.  To name just a few of her many accomplishments, she has over 20 years of experience in the fields of domestic violence and child welfare, and began her work in politics in 2005 serving as a Second Ward City Commissioner for 10 years.

This year, Bliss was named the third Frederik Meijer Endowed Chair in Entrepreneurship and Innovation and is currently teaching HNR 312, a junior seminar on leadership and problem solving, according to the Frederik Meijer Honors College.

On Oct. 30, Bliss spoke to a packed room of students and faculty as part of the Frederik Meijer Lecture series.  Her conversation with political science professor Karen Zivi focused on her path to becoming mayor and the challenges she faced along the way. The conversation was followed by a question and answer session where members of the audience were able to ask Bliss their own questions.

Bliss said she never expected to become involved in politics, but was encouraged by friends and saw the impact decisions had on children and families in the city.

When speaking about the challenges she faced as the only woman on the city commission at the beginning of her career in politics, she offered insight to the audience about dealing with unfair criticism and difficult situations.

“The first year was an interesting journey,” Bliss said. “I wasn’t even sure if I would run again.”

In order to get up to speed for her job, Bliss took the time to visit places around the city her decisions would impact, such as the wastewater treatment plant, water pumping station and fire stations.

“If you’ve given it your best and taken the time to prepare, you’ll feel more confident,” Bliss said.

Marissa Gonzales, who attended the event as a requirement for her freshman honors college sequence, said she learned a lot about Grand Rapids and was impressed by Bliss’ experience in government.

“I really like our mayor, I knew nothing about her other than the short biography that we were given before going,” Gonzales said. “I’m not one for politics, but the way she described it was different than what I thought being mayor would be.”

Gonzalez said she was surprised and impressed by the issues Bliss has taken on during her time as mayor, such as sexual abuse, racial disparity, health and sustainability.

Bliss said seeing the results of projects she took part in is one of the most rewarding parts of her job, despite the many challenges.  She also thinks it’s important that people are able to speak their mind to her, even when they disagree, and values relationships with her constituents.

“People have a right to be heard by the people in our seats,” Bliss said. “That goes back to building people’s faith in the government.”