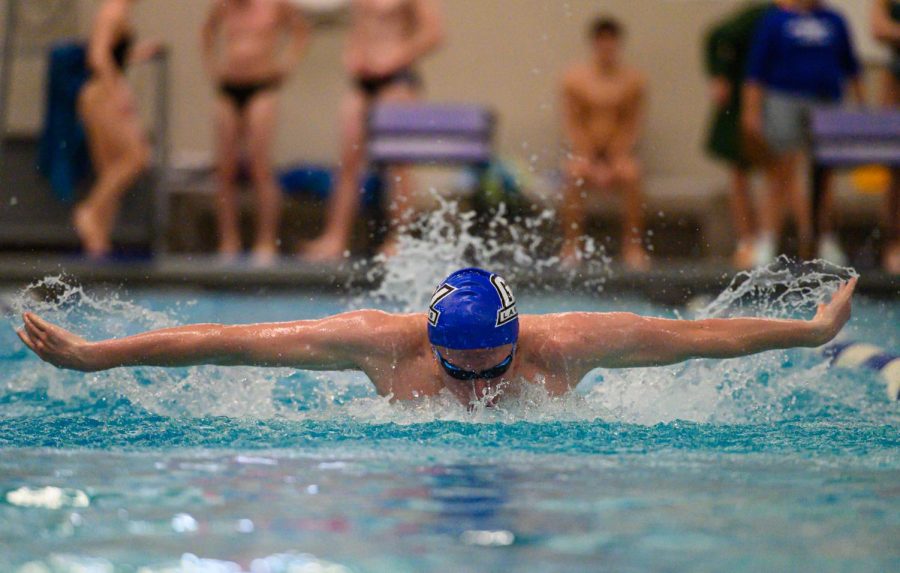 The Grand Valley State University (9-0) swimming and diving team beat their biggest rival against Northern Michigan (11-3) Friday, Nov. 1. Northern has been GVSU’s toughest opponent so far this season, and the Lakers came out to swim. GVSU’s men’s team beat Northern 206-94, and the women’s team won 159-141.

The men’s Lakers team beat the Wildcats in almost every individual event. Freshman Roger Miret Sala won the 200-meter freestyle with a time of 1:43.17.

The team held firm control in the long distance events. Sophomore Jesse Goodyear and junior Moritz Bartels also continued on their excellent seasons in the distance freestyles. In the 1000-meter freestyle Goodyear took first with 9:38.64 and Bartels finished second with 9:38.64.

In the 500-meter, Goodyear again won with a time of 4:43.67 and Bartels again finished second with 9:45.84. Bartels beat Northern swimmer, junior Ondrej Zach, in the 500 by milliseconds. In an extremely close race, Bartels beat his opponent by 0.16 seconds.

“I knew the Northern swimmer was close to me and was trying to catch me at the end of the race,” Bartels said. “The last five yards I just didn’t breathe and I didn’t want him to catch me. I pushed hard and it worked out.”

Sophomore Keegan Hawkins also continued his exceptional season for the Lakers by winning the 100-meter breastroke with a time of 57.75. He also took first in the 200-meter IM with 1:54.35.

“I was a bit tired and had some bad technique in the 100,” Shalamon said. “The pool record for the 200 is set by a Northern Michigan player. I was going for it but I didn’t make it. I’ve still got a couple more meets to do it.”

The women’s Lakers team featured familiar faces taking first place on the scoreboard. Senior Melina Goebel took first in the 200-meter freestyle with a time of 1:56.62. Freshman Delaney Wihebrink again won the 100-meter breaststroke for GVSU finishing with a time of 1:05.16.

Freshman Neta Shiff displayed her distance skills again against Northern Michigan. She won the 500-meter freestyle, a frequent event for the Lakers, with a time of 5:06.64. She also took first place in the 1000-meter freestyle with ease. She posted a time of 10:20.45, and was out of the pool before the other competitors in the event had even finished.

Sophomore Samantha Laurich had a standout performance, finishing first in two events. She won the 200-meter breaststroke with a time of 2:23.57 and the 200-meter IM finishing with 2:12.38.

“The women’s team came right down to the wire,” GVSU coach Andy Boyce said. “The last two events decided the meet for us. Laurich stepped up by winning the 200 IM and pushed us over the top for the victory.”

Karasek won with 290.48 points and Kelly placed first for the men with 257.63 points. Karasek’s impressive dives also translated to the 1-meter diving event. She won the event for the women’s team with 276.6 points. Freshman Illusha Gerasimchuk  won the 3-meter event for the men’s team for the first time this season with 277.57 points.

Against their toughest opponent this season, the Lakers won with strong individual performances on the scoreboard.  The contribution of points from all the GVSU swimmers displayed the depth of the team.

The Lakers swam vigorously against their rival in one of the most anticipated meets of the year. Their camaraderie was also a factor with players encouraging and cheering on their teammates in every event.