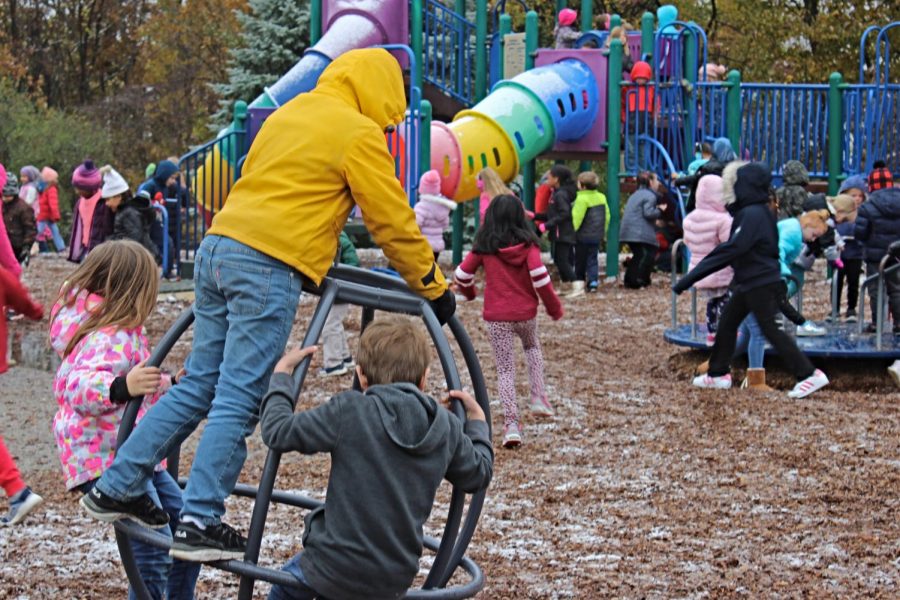 Recently, Michigan has faced many challenges in K-12 education, such as teacher shortages and dwindling budgets. Teacher-to-student ratios have swelled, resulting in less individualized education.

GVSU adopted an emphasis on K-12 education  under the leadership of former President Arend “Don” Lubbers, who came to the then-college in 1969. Since then, the university’s focus on K-12 education has not only increased, but flourished.

Today, GVSU authorizes 78 charter schools throughout the state, making it the largest authorizing body in Michigan. While the main goal of these schools is to provide students and their families with different education options, there are many opposing thoughts and misconceptions surrounding charter schools. GVSU’s role as an authorizing body allows these schools to provide a community for future Lakers to connect with students of similar backgrounds.

“Charter schools are actual public schools,” said Michael Cousins, Charter Schools Office Manager of Communications. “That’s one of the biggest misconceptions that’s out there — that charter schools are not public. That’s not true. They have to take any student that comes to them.”

Unless there are more applicants than available spots, charters can’t turn students away. When this happens, names are randomly picked during a public meeting through a lottery-system. The names that are not selected are added to a waiting list.

While charter schools are public, they do differ from traditional public schools. There are different rules for forming school boards, funding schools and in the flexibility of school curricula.

In traditional public schools, the board is elected. However, Cousins said that the process is very different for charters. The existing school board is responsible for finding a potential candidate and sending that recommended candidate to the authorizing institution — in this case, GVSU. The authorizer then runs background checks and has to approve of the candidate.

The curriculum that charter schools adopt varies from school to school. While each school must achieve state standards and administer tests like MSTEP and SAT, charter schools have flexibility in the curriculum. Some schools have focuses on art and design or math and science. Cousins cited the Flint Cultural Center Academy as one of these schools, since the curriculum allows students to learn in art institutes and museums instead of being restricted to classrooms.

While GVSU supported charters throughout its earliest years of operation, becoming a leading authorizer of charter schools has not come without controversy. Historically, charter schools have been criticized for taking money away from traditional public schools and challenging the status quo of traditional learning.

In an interview with with GVSU’s Charter School Office, Lubbers said that the university’s support of charter schools resulted in some local school districts threatening to not take GVSU’s student teachers.

With this in mind, Lubbers had to work proactively with the nearby traditional public schools.

“I would meet with the superintendents of the districts around us, where we chartered schools, and even where we didn’t, and invite them to a luncheon,” Lubbers said. “We’d talk about these issues, what their problems were and how the charter schools were affecting them. I made a deal — not a signed contract — but I made a deal… we will not charter more than one kind of school — that is high school, middle school, elementary school — we will not charter more than one in your district.”

GVSU’s first charter school, Excel Charter Academy, opened in 1995 under Lubbers’ direction. This K-8 school is still in operation. While GVSU faced some backlash from the decision, Lubbers said he believes traditional public education needed some competition in order to see continued improvement.

Grand River Preparatory High School Principal Koree Woodward spoke about the school’s efforts to better prepare students for college and provide equal opportunities for each student. Their curriculum requires two AP courses in order to graduate as well as a senior shadowing day that allows students to explore different careers.

Woodward said that while other schools limit AP classes to students based on good grades, Grand River accepts every student and works to make AP classes achievable regardless of previous education. She elaborated that since 70 percent of the school’s population is nonwhite, the privilege gap may be larger, and making AP classes accessible allows the school to combat inequality in education.

With an emphasis on college preparation, charter schools often work to ease the transition out of high school. Manager of Charter Through College Programs Barry Hall said these programs, called Pathway Programs, are important because they expose students to a college environment and help them create a sense of belonging.