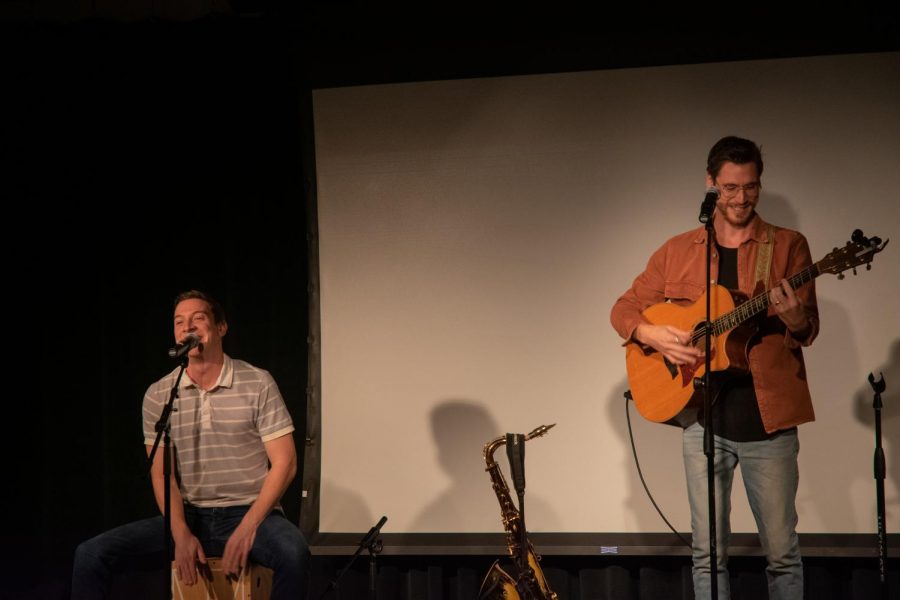 On Tuesday, Nov. 5, the Grand Valley State University Campus Activities Board (CAB) and an eager audience welcomed the band, The Culdesac Kids, to perform for their annual event entitled, “The Coffeehouse Concert Series.”

The performance was held in Area 51 in the Kirkhof Center at 8 p.m. The free concert was open to all students, and provided a relaxing “coffeehouse” like atmosphere that was filled to the brim with friends, coffee, hot chocolate and donut holes for all to enjoy.

The Culdesac Kids are a band of two — including Stevie Jo Rosenbalm and Collin Hauser — from Dallas, Texas. Both members sing, while Rosenbalm plays the cajon and Hauser plays the guitar and saxophone. The band covers a wide range of genres from the blues and jazz to pop and indie pop.

According to Rosenbalm, the pair was a match made in heaven since day one.

“We met four years ago in late 2015 and it was because I joined a big crazy twelve piece cover band for weddings and corporate events,” Rosenbalm said. “Collin was in it and was singing and playing the saxophone and the company needed a singer. I was living in Austin and just kind of fell into the band; and we met and hit it off instantly. We knew we were going to be friends for life.”

The Live Music Director of CAB, Teri Jones, was in charge of organizing this event and booked The Culdesac Kids in September at a National Association for Campus Activities (NACA) convention.

Jones said from the moment she heard the band perform she knew they would be the perfect remedy for stressed students during the busy semester.

“I love their music, I love their personality. There’s something about them that gives off this vibe where you can just go up to them and have a cool conversation,” said Jones. “I hope the audience left relaxed because it’s November, it’s a stressful time of the semester. So my hope is that they can just say ‘Oh, I really like The Culdesac Kids, I think I’ll listen to them.’”

But, The Culdesac Kids were not alone; GVSU’s a capella group, GV Groove, kicked off the night by performing three songs for the crowd.

The President of GV Groove, Jillian Bucaro, said that the group loved opening for the band, and valued the experience greatly.

“I think it’s really cool when you get to open up for another music group because it’s like musicians sharing with musicians and encouraging each other and seeing what each other is able to do,” Bucaro said.

However, it was not just GV Groove that benefit from their opening act. The band felt that their performance set the perfect mood, and created a fun atmosphere to be in for the evening.

“GV Groove set a great tone for the rest of the night,” Hauser said. “It was so cool to have talented students perform. They made up a portion of the audience too, which made it even more rewarding for us to be able to sing for vocalists that could tell the intricacies of what we might be doing that somebody else may not be able to. It makes it more enjoyable for us because we know that they understand.”

Rosenbalm agrees, and felt that GV Groove being there even took his performance to another level.

“[Their opening] was a much bigger help to the overall vibe than I think anybody even realizes” Rosenbalm said. “There was almost a bit of nerves on that aspect of things because it was like ‘Man, they’re going to hear everything.’ It made me want to be better for them, so that was cool. I think it made my performance better.”

As much as the performers were able to help each other, the audience had a large impact on the concert as well.

“It’s really fun playing intimate shows like this, smaller shows where there’s about 30-50 people,” Hauser said. “It feels like you get to know the audience as a collective personality. The audience tonight was really checked in and attentive and intentional about listening, and that makes us better.”

The band hopes that the audience was able to let go and have fun, and that they know how important it is to not take themselves too seriously.

“We’re trying to keep it light in the sense that nobody is taking themselves too seriously, it doesn’t have to be such a big deal,” Rosenbalm said. “I hope they take away just finding the stupid humor in everything.”

Hauser agrees, and feels that the atmosphere was so special because everyone was there to be with one another, and soak up the tunes being played.

“When Stevie and I come together it really turns into something fun,” Hauser said. “It’s about the music and the fun and the experience. It’s not about us or the audience, it’s about all of us having a good time. No one’s more important than anyone else, the audience or the performer. It’s all of us together.”

The night concluded with hugs from the band members and the exchanging of social media accounts to stay in touch; everyone benefitting from a night of sipping, singing and smiling together as one.