No. 3 GVSU women’s basketball open up with pair of wins on the road 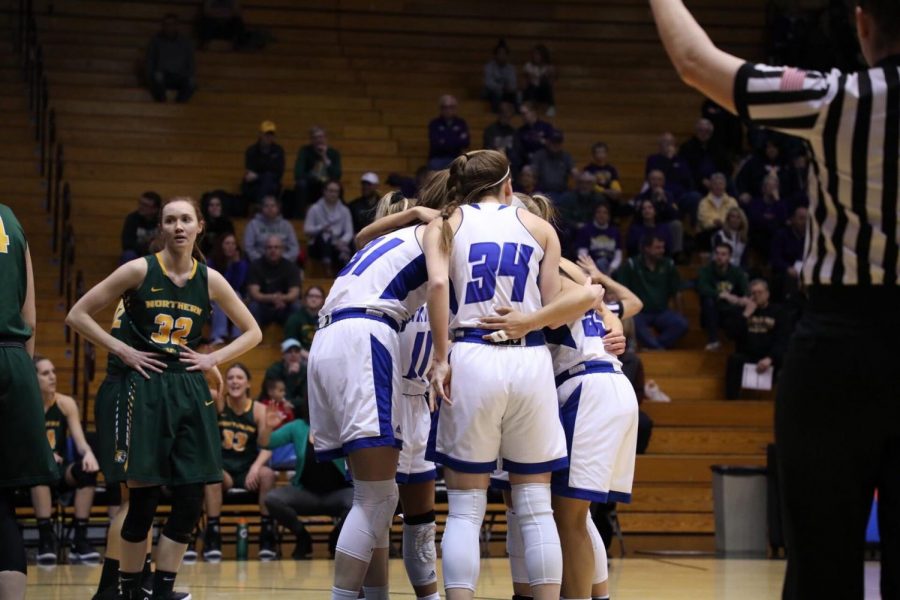 The No. 3 Grand Valley State University women’s basketball team cruised to a season opening win over University of Missouri-St. Louis on Friday, Nov. 8, 78-44. The Lakers’ balanced offensive attack saw 12 different players notch a field goal while shooting 50.8 percent (30-59) from the field and 81.3 percent (13-16) from the charity stripe.

With the win, GVSU remains undefeated in season openers under head coach Mike Williams, having gone 5-0 in game one since Williams was brought on board as head coach.

“I think most importantly it kind of helps reassure that you’re preparing the right way,” Williams said. “We always want to get better as the year goes on but we also want to be ready once game 1 rolls around too.”

Senior center Cassidy Boensch led the Lakers with 17 points, 11 rebounds, six assists and three blocks, while senior point guard Jenn DeBoer and freshman forward Haley Swing contributed 12 and 10 points respectively. The Lakers’ bench outscored UMSL’s bench 36-24 and helped take control of the game in the second half. As a team, GVSU out-rebounded the Tritons, 37-30, and outscored them in the paint, 44-20.

“I think it was a total team effort tonight,” Williams said. “Everyone did their part, whether it was a basket here or securing a rebound there. We have a really great group of girls who put in the work and it showed tonight.”

The Lakers trailed 2-0 in the first minute of the game, but never trailed the rest of the game after a Maddie Dailey three-pointer broke a 2-2 tie. After building a 14-8 lead, GVSU would go on a 9-0 run, capped off by back-to-back layups by sophomore guard Emily Spitzley. The Lakers led 23-10 after the first quarter and entered the half up by 23 points.

Coming out of the half, GVSU continued to put their foot on the gas and led by as much as 34 points in the third quarter and increased their lead to 40 with 5:47 to go in the fourth quarter before the final buzzer sounded, giving the Lakers a 34-point victory.

“Before the game, we talked about three things: getting good looks, keeping them off of the free throw stripe and limiting second chance opportunities,” Williams said. “I think we took a lot of good shots and did a good job doing the latter two as well which allowed us to jump out to that early lead and not really look back.”

The Lakers continued their dominance and won big on the road Saturday, Nov. 9 with a 94-50 win over the Maryville Saints to improve to 2-0 to start the season.

Boensch scored 19 points on 9-11 shooting with three assists, seven blocks and three steals while Dailey scored 17 points on 7-11 shooting from the field.

“Cassidy is a confident player and she has put in a lot of work on her game,” Williams said. “Her defense is excellent, but her next step has been expanding her game out onto the perimeter so that when teams focus on her she can find her teammates on cuts and pick plays.”

Williams said he is pleased to see early contributions from the team’s freshmen class.

“I think they’re playing with a lot of confidence,” Williams said. “Whether it’s been Daisy, Courtney or Hailey, who has played really well early, they all put in time on their game outside of practice and its starting to show.”

A dominating first quarter set the tone for the afternoon as the Lakers jumped out to a 36-13 lead. GVSU went 14-19 from the field, 4-4 from three, while holding the Saints to just 4-15 from the field to break away early. GVSU scored the first 13 points of the game over the opening four minutes

A 21-9 second quarter continued to build the separation and allowed the Lakers to go deep into their bench in the second half, which got some younger players valuable reps while also giving the starters some rest.

GVSU cruised through the rest of the game, shooting 15-28 in the second half while outscoring the Saints 37-28. The Lakers made at least seven buckets in each quarter, as the offense impressed no matter the lineup.

GVSU will play its first home game of the season next Sunday, Nov. 17 against Lewis University starting at 1 p.m.