Student Senate readdresses Pledge of Allegiance, removes it from agenda 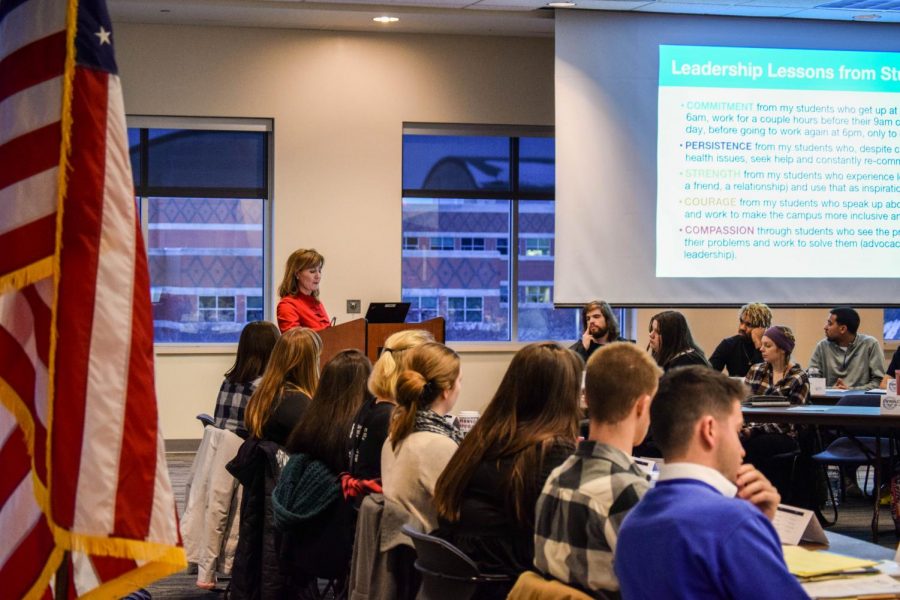 Grand Valley State University’s Student Senate once again voted on whether to include the Pledge of Allegiance in their weekly agendas during their Nov. 14 general assembly. The vote included 23 for, 10 against and 10 abstentions in a motion to remove the pledge from the agenda, overturning an earlier decision to reinstate the pledge in October.

The pledge had been removed earlier this year following a cabinet vote, but was added back to the agenda in October after its absence was noted. The most recent vote removes both the Pledge of Allegiance and the State of Michigan Motto from the agenda, leaving the newly-added Student Senate Creed in its place.

During both votes in October and November, public comment was filled with passionate community members from both sides of the argument. During the Nov. 14 public comment, students and faculty alike shared their thoughts, with the majority of this meeting’s comments being pro-pledge.

However, there were members of the gallery that still had strong feelings to keep the Pledge of Allegiance off of the agenda.

“I am a student who no longer feels supported or represented by this elected governing body,” said GVSU student Maddie Clare, who also spoke at public comment. “Personally and professionally, the Pledge of Allegiance is something which I almost always opt out of… I have no allegiance to pledge to the federal government as someone who feels entirely unsupported by its figure heads.”

Following public comment, which included 12 speakers total, student senators shared their thoughts, with strong proponents for and against the pledge.

Student senator Dorian Thompson, who initially spearheaded the return of the Pledge of Allegiance to the agenda following its removal, took the floor early, noting that Student Senate’s actions at the meeting would be seen throughout the community. Thompson noted several reasons to continue to say the pledge, such as to honor veterans like his great grandfather and to note the federal funding provided to the university, all while supporting the values outlined in the Pledge of Allegiance.

“I’ve had members of Congress ask why they want to work with this institution,” Thompson said. “If we have students here (at public comment) saying they won’t feel represented… We’ve got students who feel very strongly about the pledge and we have to represent them.”

Opposition also came out during the discussion, such as comments from student senator Alex Hicks, who said that GVSU’s Student Senate was in the minority among other public universities’ student governments for reciting the Pledge of Allegiance at meetings. Even on GVSU’s campus, some governing bodies abstain from reciting it.

Other senators abstained from the matter, with some citing that Student Senate’s efforts were best focused on other projects. Senators like Richard DeBerry expressed concern that attention is not being given to other projects the body is working on, but is being wasted on discussing the pledge.

Student Senate Vice President of Public Relations Ryan Fritz noted that GVSU’s Student Senate is not affiliated with any of its other governing bodies, such as University Academic Senate or the Board of Trustees. He also referenced the body’s official statement, posted on Facebook Nov. 17, which outlined Student Senate’s position and goals on voting to remove the pledge from its agenda.

“Although we do not always agree, we strive to work together to make Grand Valley State University a better place for all,” the statement read. “This decision was made to better align ourselves with other governing bodies, where stating the Pledge of Allegiance is not common practice.”