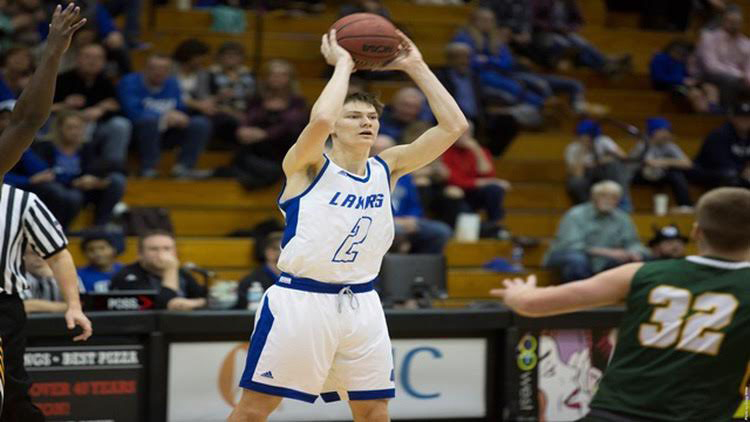 It was looking like the GVSU men’s basketball team would be handed their first loss of the season last Thursday against Truman State, as with 1:48 remaining, down 73-72, senior Jeremiah Ferguson missed a contested layup before senior Ben Lubitz missed the put-back. If the Bulldogs had gotten the rebound with all their momentum, they could have started shooting free throws to ice the game.

The Bulldogs were denied that chance, however, as junior Jake Van Tubbergen used every inch of his 6’7″ frame to rise above a few Truman State defenders to gather a rebound and put in a right-handed layup, giving GVSU a 74-73 advantage. The Lakers did not trail the remainder of the game.

That clutch layup from Van Tubbergen was far from his only impact on the game, as he put up a career-high 32 points to go along with eight rebounds to help lead GVSU to victory. In his third season donning the Laker Blue, Van Tubbergen has never felt more confident when the ball leaves his fingertips.

“These guys (on my team) do a great job of getting me in the right spots,” Van Tubbergen said. “They do a good job of having confidence in me when I shoot it. There’s been a lot of time put in the gym for that.”

While the Lakers were worried about covering Truman State’s star player Brodric Thomas, they were able to contain him when it mattered most. While the senior did pour in 23 points, he was held without a made field goal in the final four minutes of the contest.

“I tried to get everybody to focus on where he was at,”  said GVSU coach Ric Wesley. “He’s a handful for any one guy, and he made some threes. We just tried to surround him whenever we could, and in the last few minutes, he wasn’t sure where to pick his spots in our zone.”

Even though he sat on the bench for a lot of the game while dealing with foul trouble, Van Tubbergen spoke highly of his front court teammate in Christian Negron, who put up 11 points and seven rebounds, with a few of those coming in the waning moments of the ball game.

“Christian is a big dude and he is awesome on the defensive glass,” Van Tubbergen said. “We always talk about defensive finishes and he’s always been the best on our team with that. He somehow manages to get every rebound. You think he’s not going to get it and then he just reaches up and grabs it out of nowhere.”

Negron is one of 11 Laker basketball players who wasn’t on the roster last season. While it usually takes guys who haven’t played together much a long time to get used to one another, Wesley has loved how fast this squad has jelled.

“You always want more, and we played well at times but we made some questionable decisions offensively,” Wesley said. “You got to let the game find yourself, but I’m happy to be where we’re at, but it’s easy to form good chemistry when you keep winning.”

The GVSU men’s basketball team will look to keep winning this week as they travel to Cedarville, Ohio, for the Don Callan classic. They face host-school Cedarville University Friday, Nov. 22, at 7:45 p.m. before tipping off the following day with Ohio Dominican at 3 p.m.