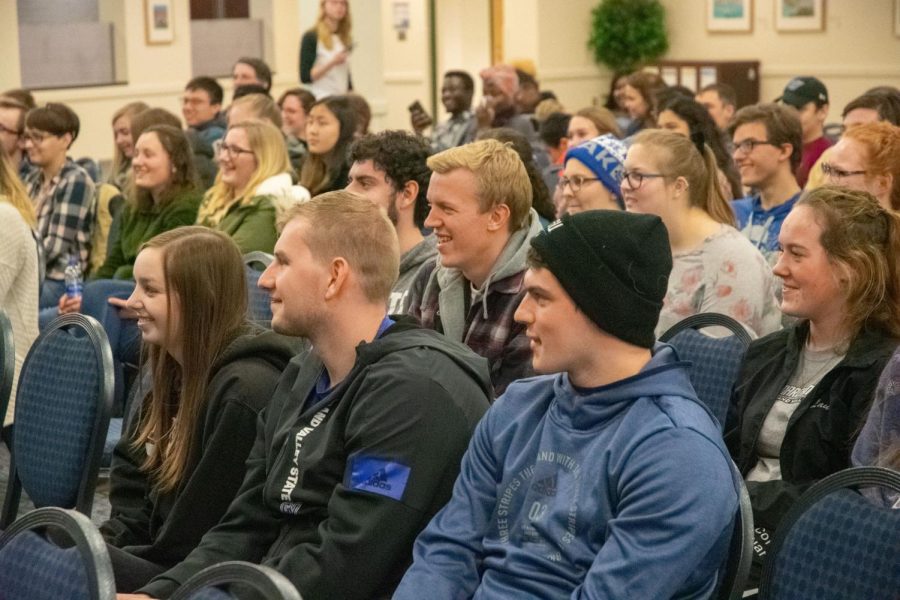 On Friday, Nov. 15, the students of Grand Valley State University and the Campus Activities Board (CAB) welcomed Vincent Bryant and Sohrab Forouzesh, two comedians who were 2018 finalists in NBC’s program, StandUp NBC. The free event took place in the Grand River Room in the Kirkhof Center at 8 p.m. and was a night filled with fun times and finger foods.

Both comedians came from humble beginnings, Forouzesh with a single, immigrant mother and Bryant growing up in poverty. But, the two found their way into the comedy world through their continuous love to make others laugh and StandUp NBC.

“I’ve been a comedian all my life,” Bryant said. “It was a coping mechanism at first, you try to make friends with it. Then, you realize, that’s your way in. So I was like, ‘How can I get paid to do this?’”

StandUp NBC, formerly known as NBC’s STANDUP for DIVERSITY, is a program created by NBC in 2003 to search the nation for stand-up comedians of diverse backgrounds. This allows comedians from across the United States to showcase themselves for opportunities at NBCUniversal and throughout the comedy industry.

“My experience was StandUp NBC was great, we had a good time,” Bryant said. “A lot of times it’s comedians’ first introduction to people in the industry. So, people that could potentially change your life see you perform and envision what they need from you. It’s just a good network.”

Forouzesh agrees and feels that this program was the reason his feet hit the ground running into the world of comedy.

“(StandUp NBC) were great,” Forouzesh said. “They gave me a lot of opportunities, introduced me to a lot of people, got my foot in the door. I would say if it wasn’t for them I probably wouldn’t be able to do it full time. I would probably still be working a day job. It helped me find representation and start getting into colleges to perform and I eventually got a writing credit; which not only let me make enough money to where I could live off of it, but got me a first credit.”

CAB Director of Comedy Jennastasia Chapa found the two comedians in February through the National Association for Campus Activities (NACA) and decided to book them right away, scheduling some laughs in as the semester is in its final stretch.

“I am in charge of coming up with and coordinating a few comedy acts a semester and I thought the GV population would enjoy comedians from NBC and free food,” Chapa said. “We’re all at the point in the semester where we need a break and some time to just laugh.”

Free food was not the only thing that the students received. Prior to the performances, students were given time to brainstorm their best jokes, as CAB set up a friendly competition between the audience. Anyone was able to come up to the stage to tell their funniest joke, being judged by the comedians themselves. Following this, the best three jokesters were given a small prize from CAB to congratulate their wittiness.

Following this, Forouzesh performed, and then Bryant. The two packed the evening to the brim with smiles and people, as both comedians were very impressed by the large turnout.

“You guys were definitely the biggest group,” Forouzesh said. “You guys filled the seats. You guys were fun, but you weren’t too easy, so we still had to work for it. So, I’m definitely going to walk away from this feeling a little better about myself in stand-up. Students are always my favorite group to perform in front of because a lot of times a lot of you guys just haven’t been to a comedy show.”

Bryant agrees, and hopes that through doing what he loves students were able to take away some laughs to spread to those around them.

“This show was actually full so that’s a good thing,” Bryant said. “Sometimes we only get like five people at college shows. I enjoy making people happy. Just letting them know my perspective on the world is pretty sweet, I like doing it.”

The night concluded with the finishing off of snacks and socializing well into the night, where students were given the opportunity to speak to each comedian one-on-one, exchanging laughs and social media to stay connected.