GV kicks off fifth chapter of its history with presidential inauguration 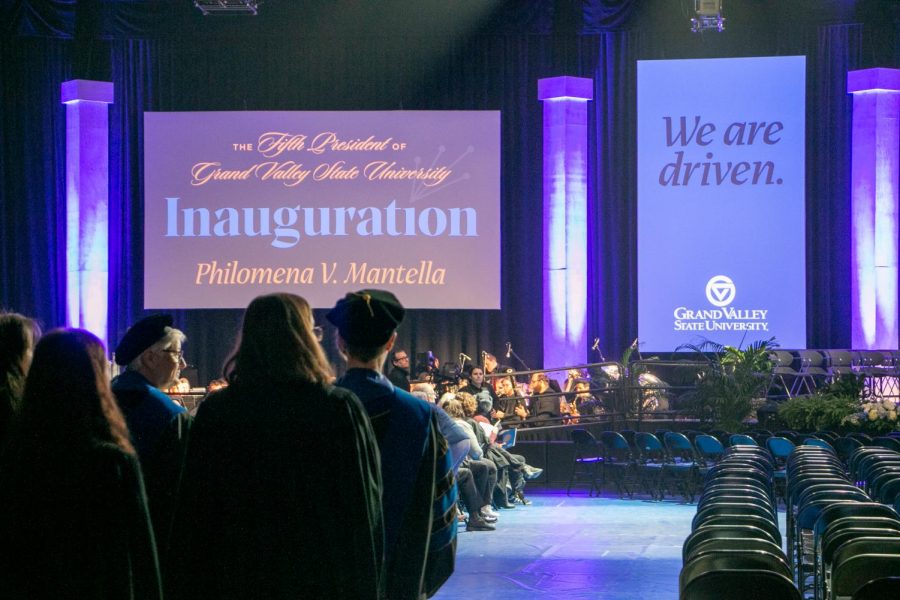 After making the President’s Office in Zumberge Hall her home over the summer, Grand Valley State University President Philomena Mantella made everything official during her inauguration ceremony Friday, Nov. 15. The university hosted a series of events in the days leading up to the ceremony before calling together the campus community to make the presidency official.

At the event, Mantella outlined her vision for the university, announcing two new tools to establish GVSU as a “breakout university”: The Laker Lifetime Learning Account and the establishment of a network for creating and supporting local talent, both through a physical and digital space.

“Grand Valley will build a talent epicenter which will attract companies, nonprofits, entrepreneurs and students — all who are eager to build and nurture explosive ideas and cultivate the talent to make dynamic growth possible,” Mantella said during her address.

The Laker Lifetime Learning Account aims to support Laker graduates in obtaining certifications and badges of all kinds at GVSU. The account will begin in May 2020.

The ceremonial baton was passed to Mantella after Haas addressed the audience, representing himself and the university presidents before him. Using the metaphor of a growing oak tree, Haas said he was proud to be a part of a tree that has finally started to grow branches by which people could use for shade and swings. He also said that Mantella’s inauguration was representative of chapter five in the university’s story, which will heavily involve GVSU as sharing the fruits of its labor with the nation.

“The University’s Board of Trustees has once again appointed the right person with the right qualifications to serve and lead our Grand Valley,” Haas said.

Haas was not the only speaker to approve of Mantella’s presidency. Chair of the Board of Trustees Mary Kramer, University Academic Senate Chair Felix Ngassa, Student Senate Executive President Kelly Dowker and Alumni Association President Timothy Bulson all shared remarks about their excitement for the university’s next president.

The ceremony was preceded by a week’s worth of events, such as an alumni breakfast, an educational summit and student celebrations, where Mantella attempted to meet with as many students as possible.

“I wanted to be sure that every member of our community had an opportunity to celebrate the university’s chapter,” Mantella said. “It’s about becoming president, but it’s really about the next evolution for our university…It’s been a really exciting week.”

Mantella’s efforts to connect with community voices also includes finishing 11 out of 16 planned Grand Huddles in the community, which are sessions where community members can directly share thoughts on the university’s direction with the president. She said that these interactions help make future action thoughtful and grounded, all while making thousands of contacts.

Events this week and other events like the Grand Huddles aim to help Mantella outline the future of the university, which she envisions as involving and expanding fundamental values, such as experiential learning and lifelong learning.

“I think without a doubt the student relationship-based institutional experience where students get to know the community and the faculty get to know the students and what they want their journeys to be (should be) continued and deepened,” Mantella said. “I’m a very big fan of experiential learning and I’m hearing from students across the board that they want more internships, co-ops, paid experiences, abilities to go study abroad and the support to go do that.”

With the week behind her, Mantella said she hopes to take this opportunity to think back on her predecessors and involve as many voices, past and present, as she can in crafting the GVSU’s future.

“We never leave the thread that pulls through every chapter, so let’s not close the book and start anew, but (this inaugural week) does give us the opportunity for reflection,” Mantella said.