“I figured out way back, if God is all powerful, he can not be all good. And if he’s all good, he can not be all powerful.”
Comic books have played a significant role in my upbringing, especially in middle and high school. When kids read Harry Potter, I was reading Ultimate Spiderman, and when most were watching Nickelodeon, I was watching Batman The Animated Series. Taking a closer look now, what pulled me to the “superhero” medium was the part of the psyche that strived for something greater than the conditions accustomed to its environment.

I projected that outwards in stories, realizing characters who I saw as a reflection of myself. On one hand, there was the realization of just how meta the message regarding Joseph Campbell’s The Hero’s Journey was in its representation through narrative, on the other hand was the realization that this sub genre was capable of so much more.

Because of this, the comic book movies that began to surface were lost on me for not meeting these expectations. I went to the theater, I enjoyed them, but that deeper exploration into the nature of mind was nowhere to be found. Just as I had went through a paradigm shift, so did my expectations of the comic book movies that I so desperately wanted to connect to. The Hero’s Journey was certainly present in the films that followed, but it seemed as an afterthought, a trope that I’ve seen a million times before. The part of me that was drawn to this sub genre was missing, but then that dwindling flame was rekindled as I was introduced to the movies by director Zack Snyder.

This deeper, deconstructionist and mythological approach to the comic book genre was the very thing missing for me all those years. So when I heard that Zack Snyder was doing a Superman movie, I was intrigued. The director of the extended cuts of Watchmen, Dawn of the Dead, and 300, etc. was handpicked by Christopher Nolan, the Director of The Dark Knight trilogy, Inception, etc. to carry the torch into the next stage of DC on film. 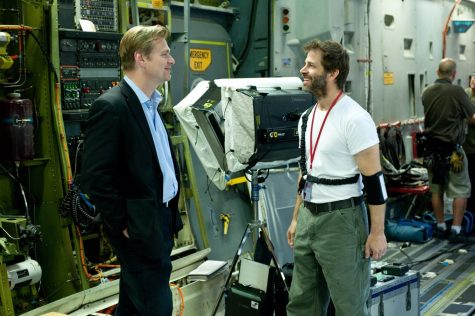 “People hate what they don’t understand.”
Fast forward to 2013, when I watched Man of Steel in theaters, I had thought that Zack Snyder made Superman interesting, and as a result, I was now a fan of this character. But apparently the things that I found thought provoking and emotionally compelling were the very things that others took issue to.

Should Superman be allowed to kill given the circumstance? Do we, as an audience, have the patience to allow a character to develop before they become who we all know them to be? Is it a problem for an artist to put their own stamp on something rather than succumbing to the source material given its popularity? Questions that are still discussed today, which are a testament to the films accomplishments that transcend the conceptual understanding of “popcorn flicks”. 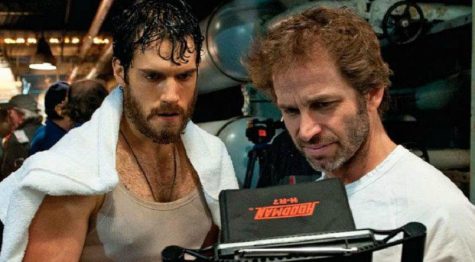 Despite Man of Steel’s mixed reception among critics and bloggers, Zack Snyder grew a significant fan base among audiences for diving into some of the more deconstruction-al complex narratives in his comic book movies. In order to understand how the Hero’s Journey manifests within the psyche, one must also understand how easily it can be broken down. This was heavily emphasized and intentionally prevalent in Zack Snyder’s 2016 Man of Steel sequel, Batman v Superman (BvS), which should only be talked about in regard to the Ultimate Edition cut of the movie because it includes the integral 30 minutes of footage that the studio removed from its theatrical release.

If Man of Steel was an alien invasion Sci-Fi film, then BvS is a political thriller which acts as a commentary on society in its interpretation of bigotry, immigrants, power, narrative, fear as a social construction, the search for meaning, and fake news, all of which fall under Snyder’s distinct vision.  Batman v Superman is not a feel good movie, it’s not meant to be escapism, and that’s the point. Our heroes are damaged like us, and the movie holds the audience accountable as when the psyche tries to escape into these characters.

Instead, BvS holds a mirror to the self and forces the viewer to reflect. Superman questions his place on earth, Batman has lost his way by becoming the thing he spent his life fighting against. The genius of Zack Snyder and Chris Terrio is in the four subplot structure of BvS that all comes together in one scene, while at the same time the deconstruction of these characters is reconstructed in a scene where one moment between them, in their weakest moments, reminds Batman of his humanity, and Superman is reminded of his place on earth. 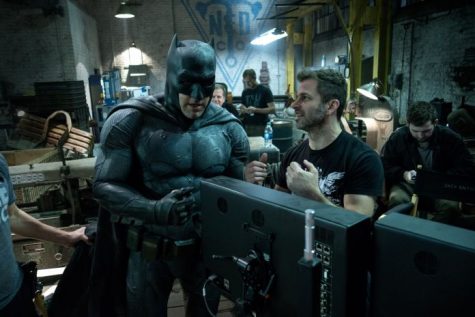 Although the film was by no means a critical failure, WB expected more seeing as how it was the first time Batman and Superman were on screen together, regardless of the fact that WB shot themselves in the foot by altering Zack Snyder’s cut in its theatrical release. On top of this, it seemed to be the case that there was a smear campaign against the movie by bloggers and critics, although this did not stop the ultimate edition cut of the movie in reaching the #1 spot in DVD sales for 5 weeks straight.

Man of Steel and the ultimate edition of BVS are some of my favorite comic book movies, and BvS is up there in the ranks with my favorite movies of all time, a title I don’t throw around lightly. So suffice to say, I was highly anticipating Snyder’s next DC movie in his 5 part movie arc.

But then the unspeakable happened.
“The feeling of powerlessness that turns good men cruel.”
The act of meddling in a director’s vision became easier for Warner Bros when Snyder went through a family tragedy with the loss of his daughter. History would repeat itself again with Snyder’s third DC film, Justice League. 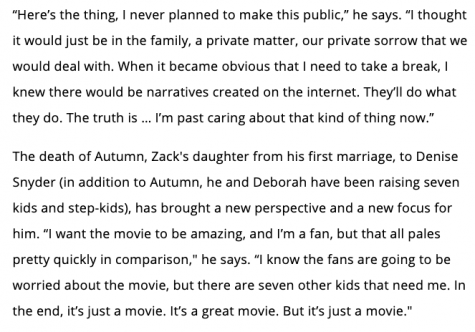 Having to step away from the production in early 2017, Warner Bros stepped in and drastically altered Snyder’s cut of Justice League in its final stages of post-production while at the same time releasing a press statement upon Snyder’s departure, reassuring fans that the film would follow the director’s blueprints.

However, in the year to come, we would learn that this was the farthest thing from the truth. Joss Whedon, director of Marvel’s Avengers, was hired, and Junkie XL was replaced by Danny Elfman, even though his score for the film was already complete upon his removal, to give the movie a more family friendly tone in hopes to bank on the Marvel formula. This resulted in a lot of the cast and crew being cut from the film whose work was left on the drawing board table.

Not only was a majority of the film reshot to adhere to the tone that the studio thought would be most financially successful, but it was also cut down from its 214 minute run time, later confirmed by Snyder, to 120 minutes. Also, because of Henry Cavill’s contract with Paramount Pictures, he was unable to shave his fashionable mustache which was needed for his role in Mission Impossible, so WB studios were left with no choice but to spend $25 million dollars to CGI the mustache out if they were to do reshoots. The end product is as disastrous as it sounds. 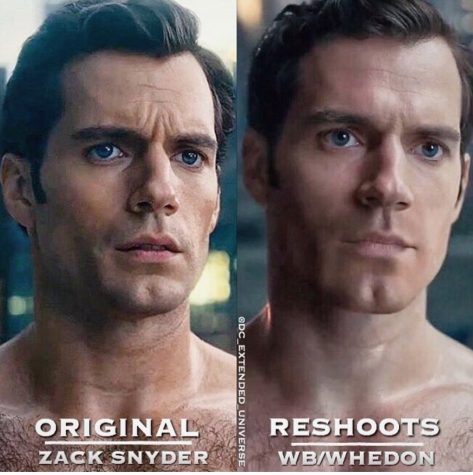 “Today is a day for Truth.”
Words can’t express my disappointment having seen Justice League in theaters for the first time.  Even though I was nervous, seeing as how there were so many changes being made after Snyder’s departure, I still held optimism. However, after the first 10 minutes, it was clear that this was not a Zack Snyder movie. The final product is a Frankenstein adaptation of what the director had intended, worst being that Snyder’s name was still attached to the credits as the movie’s director. 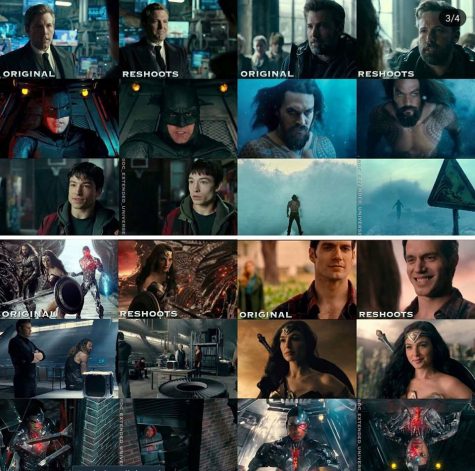 The studio executives responsible for Justice League have since been replaced and/or moved to different positions, and evidence suggests that Snyder, in the past two years since the release of “Joss”tice League (the unofficial name), has been working on his original cut, which has been deemed the name “Snyder Cut”.

The Snyder cut is not just an extended edition of what we were subjected to in theaters, it’s an entirely different movie. Joss Whedon cut out around 90 minutes and reshot a large portion of what was remaining with reports suggesting that Whedon had somewhere around 80 pages of new material to work with.

“It was a completely different team. The movie that was in cinemas was 10 percent of what we shot. Everything else is a reshoot.”

“Men are still good. We can do better.”
Nov. 17, 2019 was the two year anniversary of Justice League, and it was at this time that the fans would make WB hear them. The hashtag #ReleaseTheSnyderCut became the No. 1 trending topic worldwide on Twitter thanks to the movement’s coordination with the director himself in their attempt to show WB that there is a high demand for this cut of the movie.

The rumor is that WB was paying extra close attention to Twitter this past weekend in order to quantify those numbers. The movement’s original goal was to hit 214K tweets using the #ReleaseTheSnyderCut hashtag to symbolize the length of Snyder’s original cut. This goal was met fairly quickly, and from that point, the sky was the limit. 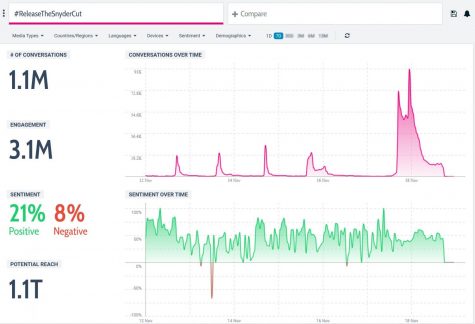 The hashtag reached over 1 million tweets, over 3 million engagements with a potential reach of around 1 trillion. #ReleaseTheSnyderCut was the most talked about news on Twitter and media sites, even being picked up by national television, and it’s all because of the passionate fanbase that are so invested in Zack Snyder’s DC universe, and the compassion for a man who not only lost everything, but then had his art taken out from under him. 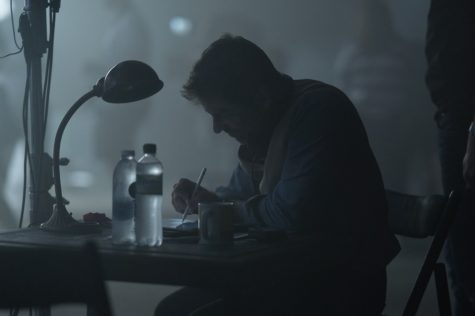 The movement has also raised over $150K to the American Foundation for Suicide Prevention.

This will only bring more awareness to the wrongs done to Zack, the cast and crew, and from that point people can make up their own minds about what artistic integrity means to them, and how important it is to hold on to in this capitalistic age of formulaic movies and corporate greed. The fact that we live within the ideal of a Democracy is why this rhetoric is necessary and impactful in the hopes of making a difference, especially in an age where big data is as important as it is in decision making.

Debate continues on whether or not there even is a cut among media sites and bloggers, despite the constant confirmation from the director, actors and cast and crew that there is one, and that it is done. Warner Bros has remained tight lipped for the past two years and hasn’t confirmed nor denied the existence of an alternate cut.

In the ultimate edition of BVS, a morally ambiguous Batman who must once again find the meaning in his mission was far more compelling and relatable than anything I have seen in a CBM. Warner Brothers, you must now find that same meaning within yourselves, and #ReleaseTheSnyderCut.

But will WB release it? Rumor has it that WB still has a trump card in the streaming wars in regard to their new streaming platform, HBO MAX. Since the release of Josstice League, WB has continuously released statements saying that they are a director driven studio, so it’s time for them to put their money where their mouth is.

But if Snyder’s story is something you are interested in, and you are someone who believes in artistic integrity, lend your voice to the movement. 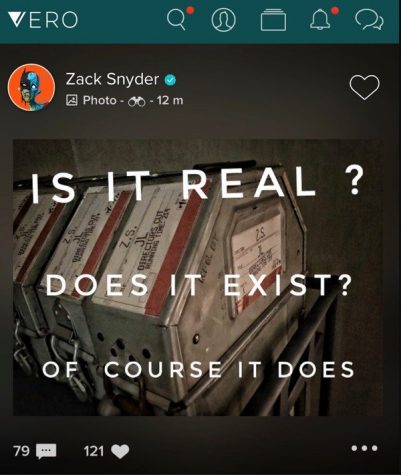