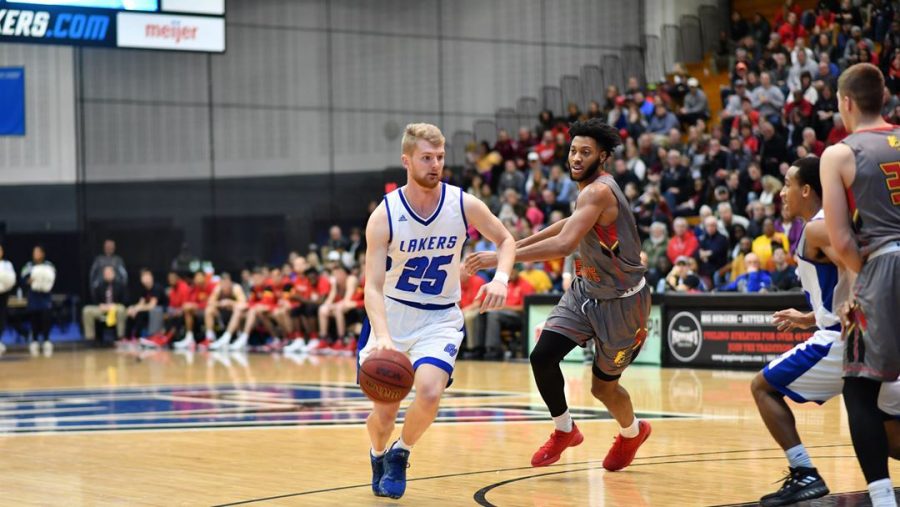 Following a lopsided loss to the University of Indianapolis to start off the week, the Grand Valley State men’s basketball team got their groove back this weekend in Cedarville, Ohio, in the Don Callan Classic. The Lakers beat host school Cedarville, 86-75, before defeating Ohio Dominican, 75-69, to improve to 5-1 on the year.

The former Illinois State Redbird had been having a quiet season prior to Friday’s win, but GVSU coach Ric Wesley was happy to see Gassman find his footing in the offense.

Gassman wasn’t the only transfer to light up the scoreboard for the Lakers, as senior Jayden Hodgson contributed a lot off the bench. The former Bradley Brave hit five of his seven three-point attempts.

The Gosford, Australia, native has only appeared in four of GVSU’s six games this year since he’s been battling an injury.

“Jayden came back and had a strong performance,” Wesley said. “He helps us in a number of different categories: he’s a good shooter, a good passer and thinks the game well. He’s still not 100 percent, but having him certainly gives us another good player to have on the floor.”

After Friday’s win, GVSU faced off against Ohio Dominican less than 24 hours later, and despite a lot of the guys feeling lethargic, the team never trailed in Saturday’s six-point victory.

While junior Jake Van Tubbergen led all Lakers with 17 points in that win, Wesley highlighted the bench’s performance, as Hodgson and juniors John Slater and Steven Lloyd combined for 18 points, five rebounds and four assists. Bench play is huge when teams are playing back-to-back games, especially for a GVSU team that isn’t fully healthy.

“A lot of our guys were fighting fatigue today, but we were the team that was able to keep it together,” Wesley said. “I feel very fortunate to get the win in that back-and-forth matchup, as it was a gutsy performance for a team that is far from 100 percent health.”

Both Hodgson and starting point guard Jeremiah Ferguson missed time in practice this week to nurse their respective injuries. GVSU is hoping they can get those key contributors healthy sooner than later, but a deep roster has allowed the Lakers to win some games while their seniors nurse back to health.

“We’re cautiously optimistic as we continue to get healthier, which is such a challenge nowadays,” Wesley said. “We’re getting closer and closer (to 100 percent health), but we got to keep moving forward. We’ve got some tough competition ahead, but it’s certainly easier to stay focused when you’re winning some games.”

GVSU will look to earn their sixth win of the season this weekend, as they head back home to the Allendale Fieldhouse Arena on Saturday, Nov. 30 to take on the Indiana Tech Warriors. That game is set to tip off at 2 p.m.