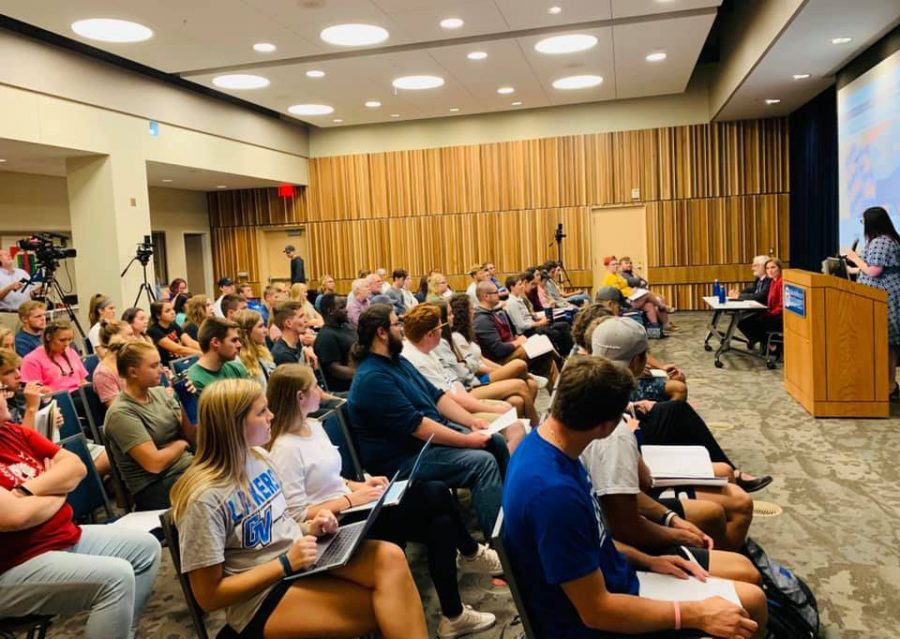 With everything happening in the media, it is hard to distinguish what forms of speech can be protected under the First Amendment. Though it protects speech, it does not protect the speaker from the consequences of their words.

The line is thin and blurred; many people argue over what they should or should not be able to say in public, private or online. However, while some people argue to learn or for the sake of arguing, other people are using those conversations to fight for their safety and, in extreme cases, their lives.

Democracy 101: A Series of Critical Conversations is a weekly series of discussions hosted by Grand Valley State University’s Community Service Learning Center (CSLC) to educate its students about the world that we live in. On Wednesday, Nov. 20, the Center hosted their 10th event of the year.

This event, called Free Speech And Inclusion: Holding The Tension On Campus, tackled the issue of the line between speech protected by the First Amendment and hate speech.

The hour-long discussion was divided into three parts: short speeches from a variety of panelists, table discussions and a Q&A session with the panelists and discussion leader.

The panelists represented different viewpoints and departments within the campus. Each gave a short speech outlining their stances on the issue at hand, each of which lasted from 3-7 minutes.

Anne Jbara, from the Legal, Compliance & Risk Management Division, kicked off the conversation with the legal implications of the argument, and how it related to GVSU.

Some places on campus are considered to be limited public forums, which are places for people to speak and share their message. Though GVSU is able to designate times, places and manner,  the university cannot dictate what people can say or discriminate based on viewpoint.

“We can’t make any decisions as to whether or not to allow someone to speak based on what they are going to say,” Jbara explained.

Political science professor Darren Walhof followed Jbara with a short speech about the special role that universities play when it comes to democracy. He focused on what he considered to be the most distinctive two features.

The first, Walhof said, is that people of all backgrounds were able to come together in one space. Instead of secluding themselves into a bubble of only similarly-minded people, students are more integrated and see various viewpoints and ideas.

“The second distinctive feature of universities is that free exchange of ideas is precisely what we’re all about,” Walhof said.

Free speech is encouraged, and even unpopular opinions are free to be shared. The exchange of ideas opens up discussion about all kinds of opinions and thoughts. He strongly believes that people should fearlessly be able to discover and share their ideas, however unpopular.

The next speaker was the Director of Social Justice Education Relando Thompkins-Jones. His speech focused on education, challenging views and what people have at stake while arguing.

“What I like to try to keep in mind – using education as a way to lessen the distance between who we say we are as a community and how that’s actually felt by all the people in the community,” Thompkins-Jones said.

He discussed how we need to understand our history and face interdependent systems of oppression. Among these systems are white supremacy, heterosexism, cissexism, classism and ableism. All these systems reinforce each other.

“For some of us, depending on how we’re located, our experience, our relationship with power, privilege and oppression, what we’re talking about could be a learning experience while for others it could be their very lives that are on the line,” Thompkins-Jones said.

Some people don’t realize that the things they are arguing about are more than an idea. For some people, politics don’t disappear when they are done discussing it. Their lives are ceaselessly impacted by things others only argue about.

D. Hollowell, the fourth speaker and an educator on social justice, further pounded this point home. The speech they presented was the longest on the panel, but seemed to captivated the audience.

“One of the main things I’d like to touch on is that we don’t ask people to get comfortable with their dehumanization,” Hollowell said. “And when I’m talking about people, I’m talking about specifically marginalized populations.”

They pointed out that hate crimes are on the rise, specifically against transgender and Latinx people. People heard negative things about people in these, and other, groups and decide to take action into their own hands, typically leading to violence.

“When we grant people who are fascists, folks who are literal Nazis, platforms, we not only allow them for them to grow their fanbase, right? But we allow for the university to then be abused as an agent of radicalization,” Hollowell said.

If GVSU were to allow these types of people, it puts some of their students at risk, Hollowell said. The university would become responsible for whatever reaction comes from these speakers having a platform.

“When you fundamentally don’t see someone as your equal, you ultimately see them as inferior to you or deserving of a lower quality of life,” Hollowell said. “That is not civility. That is violence.”

The final speaker was Lisa Burhamis from the College of Education. Her short speech touched on some important rules of dialogue for civil discourse.

These rules include listening to hear, not just waiting for your turn to speak but actually understanding what others are saying; avoiding fighting words; and speaking from lived experiences. No one learns anything in an argument if they refuse to understand, Burhamis said.

Democracy 101 is full of important conversations that need to be held. They’ve completed all of the event for this semester, but a selection of videos are on their website. More events are scheduled for January 2020.