Stepping towards awareness with red shoes 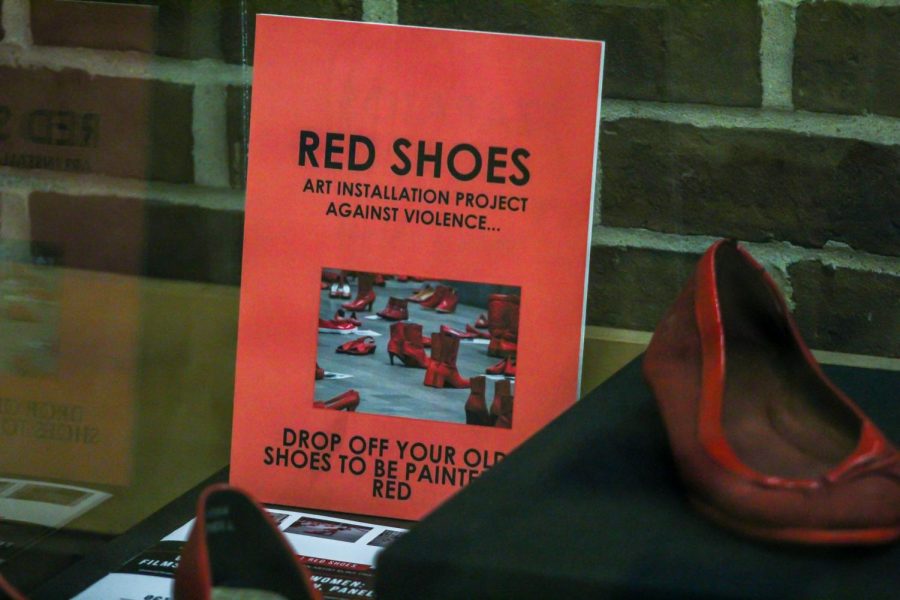 “Zapatos Rojos” is an art installation being displayed at the Kirkhof Center from Nov. 1-Feb. 28. This art installation serves to represent the cause and spread awareness for the fight opposing violence against women.

This installation was chosen by the Modern Languages and Literatures department and was originally created by award-winning artist Elina Chauvet in Juárez, Mexico.

When guests pass by it in the lobby, they will notice documentation of a selection of the brightly painted red shoes. Each of the shoes, originally being thirty-three pairs,  represents a missing woman from Chauvet’s community.

This installation was originally organized in 2o17 by Modern Languages and Literatures Professor Zulema Moret. By working with Elina Chauvet and GVSU students, she was able to organize the installation of this project in Grand Rapids. After that, Moret approached the art gallery about exhibiting this project for students to see.

In her city of Juárez, there was an eruption of girls going missing around Chauvet’s community. In 2009, she decided to take a stand against the numerous girls that were going missing or being murdered. She employed a community of people to paint red shoes to represent each of the women who disappeared. Many of these women’s stories were underreported by the press, and local law enforcement was not doing much to eliminate the issue of domestic and gang violence against women.

“We should all be aware that violence against women continues to be a problem worldwide, and it is important to work in solidarity to combat it,” said curator Joel Zwart.

One may ask “why shoes?” Almost all of the victims represented in this installment had one thing in common: they were either out shopping for shoes or worked at a shoe store when they were targeted. Chauvet used shoes in order to connect all the women together and give them representation through art.

“I believe that the installation of red shoes is a powerful representation of those who have been affected by violence towards women,” Zwart said. “I’m hopeful that it will catch the attention of students and remind them of this important issue.”

Chauvet makes it her goal to use the project “Zapatos Rojos” to spread a message to fight violence against women and to raise awareness for those who have disappeared or been murdered. Chauvet states that her goal is to collect more shoes than the number of women murdered since the start of her project in 2009.