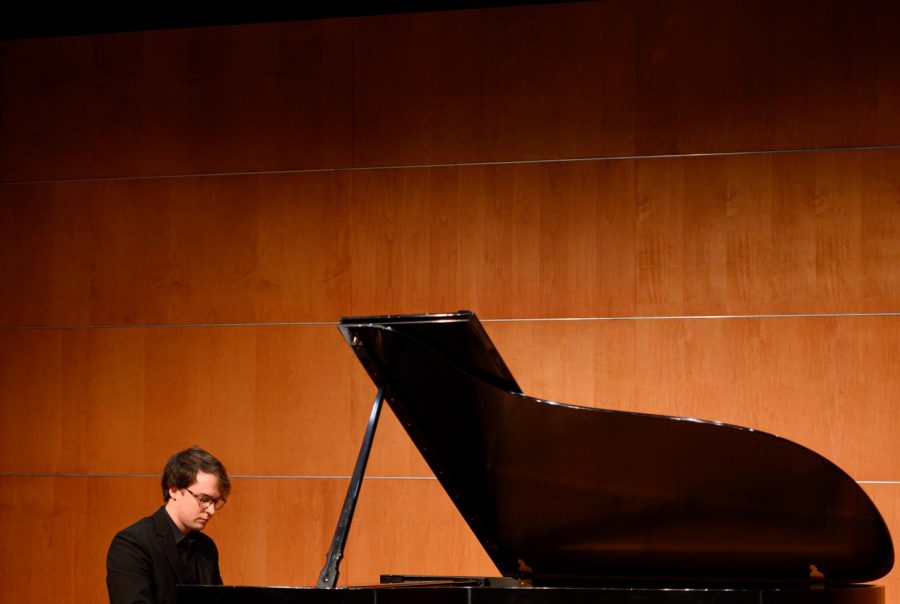 This recital, free for Grand Valley State University Students and the general public, showcased the talent and hard work of Cho’s students as the semester comes to a close. Each student performed one to two pieces that they practiced and perfected over months for their family, friends and classmates.

Dana Van Dyke, one of Cho’s students, was very excited to finally show everyone all of the hard work that they put into their pieces. She believes that the recital was a valuable time for the studio to come together as one.

“We all put a lot of hours into this, especially outside of class doing extra performances in order to get ready for this so we were really excited,” Van Dyke said. “My favorite part was hearing everybody come together with everything they worked on, and then perform it for each other. It’s a very cool thing to do for peers. The recital is very important to bring the studio together, to unite them and encourage each other, to keep striving to work hard.”

However, it is not just the students that do all of the hard work. Courtney Saunders, a member of Cho’s piano studio, said that Cho was of great help to them as they prepared for this recital, bending and twisting her own schedule to fit that of her students.

“Dr. Cho is always so hardworking and honest with us and she’s always willing to go the extra mile,” Saunders said. “She’s so flexible with her schedule, she’s willing to schedule extra lessons with us. As always, she’s just so willing.”

Cho puts in every effort to teach her students and guide them through their pieces. However, she said they always end up teaching her a thing or two as well.

“I love the fact that teaching piano is a constant discovery,” Cho said. “All the students are so different that they give me different challenges. I find that I’m constantly learning about my playing as I learn about their playing and try to help them. I love witnessing how they grow over time. It’s fascinating. Some students develop in ways I never expected. It’s just very satisfying.”

All that Cho does is not just for the love of her students, but for her deep-rooted passion for music.

Cho was born and raised in Seoul, South Korea, and moved to America with her family at the start of her high school career. She completed her university schooling on the East Coast, graduating with a bachelor’s degree in music from The Juilliard School in New York and a master’s degree in music from The Peabody Institute of John Hopkins University. Later she received a doctor of musical arts degree from Juilliard.

Cho’s journey in music began with singing in the elementary school choir and moved to playing the piano at six-years-old.

“I used to sing a lot, that was my first love,” Cho said. “I sang in children’s choir when I was in elementary school and I conducted a choir in middle school and high school. My choir director wanted me to become a singer and I said no because I was afraid of having the hiccups on stage. So that was really the reason I got into the piano.”

This avoidance of hiccups lead Cho down a never-ending road of love for piano and constantly learning new repertoire. She claims to have stuck with it because it was the one thing that she struggled with.

“It was a really big challenge and I think I love the fact that there was always something that challenged me so greatly,” Cho said. “I felt small, I felt humble. Whenever I felt like I conquered a piece, I would go to a new piece and it felt like I had to start from zero. It was always a struggle, but in a way, because I struggled so much, there was a greater satisfaction when something came together. I think that feeling when I was little was what kept me going and challenged me.”

This passion has now taken Cho across the globe, as wherever she goes she is asked to play.

“I practice often and I perform often, too,” Cho said. “I do an annual recital (at GVSU) and it’s really special to me because I get to play for my students and their parents and former students and friends in town. This summer I was in China, Indonesia and Korea performing.”

No matter how far and wide she goes to perform, Cho has found a home at GVSU.

“I’m just really grateful to be here at Grand Valley,” Cho said. “It’s been a wonderful journey the past few years. My students have been really wonderful. I’ve grown a lot I think as a teacher, as a person and as a performer. I just want to be able to create an environment where everybody feels that they are also growing and they’re learning the beauty of being able to express and to play.”

The recital concluded with a reception for family, friends and peers to meet with the students and congratulate them and Cho on a semester of hard work.