Antisemitism on the college campus 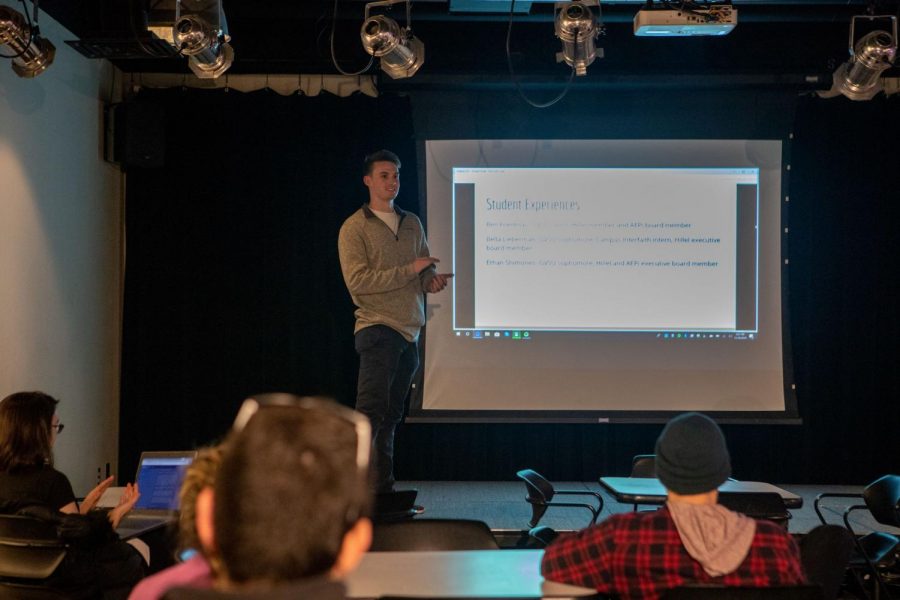 Currently and historically, antisemitism has been a threat to American community and diversity. The term, now referring to hostility or prejudice against the Jewish people, was initially coined by a German named Wilhelm Marr in the late 19th century. Marr inaccurately used the linguistic term “semitic” to define what he saw as a “dangerous and alien” race in his pamphlet “The Victory of Judaism Over Germandom.” His arguments, later used by the Nazi party, have also been seen in our own country – from 20th century anti-immigration laws preventing Jewish migration into the United States to “Unite the Right” protestors in Charlottesville, Virginia chanting “Jews will not replace us” in 2017.

To combat antisemitism and strengthen campus education on the subject, Grand Valley State University student Bella Rosenberg hosted the event “Campus Inclusion: Antisemitism” on Tuesday, November 19. Her presentation, which included discussion of personal experiences with antisemitism from her fellow students Ethan Shimones, Ben Friedman and Bella Lieberman, addressed the history of antisemitism and how communities can fight proactively against it.

“The word ‘Jew’ is a borderline slur – the reason it’s borderline is because it depends on who you’re talking to, but it tends to have negative connotations,” said Rosenberg. “Like from the 1936 attack on a French Jewish political named Leon Blum, where he was dragged from his car while people yelled ‘death to the Jew.’ Or if you’ve ever heard things like ‘dirty Jew,’ stuff like that. So it’s best, at least for non-Jewish people, to say ‘Jewish people’ as opposed to ‘Jews.’”

Many American stereotypes and popular conceptions of Jewish people are based on the “Ashkenazi,” a Jewish diaspora population from Eastern Europe. There are many Jewish diasporas, populations identified by their involuntary mass dispersion from their indigenous homeland and split into different minority ethnic groups, such as the Mizrahi from the Middle East and Central Asia, or the Sephardi who fled Spain and Portugal during the Spanish Inquisition.

“Between 1881 to 1920, about three million ‘Ashkenazi Jews’ immigrated to the United States,” said Rosenberg. “They were treated similarly to the other immigrants in terms of discrimination when it came to employment, education, and social advancement. The Populist Party perpetuated the idea that D.C. and Wall Street were in the hands of international Jewish banking houses, and that the Jews were the center of an international conspiracy to fix the currency/economy to a single gold standard.”

This stereotype of Jewish people as greedy bankers – a characterization dating as far back as the 9th century, when medieval Christians restricted their Jewish subjects to unappealing careers like money lending and tax collecting – is often accompanied by appearance-based tropes, such as droopy, beady eyes and big noses. Rosenberg shared a piece of Nazi propaganda aimed at children saying “the Jewish nose is crooked at its tip – it looks like the number six.” Though it’s been almost a century since the popularization of Der ewige Jude style Nazi propaganda outright depicting Jewish people as subhuman monsters, these stereotypes can still be seen in popular culture. One particularly unsubtle example cited by Rosenberg during her presentation was the Gringotts goblins from Harry Potter – greedy, secretive bankers with beady eyes and crooked noses who “never forget a debt.”

“Most Jewish characters in media tend to be a stereotyped exaggeration, or they’re totally chill with being in an entirely Christian culture,” said Rosenberg. “On one hand you’ve got your Howard Wolowitz from the Big Bang Theory, who’s characterization is based like exclusively off of stereotypes, especially his relationship with his mother.”

The event also covered challenges faced by Jewish members of the Grand Valley community, such as attendance conflicts with important Jewish holidays.

“What I’ve struggled with in terms of taking off the Jewish holidays is that I have to play catch up with my assignments,” said Roseberg. “Like, we’re almost at Thanksgiving and I’m still trying to catch up in some of my classes! But the holidays fell late this year, they fell in October as opposed when they typically occur in September. The ever changing Gregorian dates of the Jewish holidays isn’t something I can help, it’s just something I follow.”

Rosenberg notes that though she has been fortunate with professors understanding why she has to miss class on religious holidays, the larger problem could be solved through changes to school policy.

“Personally, I think that every non-religious-affiliated academic and professional institution should have some sort of interfaith training where everyone can be educated on important holidays and days that students/employees/what-have-you of different religions should be able to take off” said Rosenberg. “It goes beyond being Jewish kids in a Christian area, because there are more religions here – Grand Valley as a whole should be more educated on how to accommodate non-Christian students. Having to constantly explain to my friends, professors, classmates, etc. that I’m not going to be in class on the day an assignment is due because I’m going to be in synagogue praying all day is kind of annoying.”

Rosenberg staged the presentation on behalf of her role as the Campus Inclusion Intern for Hillel, Grand Valley’s chapter of the international foundation for jewish campus life.

“The Campus Inclusion Internship is relatively new,” said Rosenberg. “It was established to forge relationships between Hillel and other minority groups on campus, as well as to educate Grand Valley’s students, faculty and staff on antisemitism – what it is, what’s the history, what it looks like on college campuses, and how to be a good ally. Within Hillel, I’m the person students report antisemitic incidents to. So if someone’s professor wasn’t letting them miss class because of a Jewish holiday and counted them as absent, which is religious discrimination, they would come to me.”

Rosenberg’s research covered so much history that she was unable to fit everything into her presentation, shortening it into a more manageable account of antisemitism that was still too comprehensive for this article to cover in its entirety. But the most important lesson to be learned is not just that antisemitic persecution has occurred throughout history, but that the stereotypes and generational trauma it created still exists in our society today. Fighting against continued antisemitism, such as that exhibited by the Charlottesville protestors or the violent hatred of the 2018 Pittsburgh synagogue shooting, is something that requires the pro-active cooperation of the campus community.