Thunder from Down Under: Senior Jayden Hodgson brings experience, leadership off the bench for GVSU basketball 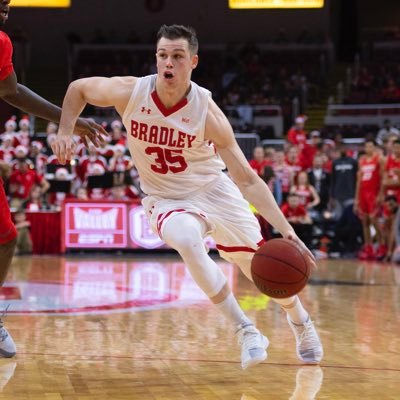 Jayden Hodgson dribbles to the hoop in a game with Bradley University. Courtesy/@jaydenhodgson35 on Twitter

Thunder from Down Under: Senior Jayden Hodgson brings experience, leadership off the bench for GVSU basketball

Perhaps the most intriguing of those transfers is senior Jayden Hodgson, a Gosford, Australia, native who previously signed a developmental contract with the Sydney Kings on the Australian National Basketball League and played for the Australia U17 team, where he won a silver medal in the FIBA U17 World Championships in Dubai in 2014.

Hodgson fell in love with basketball in first grade at age 6, and idoled a few future NBA Hall-of-Famers who could score the ball at will.

“When I was getting serious was in 2010, when Kobe (Bryant) won his fifth ring back-to-back,” Hodgson said. “The more I started to learn about the players, Steve Nash was another guy I loved growing up. And these days, I love to watch guys like Steph Curry, Kyrie Irving and all those type of household names.”

Shortly after Hodgson came state side, he started playing basketball at the University of Bradley, where he appeared in 86 games and started in 29, the last which being in an opening round loss in the 2019 DI NCAA tournament to Michigan State.

“I had an assistant coach back home who used to coach at St. Mary’s, and he had a friend who coached at Bradley,” Hodgson said. “I was in a grey area, and I didn’t know what I wanted to do with a young team. The academics there were really prestigious, the coaches were great, and the team really felt like a family.”

When the Australian decided it was time for a change in scenery and entered the transfer portal, he put Grand Valley State at the top of his list and fell in love with the school on his very first visit.

“I heard about them from a coach at Bradley, and they were my first interest,” Hodgson said. “I developed a great relationship with (GVSU assistant) coach Johnson, and when I first came on a visit, I loved the facilities, and the team they had coming back from winning the GLIAC title was what really drew me here.”

While he was sidelined for two games with a sprained ankle, Hodgson has been doing his best impression of Kobe Bryant in the four games he has appeared in for GVSU, averaging 8.3 points while shooting 50 percent from three, including posting a season-high 15 points in last Friday’s win against Cedarville.

Even though he is currently in the sixth man role as the first guy off the bench, GVSU head coach Ric Wesley views him as much more than a scorer, as he impacts the game in many ways whenever he steps on the floor.

“His talent is his versatility, he does a little bit of everything,” Wesley said. “He gets some stats in every category, so it wouldn’t surprise me if he lead us in scoring or assists. What he does doesn’t always show up on the stat sheet, his calm presence and processing of the game is very good.”

That ability to stay calm was something Hodgson had to get used to here, since the student population at GVSU is more than five times as high as Bradley’s. But through the first couple months, it appears that Hodgson has grown a soft spot for Allendale.

“School here is a lot bigger and took some getting used, but I’ve liked it,” Hodgson said. “The basketball here has been very good and the guys here have welcomed me with open arms.”

Wesley feels that Hodgson’s work ethic is infectious, and he offers a lot of fun stories with his experience from the other side of the world.

“He’s a great guy who’s upbeat and brings a lot of life to practice,” Wesley said. “He’s from another part of the world, so he has some life experiences that make him a joy to be around. He’s a very easy guy to talk to.”

Hodgson has some lofty goals for the team this season, as he hopes that GVSU can repeat as GLIAC champions.

“The team goal is to win as many games as we can and make the NCAA tournament,” Hodgson said. “I hope to play as best as I can and do what I can to help the team.”