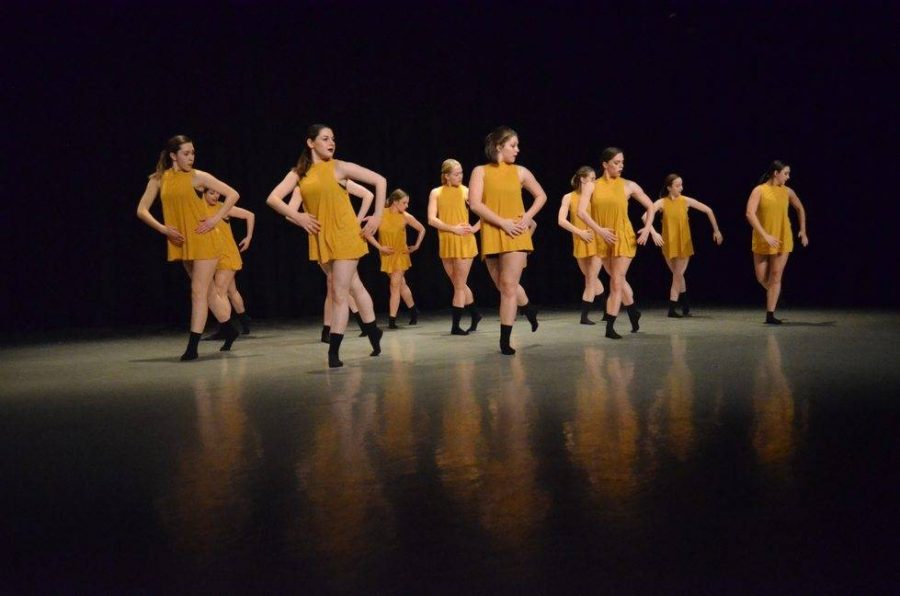 On Dec. 6 and 7 at 7 p.m., the five dance majors in the senior capstone class at Grand Valley State University will be holding their own end-of-semester dance concert on Dec. 7, followed by a reception.

The event is to take place in the Dance Studio Theatre, room 1600, of the Haas Center for Performing Arts, and will include a group and solo performance by each of the students. It is free to attend, but donations are accepted.

The beginnings of preparation for the concert took place within the first week of the semester, when students held auditions to select those who would be involved in their group performances. According to senior Madline DuHadway, the invitation was offered to anyone, and even some familiar faces tend to show up.

“Anyone from the campus could audition for our show. But, normally it’s more people that are in the dance program or people who have even graduated out of the program that still come and audition,” DuHadway said.

Once the groups were formed and the seniors were content with the lineup, practices started the second week of the semester and continued from then on at least once a week and for two hours every week.

However, this is not just another performance. Assistant Professor of Dance Carrie Brueck Morris said that the students have full responsibility to put together every single aspect of the concert.

“They are responsible for really putting on the entire show. Starting with auditions, they create all of the choreography and hold auditions for the performers,” Brueck Morris said. “They are in charge of hiring a lighting designer, of getting together their own costumes, the programs, the posters, really everything from beginning to end.”

DuHadway loves the performance for this reason, and cannot wait to show off all of the hard work they have been putting into this event.

“My favorite part is that we got to make the whole show ourselves. It’s really special because we’ve done all of it. We get to choose who is in our own pieces and we get to make our own work for the very first time,” DuHadway said. “I hope anyone and everyone who can come comes so that we can have an opportunity to show what we’ve been working on and how we’ve grown since our freshman year.”

As the event approaches, Brueck Morris emphasizes the importance of the concert, as everything that the students have learned throughout their time at GVSU translates into this show.

DuHadway is excited for the thrill of the concert and is soaking up the last bit of her time with her peers.

“The thing that I’m looking forward to most is just having the experience with my fellow classmates and also with my cast who has been working so hard all semester to bring what I want to life,” Duhadway said.

The moment when everything the students envisioned is brought to life is the one that Brueck Morris values most, as she states that it brings the entire department together as one.

“It’s something that, even starting their freshman year, dance majors are already thinking about. So, I think it’s really special for them,” Brueck Morris said. “It’s kind of this big culminating moment for them when it all comes together and they’re with their friends and their families are here and alums come back. It’s one of those moments where our department really feels like a family.”