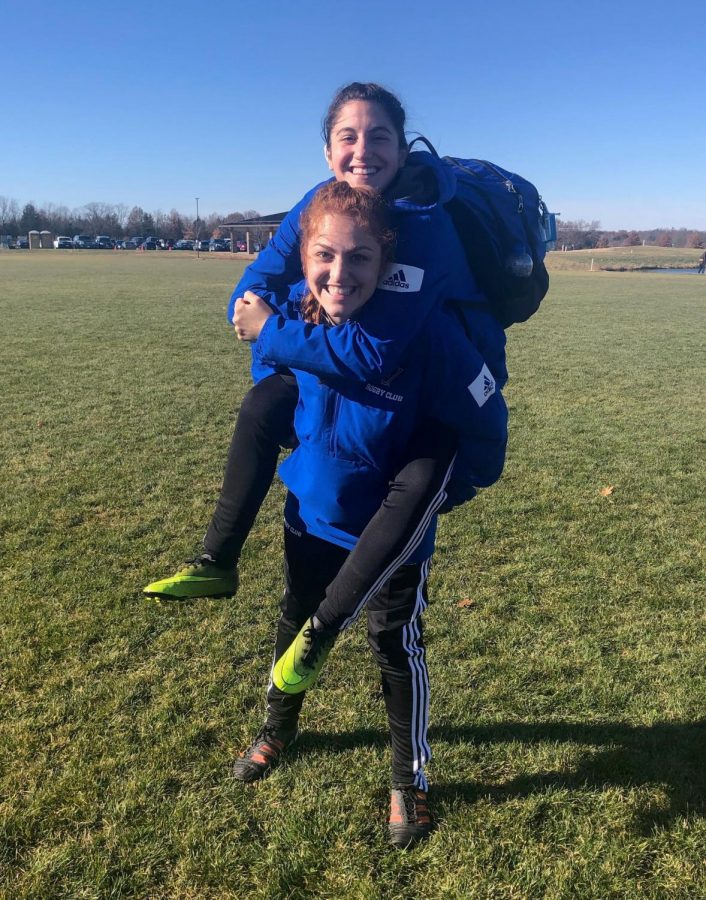 Lex Tsakiris (above) and Alexa Andary (below). Courtesy / Kenzie Cain.

For most clubs at Grand Valley State University, an event where everyone gets a bruise, members tackle students from another school and someone ends up with cleat marks on their face would probably be cause for concern. But for the Women’s Rugby Club, it’s just another match — a match they would probably win, given their incredible track record this season. This year, the team not only made it to the National Tournament, but to the Elite Eight before finally taking their first loss against Winona State University, the 2017 National Champions..

“I think that our team learned a lot from playing in Nationals this year,” said junior Lex Tsakiris. “Competing with extremely good teams was a learning opportunity for us. We were able to challenge ourselves and change the pace of the game. I believe that our team will make it farther next year because the tournament was an eye-opening experience. We were able to see our strengths and weaknesses and improve on different aspects of our game.”

This year’s long list of victories came with no little difficulty, as the team had to learn and grow over the course of the season to maintain their winning streak.

“At our first game of the season we only had 17 women,” said sophomore Kenzie Cain. “To start with such low numbers and be able to build to a roster of 25 was something I only hoped we would do. As the season progressed we gained more momentum, winning games and powering forward. When we beat our rival, Bowling Green State University, we realized there wasn’t much we couldn’t accomplish. Going into the sweet 16 undefeated and playing UW-Oshkosh — who kept us out of playoffs last year — we were ready to play. Advancing to the Elite Eight was more than myself and my teammates could have hoped for.”

The familial atmosphere developed by the team played a large part in their success, both on and off the field.

“Students who are thinking of joining rugby should know that the team is here to help with their success — you can go to anyone for homework help, or for any other problem,” said freshman El Dettling. “Club rugby is a community sport, so we put school first for our athletes. Having a couple practices a week means that students should schedule homework time in advance. It’s very do-able.”

Rugby has a reputation as a dangerous sport, especially when players are visually compared to those of the more popular full-contact sport of football who wear all sorts of helmets and padding.

“Rugby is a rough sport, but I would argue the rules makes it safer than a sport with pads and helmets,” said club president and senior Alexa Andary. “We have to have integrity on the field, meaning we are aware of both our bodies and others, so we can’t just throw ourselves at players, go in head first, or swipe and body slam just to get people down. When we learn how to play, we learn safe tackles as well as how to get tackled safely. A majority of our players came from other sports like soccer and basketball with no experience in full contact sports.”

Full contact sports are certainly a rarity for women athletes. Even football, arguably our nation’s most popular sport, has remarkably few women’s teams. Rugby is an exception to the rule.

“What is so amazing about women’s rugby in particular is that we get to show women how to be powerful and confident with their bodies,” Andary said. “Rugby is also the only contact sport that has no rule differences from the male version, so having a sport based on equality and integrity makes it one hell of a sport to love.”