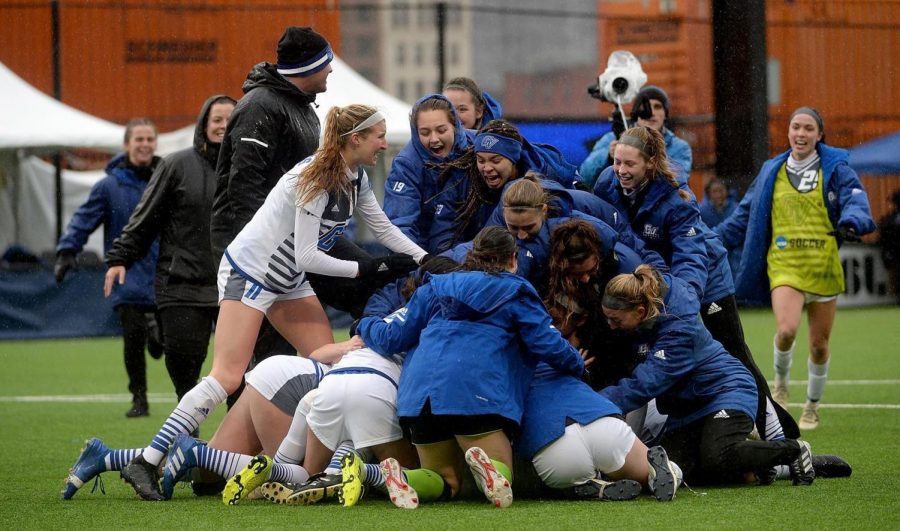 “The feeling was just incredible. To be surrounded by my best friends and celebrate what we’ve worked so hard for all year,” Grand Valley State University sophomore midfielder Gianna Parlove said after scoring the national championship clinching goal in double overtime. “We showed so much resiliency today and I couldn’t be happier.”

In a season defined by overpowering offensive play and a campaign to avenge their loss in last year’s national championship, only one word could define how GVSU women’s soccer won their record sixth title: Grit.

On a cloudy, rain-soaked Saturday afternoon in Pittsburgh, Pennsylvania, GVSU Soccer faced their toughest test of the year by far against a Western Washington University squad that came into the game with a 23-2 record and a 5-game shutout streak.

Both teams were mirror images of each other coming into the game, grounded in stifling defense that allows for each of them to create numerous offensive opportunities at the other end of the field.

In the end, GVSU prevailed 1-0 on Parlove’s golden goal that came from a well-executed free kick setup at the feet of sophomore defender Abby Willerer.

The best scoring opportunity in regulation for GVSU came in the 17th minute after the nation’s leading scorer, Ava Cook, bullied her way into the box to draw a penalty that would set GVSU up for the PK. Senior midfielder and national player of the year Riko Sagara lined up for the penalty kick, but pushed a sizzling low liner just wide of the left post to leave the score knotted at 0-0.

Coming out of the locker room for the second half, Western Washington flipped the script on GVSU, who usually has been the team all year long to make a statement to open the second half.

The Vikings routinely beat the Lakers to every 50-50 ball and used their midfield to dominate possession on GVSU’s half of the field over the final 45 minutes of regulation.

That constant possession allowed Western Washington to consistently volley shots toward GVSU’s goal, but goalkeeper Jessica Radice was up to the challenge.

Radice made save after save over the course of the game, tallying 8 total by the final whistle. Two of Radice’s saves were full extension dives to preserve a scoreless tie, one in the 50th minute and another with 4 seconds left in overtime.

“We were not going to let (what happened last year) happen again,” Radice said after the match. “I knew my back line had every rebound, so I felt comfortable to just go for the ball and know we would have it covered.”

The Vikings ended up with 14 shots and 11 corners in the second half, but came away without putting a goal on the board. Comparatively, GVSU only managed 1 shot and 2 corners over the entire second half.

Not only were the Lakers outplayed in the second half, but they weathered their fair share of controversy as well.

Nearly 15 minutes into the second half with the Vikings bearing down on the GVSU net, 3-time 1st-team all-american center back and 2-time GLIAC conference defender of the year Cece Steinwascher went down with a left leg injury that held her out for the rest of the game.

With GVSU’s vocal leader and best defender on the backline out of the game, GVSU needed someone to step up and play big minutes in Steinwascher’s place. Enter Willerer and junior Olivia Trombley.

Trombley, who recently won the Elite 90 award for having the highest cumulative GPA of any student-athlete to compete in the NCAA’s 90 championships, came in and provided that spark in combination with Willerer on the backline to help preserve the shutout in Steinwascher’s absence.

“If you look at the box score, the better team lost today,” GVSU head coach Jeff Hosler said after the game. “But the fight we showed, the way our defense stepped up – particularly Jess – and then Abby (Willerer) and Liv (Olivia Trombley) when Cec (Cecilia Steinwascher) went down. That was incredible. It’s hard to put into words how I feel right now.”

GVSU used the five-minute break before the start of OT to catch their breath and draw up a plan to go on attack in overtime.

They did just that.

GVSU started to flip the script back on the Vikings, as the Lakers began to find effective passing combinations that lead to a handful of opportunities to attack the Western Washington goal over the first 7 minutes of overtime.

Western Washington did not yield though, as they gained possession of the ball for the last 2.5 minutes of the first overtime. Their final attack of the period nearly ended the game, as the Vikings unleashed a shot far post that was denied off of a diving save by Radice and then alertly cleared by junior defender Syd O’Donnell, allowing for time to expire.

Opening up the second overtime, Western Washington immediately gained possession and streaked toward GVSU’s goal on a 2-v-2 attack, but ended the possession with a shot that harmlessly skidded far right of the goal.

After consistently regaining possession of the ball near the halfway point of overtime number two, GVSU found it’s opportunity to score six minutes in.

Advancing up the center, Cook was able to use superb body positioning to draw a foul on a through ball slotted for her at midfield, which allowed GVSU the opportunity to set up in front of the Viking’s net for a free kick.

Parlove shot a line drive under the extended left arm of the Vikings goalkeeper and found the back of the net. Elation set in, and the celebration was on.

Now they need a second hand to display all of their rings, and revenge season is complete.