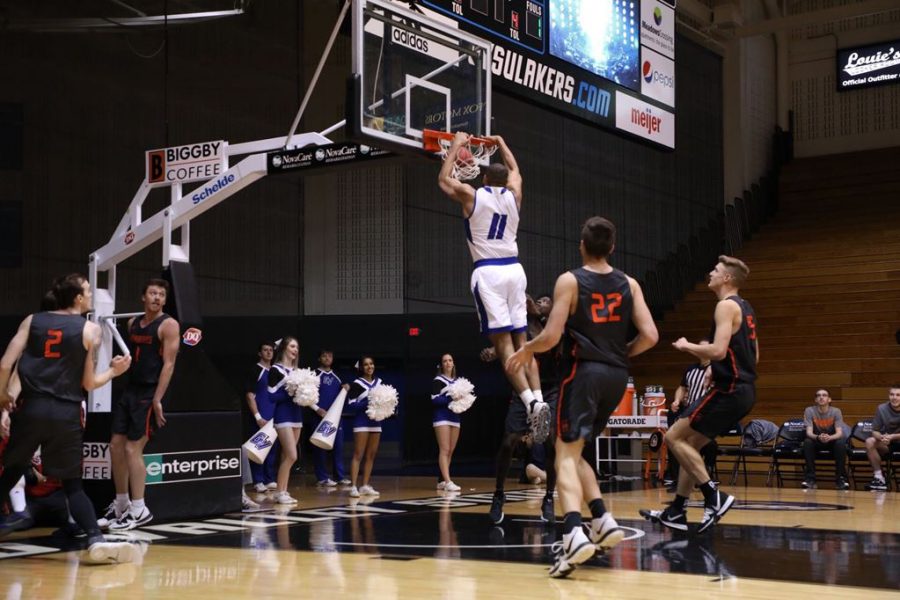 After losing to the No. 8 Ferris State Bulldogs two days prior, the No. 17 Grand Valley State men’s basketball team bounced back to get a win on Saturday, Jan. 4, as GVSU defeated the Lakers of Lake Superior State University, 67-65. With the win, the Lakers keep their first place position in the GLIAC south, with an 11-2 overall record and a 4-1 record in conference.

Junior guard Isaac Gassman had a career game for GVSU, as with Lake Superior State streaking after hitting a few key threes, the Illinois State transfer answered that run with the biggest shot of the game, hitting a dagger three from the left win to give GVSU a commanding 66-61 lead.

The visiting team was in a 2-3 zone for the majority of the night, but they were no match for Gassman, who was able to slither his way through the cracks of the zone for more than a few open buckets on his way to a season-high 25 points.

“We haven’t seen zones very often this year, but I know they left the middle open a couple of times,” Gassman said. “That got me going with a few floaters, and I know that last shot just felt like right place, right time.”

Gassman wasn’t the only junior to have a huge impact on the game, as starting center Christian Negron had 14 points, making all six of his field goals while also corralling four blocks and forcing the steal in the closing seconds that sealed the win for the Lakers.

While he only amassed two assists in the ball game, Negron, a transfer from Loyola-Chicago, just took what the defense gave him and didn’t panic in the high-pressure zone.

“We have great shooters, so I just try to find them as much as I can,” Negron said. “I just try to make that triangle read, and if they double (when I’m driving), I use a couple pivots and one guy will be open.”

GVSU coach Ric Wesley was also complementary of his big man’s passing, remarking on how key it is to get a few assists from every spot on the floor in every game.

“Christian (Negron) has been a good passer for us all year,” Wesley said. “As a big guy, he doesn’t always get 10 assists, but almost every game he gets two or three assists, and a lot of times you get big guys who never get assists, so he’s done a consistent job of handling the ball for us all year.”

Senior point guard Jeremiah Ferguson has been working his way back this week, coming off the bench for the Lakers in both of this week’s game. Wesley felt that Ferguson felt more comfortable in this game, as in recovery from his leg injury, Ferguson racked up 11 points and six assists in 26 minutes.

“(Ferguson is) still trying to find his way, and we as a team are still trying to find our way a little bit,” Wesley said. “He’s a big part of what we do, and he was out for a long time. I thought Ferg made some big shots and had some nice finds, passing to Ike (Gassman) on his big shot and making a couple other nice passes. I thought his playmaking was key for us, he’s not all the way back yet, but the more good players we have, the better we’re going to be.”

GVSU will look to build on this win in the coming week, as they travel to Ohio to take on Ashland on Thursday, Jan. 9, before heading to Detroit to take on Wayne State two days later.