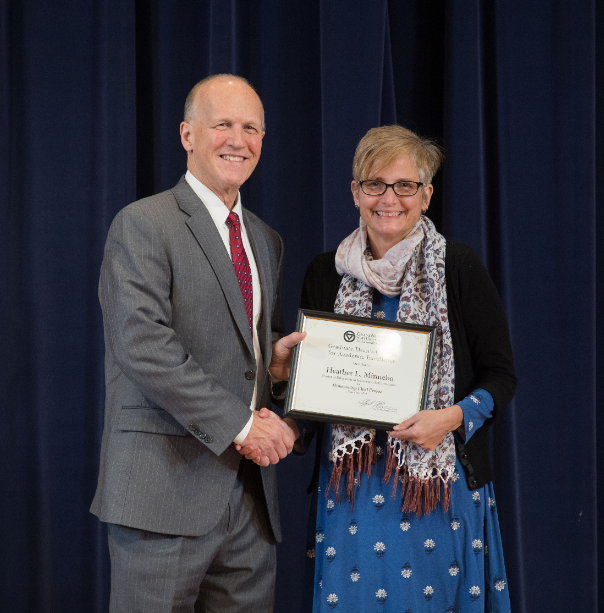 For fourteen years, Grand Valley State University has recognized exemplary graduate students with the Graduate Dean’s Citations for Academic Excellence awards. The Graduate Student Celebration ceremony presents awards in a number of areas, from Outstanding Doctoral Dissertation to Excellence in Sustainability. The 2019 winner of the Outstanding Final Project Award was Heather Harrington-Minnebo, who works as a full time art teacher at the West Michigan Academy of Arts and Academics. Her project, a classroom contextualization of Harvard Project Zero’s eight studio habits of mind, tackles major issues with education in the United States.

“A major topic in education are the ‘21st Century Skills,’ which educators and the government have come together to say are the characteristics needed to be productive members of society once you graduate,” said Harrington-Minnebo. “It’s a somewhat bloated list that covers creative problem solving, leadership, global awareness and so on. The National Education Association have condensed these skills into the Four C’s, which are collaboration, communication, critical thinking and creativity.”

The 21st Century Skills were originally popularized in the 90’s after the Reagan administration’s National Commission on Excellence in Education published “A Nation at Risk: The Imperative For Educational Reform.” The report made the argument that “the educational foundations of American society were being eroded by a rising tide of mediocrity,” using alarmist Cold War imagery to stress the dangers of foreign countries “matching and surpassing our educational attainments.”

“Reagan’s Nation At Risk report about how terrible in U.S. school systems are worked into the No Child Left Behind Act, which focuses on a very broad coverage of knowledge,” said Harrington-Minnebo. “It penalizes schools by not funding them if they’re not up to testing standards. It makes it really easy to slip into teaching to the test, which is all about memorization and solving a problem quickly as opposed to genuine understanding. Students are exiting without the skills needed to enter the workplace. But there’s no organized way that the Four C’s are being taught in schools, and there’s no incentive in an academic classroom to do that.”

In the visual arts classroom, however, she sees a potential solution.

“Harvard University’s Project Zero undertook a study with art educators and experts to really study and unpack what art teachers are teaching students,” said Harrington-Minnebo. “The result was ‘studio thinking,’ which they broke down into studio structures like project demonstrations and student critique, as well as the habits of mind that students are taught. What I noticed when comparing these to the Four C’s of 21st Century Skills is that they’re really, really closely related. They’re also valuable if you’re thinking about the development of students as growing humans, and you’re not just focused on getting these fourth graders out into the workforce.”

There are eight studio habits of mind – developing craft, engaging and persisting, envisioning, expressing, observing, reflecting, stretching and exploring, and understanding art worlds. In her graduate project, Harrington-Minnebo focused on one studio habit in particular, developing an example of how to incorporate it into lesson plans.

“The idea was to create a lesson that would help students assess their work and grow the skill of reflection,” Harrington-Minnebo said. “It’s the studio habit I saw as the most critical, because if a student is able to self-reflect it opens the door into learning the other skills – without it, there’s no deep learning done.”

Reflection is paramount in Bloom’s Taxonomy, a hierarchy of learning objectives Harrington-Minnebo found complementary to the studio habits of mind. Bloom emphasizes that there are different levels of understanding, with memorization being the most basic and the ability to create new ideas being the most complex.

“As I’ve been teaching I’m understanding more and more the importance of reflection,” Harrington-Minnebo said. “In my Intro to Art class there’s a project where we focus on this big idea of ‘place.’ We study these iconic national parks posters from FDR’s Works Progress Administration and they create posters of places that mean a lot to them. I always have my students do reflection throughout their work – after they’ve created simple sketches of five places, we stop and take a look at it. There’s peer critique and formative assessment from me, using the same rubric they do. Then we compare them and go back through their reasoning. At the end I have them complete a self-evaluation rubric and a written reflection of learning. I always ask them to identify new skills or knowledge and how they plan on using it in the future, because if they put into words then they’re more likely to retain it. And of course I always, always, always ask if they have reflections for me on how I could improve the lesson.”

Much like in her own lessons at the head of her classroom, Harrington-Minnebo found reflection to be an important part of her classes in the graduate program. Having been an undergraduate student at Grand Valley in the early 90’s, she’s also had a chance to examine her own development in education.

“With the exception of one or two, the quality of instruction is better now than I remember it being,” said Harrington-Minnebo. “Although it probably helped that I’ve better learned how to own my learning since my undergraduate days. I’m in the education program, so while they’re teaching us the best practices for education they’re actually using that in their teaching. The instructors emphasizing formative assessment really made me pay attention to whether I wanted to test my students and catch them out on not having learned something, or focus on their understanding.”