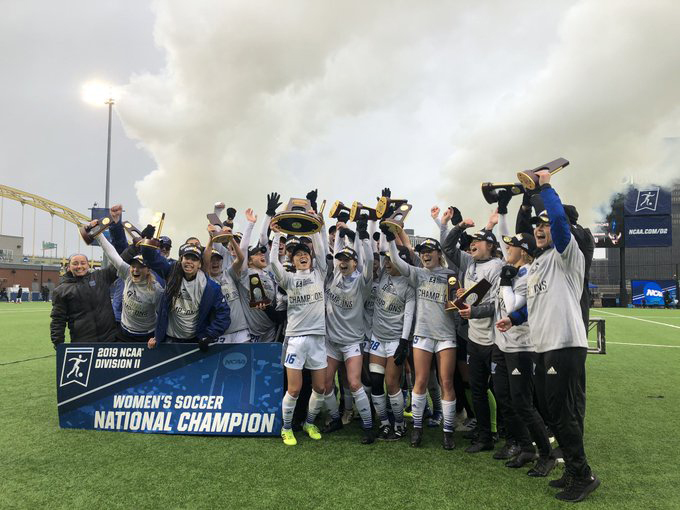 “I think I’ve watched it about a thousand times,” said Grand Valley State University Head Soccer Coach Jeff Hosler when reflecting on midfielder Giana Parlove’s national championship-winning goal in double overtime. “Probably 300 of them are just because of my daughter that wants to watch it over and over again.”

“We instructed Abby (Willerer) to serve it on that set piece to serve it really deep and put her foot behind the ball,” Hosler said when recalling the play. “Liv (Trombley) had a great fight for the ball and then it got to Ava who had her shot blocked then it came off right to Gi (Parlove) and Gi just followed it all the way through to the back of the net.”

Before Willerer initiated the set play, Ava Cook, the nation’s leading scorer with 29 goals and 70 points, was able to position herself in between her defender and the ball on a pass, which allowed Cook to draw the penalty and set up a free kick.

“As soon as they called the foul, I thought to myself, this is it, and sure enough, it was,” Cook said. “GiGi (Parlove) came up with one of the best hustle goals of the year and it couldn’t have been more fitting that she put it in the back of the net because of how well she had played up to that point.”

In a season full of dominant performances from the likes of Cook, Riko Sagara, Cece Steinwascher and Chantel Carranza, Hosler and Cook both said it was the performances of those who were not usually talked about in the post game box score that proved to be the difference makers for GVSU down the final stretch, like Parlove.

“She plays that holy mid position that just doesn’t provide a lot of stats, but she’s just such a creative player,” Hosler said of Parlove. “That goal was just one of those well-deserved, ‘soccer gods’ type of moments where her great performances all weekend shined through and gave her the opportunity and she was really composed to finish.”

Parlove finished the season with just five goals and four assists on 36 shots over the entirety of the regular and postseason for the Lakers, but took her play to a new level during the NCAA tournament, where she earned NCAA Tournament MVP honors once it was all said and done.

Other players Hosler mentioned that came up big in the national championship for GVSU were goalkeeper Jessica Radice, Trombley and Willerer.

“I think our kids showed tremendous resiliency throughout the entire weekend in Pittsburgh to be fair,” Hosler said. “I think Jess really stepped up and played incredibly tough, you know, she took some really hard knocks and got right back up and made some incredible saves.”

Former GVSU soccer player Tara Lierman once said, ‘you don’t have to get ready if you stay ready’, and according to Hosler, this has left an impression on many players throughout the team, including Trombley.

“I think that was really evident in Liv and how she was able to play to her strengths out there,” Hosler said. “She’s great in the air and with a team like Western Washington, whose game plan was to attack on corners, we probably had our very best ball winner out there defensively in those big moments and she was ready to go when her team needed her.”

Trombley and Willerer, were able to help condense the Lakers’ defense and help contribute toward an excellent game be played in goal by Radice.

“Jess (Radice) doesn’t really get to showcase her shot stopping ability very often with the way we’ve been able to be so dominant over the course of the last two years,” Hosler said. “I think for her, she has a chip on her shoulder because of that, because people don’t really know how good of a goalkeeper she really is.”

In her two seasons as GVSU’s starting goalkeeper, Radice has presided over 38 shutouts, made 77 saves, owns an 81.9 save percentage, has a record of 50-2-1, and earned a first team DII CCA All-American plaudit at the end of the 2019 season.

“Our backline gave every single ounce of effort they had and it showed big time,” Hosler said. “Olivia Trombley stepped up huge for us when she came into the backline after cece went down, she was absolutely dominating in the air and it took a lot out of Western Washington. Jessica Radice also had a lights out game and came up with some incredible saves that undoubtedly kept us in the game.”

Having taken some time off for the holidays following their national championship win, Hosler and Cook both have plans for how to attack the offseason.

“Recruiting, recruiting never stops,” Hosler said. “I was on the phone with kids the next day after the championship and then I’ll be on the road for most of January and almost all of February trying to wrap up our 2021 class and talk to a few last-minute transfers for 2020.”

For the rest of the team, Cook said they can focus on personal growth before returning to the pitch.

“The offseason is all about growing as a player, and it’s really nice because you can be as specific as you want in terms of growth,” Cook said. “I’m excited to just continue to work on different parts of my game and improve as a team to come back next year just a strong, if not stronger.”