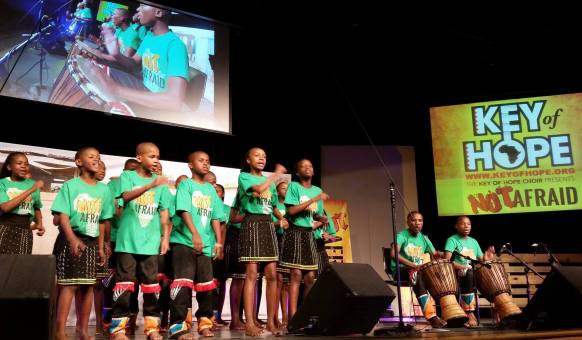 On Monday, Jan. 6, Key of Hope Choir performed for Grand Valley State University students in the Grand River Room of the Kirkhof Center. The choir concert was the last stop of Key of Hope’s “What Love Is” tour and was an hour-long performance that began at 9 p.m.

Key of Hope’s website states that they are an international non-profit out of Durban, South Africa “that reaches children affected by poverty and AIDS with the hope found in Jesus Christ through long-term mentoring relationships.”

The organization was formed in 2007 by Dan and Rachel Smither with a vision “To unlock the future of Africa by empowering children to be ambassadors of change in their families, schools and communities.”

2019 marked Key of Hope’s fourth United States tour, with their first taking place in 2012. This year, 25 children from the choir were chosen to perform on tour. The group has made a stop at GVSU with every United States tour, and all of their previous GVSU performances have been in the fall. There were approximately 300 students in attendance at Key of Hope’s very first winter performance at the University.

A total of eight songs were performed throughout the event. The choir concert began with the song “iYo Yo Yo” and was followed by “Bonga Bonga,” “Baleka A,” “This Is Amazing Grace,” and “We’re Gonna Win Track.” The second half the performance included the songs “Not Afraid Track,” “How Great Is Our God,” “What Love Is,” and “Korabella.”

The founders of Key of Hope were college friends with a GVSU’s staff member, which is how the first concert at GVSU was set up. Scott Stark, who works with GVSU’s Campus Ministry, said, “The choir came to the U.S. in 2012 for the first time as a way to give kids involved in KOH a picture of life beyond poverty and also as a way to let people in the U.S. see the AIDS disaster as personal and give them a specific way and reason to support the work of KOH.”

GVSU was the first stop on Key of Hope’s very first tour and has been hosting the children’s choir ever since.

Stark explained that GVSU hosting Key of Hope is a win-win for both parties involved. “For our students, it gives them a window into the need of the world and how they can be involved in bringing their passions and talents to meet those deep needs,” he said.

“For the kids from Durban who are in the choir they get a glimpse of one of the best universities with one of the best student bodies in North America and a vision of what a university education could mean for them,” Stark said.

Stark said that the Smithers are “a great example of people who are carrying out the GVSU mission to educate students to shape lives, professions and societies.”

He explained that these Key of Hope performances “also make AIDS, which has had a devastating effect particularly on the continent of Africa, personal to students and give them a practical and personal way to become part of the solution.”

The Key of Hope choir concert was free to the public and the group is expected to return to GVSU on future tours.