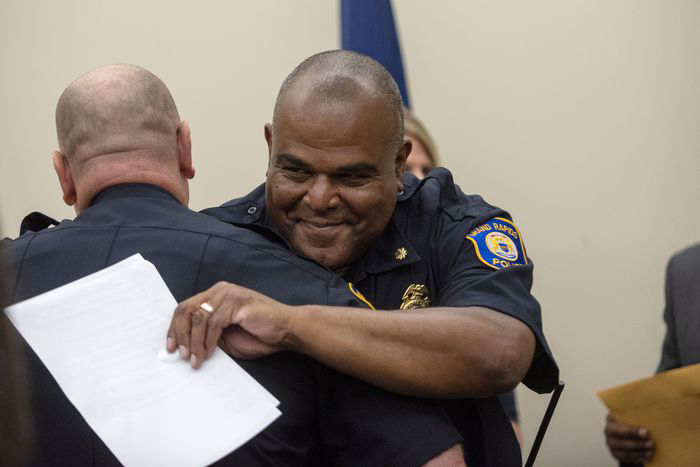 Established in 1871, the Grand Rapids Police Department had never been headed by an African American police chief in its 149-year history. That is, until they elected Eric Payne as their new chief of police, effective back on July 22, 2019.

Where did Payne’s interest in becoming a police officer first originate? During his college days at Grand Valley State University.

“I had an encounter my freshman year (of college) with a gentleman named Larry Johnson,” Payne said. “He was a police officer at Grand Valley at the time and it really stuck with me because that was the first time I had a conversation with a police officer of color.”

That moment stayed stuck in the back of a young Payne’s mind and sparked an interest in criminal justice that would motivate him to make a particular choice regarding his class schedule during the following school year.

“My sophomore year, my roommate convinced me second semester to take an intro (to criminal justice) class,” Payne said. “That class was with Dr. James Walker, and I was hooked after that point.”

Shortly thereafter, Payne switched his major from education to criminal justice, Walker became his academic advisor and the foundation that helped develop one of the GRPD’s more notable policing careers was set in place.

During the back half of earning his undergraduate degree, Payne set his academic tract to become a police officer with the help of recently-retired GVSU professor Jonathan White, who served as the Director of the School of Criminal Justice during his 36-year career at the university.

“Dr. White was very influential in my education and decision to become a police officer,” Payne said. “We were going for our next semester sign ups my junior year and I walked up to him and said, ‘I want to be a cop’ and he said, ‘Well sit down young man, let me talk to you about that.’”

Indeed, they talked. As time went on at GVSU, Payne said White helped him connect his interests in constitutional law and human rights to a career in law enforcement, which only solidified his intention to become a police officer.

That opportunity came to fruition as Payne began his career serving as a police officer for the Grand Valley Police Department during his senior year of college in 1985. Shortly after Payne walked across the stage to accept his diploma in ‘86, he decided to take his career another step further.

“One of my co-workers was applying to become an officer at the Grand Rapids Police Department and he suggested I do it also,” Payne said. “I was planning on continuing my education, but I was like, I could do that anyway even if I get into Grand Rapids, but I had a job and I was very happy.”

Under former GRPD Police Chief Harry Dolan, who served as chief of police from 1987-2012, Payne displayed an exemplary work ethic and ability to connect to members of the community, which lead to his ascension through the ranks of the Grand Rapids Police Department early on in his 33-years-and-counting career with the GRPD.

“I was promoted several times under Chief Dolan and shortly after that I took a handful of tests and before I knew it, I found myself a captain,” Payne said. “Which is something I thought I would probably be considering toward the end of my career.”

Under Dolan’s successor, Chief David Rahinsky, Payne continued his ascension. In 2015, he was promoted to Captain of the Investigative Division. Two years later in 2017, Payne was promoted to Deputy Chief of Police.

Following Rahinsky’s resignation in December of 2018, City Manager Mark Washington launched a nationwide search for Grand Rapids next police chief, in which Payne was identified as one of three candidates best suited for the job.

The two other candidates were Larry Scirotto, a former assistant police chief in Pittsburgh, and Mike Yankowski, a former police chief of the Lansing Police Department. But ultimately, leading city officials decided their best candidate was an internal one, thus cementing a historic appointment.

“It’s not lost on me that at the time — prior to being selected — being the first African American selected as police chief of Grand Rapids,” Payne said. “That’s not saying that those who came before me couldn’t have done it, they could’ve, but it was the right time to do it.”

The hire of Payne coincides with an era in law enforcement where the relationships between police departments and their surrounding communities around the country have continued to be strained. Payne says that policing is not what it used to be, in part due to what many call the ‘Ferguson Effect,’ which connects to one of his major tenets that he wants to work on as police chief of the GRPD.

“Trust, we really have to continue to work on our trust,” Payne said. “Policing has changed, but we have to have the trust of the community.”

In addition to working to improve trust within the Grand Rapids community, Payne also says that maintaining safety and transparency within the community are among his highest priorities as the GRPD police chief.

In order to prioritize safety, Payne talked of emphasizing the use of proper procedures during arrests and continuing to learn how to best handle the decriminalization of illegal substances.

Payne also said that transparency is accomplished through the GRPD’s citizen police academy, where officers educate members of the community on ‘99 percent’ of what goes on within the Grand Rapids Police Department and receive important feedback from the community regarding their profession.

“I believe we have a good police department and a great community,” Payne said. “There’s certainly things we can work on for both of them to improve, and I think if we do that in collaboration with the stakeholders within the community we can be the best, we can be the model department.”