One professor, one tuba, months of preparation 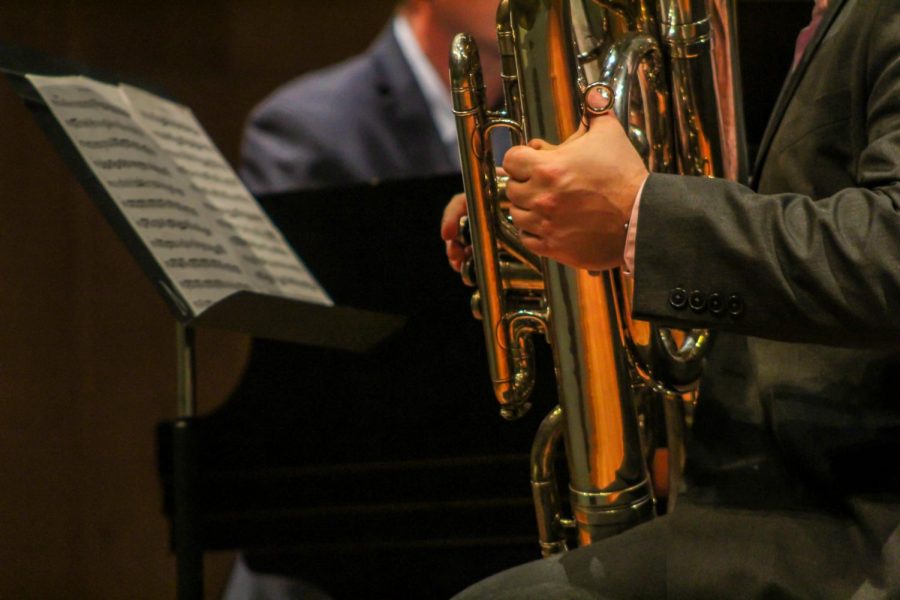 This free recital took place in the Sherman van Solkema Recital Hall in the Haas Center for Performing Arts and is open to GVSU students as well as the general public.

Carlson is currently the assistant professor of tuba and euphonium in the Music, Theatre and Dance Department at GVSU, and has been involved with the university for eight years.

While Carlson has been at GVSU for nearly a decade, he and his tuba have much more history. Carlson began playing the tuba about 26 years ago and since then has been across the globe performing with it.

“I play in a group called Dallas Brass, which is one of the most renowned brass quintets in the country,” Carlson said. “I also regularly perform with orchestras, Dixieland bands and other ensembles, as well as appearances as a soloist. I have played tuba in 46 states as well as China and many countries in Europe.”

As much as he has played for other countries, Carlson said that he loves the community at GVSU and was excited for the audience to hear what he had in store.

“It’s fun to play for the GVSU community,” Carlson said. “As a musician, you spend so much of your time practicing by yourself. So, it’s great to share this music I’ve been working on with the public.”

Carlson performs in an artist faculty concert every year and this year will be the fourth in which he and Byrens have organized the recital. This year, the pair’s preparations began well in advance.

“Every solo recital I prepare different repertoire, which takes a long time to prepare,” Carlson said. “I’ve known I was going to play this repertoire since the end of summer or early fall.”

Not only did Carlson have to prepare his own repertoire, but he and Byrens also had to reserve the recital hall and rehearse consistently.

“I try to practice about three hours a day almost every day,” Carlson said. “I’ve been preparing (the repertoire) since the end of the summer, but the last couple of weeks have been very intense preparation. I will be playing music by J.S. Bach, Johannes Brahms, Claude Debussy and Goedicke. This is all music that was not originally written for the tuba, but I really like playing.”

As the concert approached, Carlson’s excitement to perform for a live audience only grew.

“I think people will like it,” Carlson said. “Live music is an incredibly enjoyable thing to experience and I’m going to be performing some really great pieces.”

Carlson said that this recital was intended to be a very special one for audience members, as the tuba is not usually a solo instrument.

Although the recital was centered around the tuba, Carlson said he was also very happy to be working with Byrens to put together the performance.

“Byrens is a wonderful pianist on our faculty,” Carlson said. “Working with him is always musically rewarding because he plays so beautifully.”