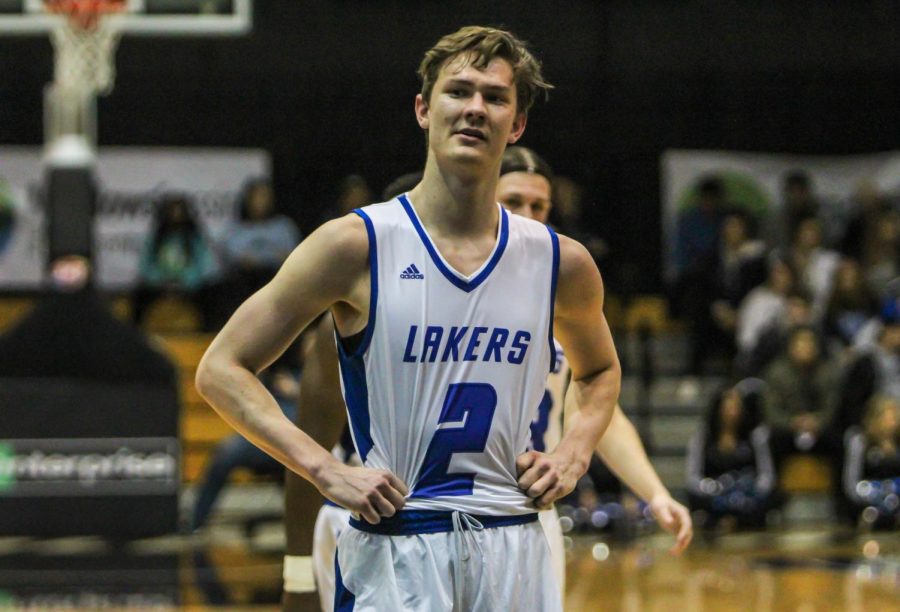 When Jake Van Tubbergen first stepped onto Grand Valley State’s Allendale campus, he was a pencil-thin teenager who would often get pushed around in the paint during most basketball games.

The Holland, Michigan native will be the first one to admit that he wasn’t the biggest guy, but out of everything that has happened in his already-illustrious tenure for GVSU basketball, he is most proud of how he has put on a lot of muscle and is now the hammer instead of the nail in the paint.

“I’ve probably put on 30 pounds since I came here as a freshman,” Van Tubbergen said. “That was big for me.”

Two-and-a-years and 1,041 points later, Van Tubbergen is a leader on the GVSU basketball team who plays a lot like one of his favorite basketball players that he always pick to play with in NBA 2K: Kevin Durant.

The similarities are clear to see: long arms, a lanky frame, running like a gazelle and getting buckets with an elite mid-range game and a driving spin move that when executed correctly is pretty much un-guardable.

Van Tubbergen’s 6’7” frame combined with his newfound strength has made him a force in the GLIAC, as over his Laker career, he has averaged 13.1 points and 6.7 rebounds per game while shooting 55 percent on field goals and 38 percent from three.

He’s clearly playing his best basketball this season, as he has scored 20+ points in 8 of 17 games and is averaging a team-high 10.3 rebounds per game.

Every basketball team needs a guy who can get buckets in the final few minutes when the pressure is high and the offense is sputtering. Van Tubbergen has been that guy for GVSU for a while, as his signature post-move — a turn-around jumper fading towards the sideline — is the most unstoppable move in the GLIAC.

Assistant coach Taylor Johnson first saw that move on display at the GVSU team camp in 2013. The progress he saw Jake make from then to the summer of 2016, when Jake’s AAU team won a game out in Vegas as he guarded Zion Williamson, is what made Johnson fall in love with Van Tubbergen.

“I first saw him play when he came to our team camp (the summer before) Jake’s freshmen year of high school,” Johnson said. “I continued to watch him gradually improve, saw his overflowing potential, and being that he’s a local kid, I knew we had to get him and we did.”

Upon being a offered a full-ride scholarship prior to his senior season with the West Ottawa Panthers, Van Tubbergen knew that Allendale would be a great fit for him after only one visit.

“When I came on the visit, I really connected with the guys,” Van Tubbergen said. “It’s pretty close to home, and I just felt like it was the right place for me.”

Fast-forward to Jan. 11, 2020, when Van Tubbergen used every ounce of his strength to record an and-one lay-up against the Wayne State Warriors. Van Tubbergen was shocked to hear after the game that that lay-up were the points that helped him reach the century mark.

“It feels good,” Van Tubbergen said in a post-game interview with GVSU director of communications and broadcasting Jake Levy. “But I’m just glad we got the win.”

That unselfish mentality has made GVSU a force to be reckon with when Van Tubbergen plays, as the Lakers are 45-28 all-time when he appears in the game.

He likely won’t boast about them, but Van Tubbergen’s play has amassed him a few accolades. He was named the GLIAC Freshman of the Year after averaging 11.4 points and 6.6 rebounds per game. He has also been named to the All-GLIAC second team twice, but is making a strong case to be on the first team this season.

While the GVSU men’s basketball has struggled to mesh on offense early in the season due to starting guards Jeremiah Ferguson and Jayden Hodgson both missing extended time with lower leg injuries, after winning 12 of the last 13 games, Van Tubbergen feels the team is thriving.

“We’re just trying to keep things rolling,” Van Tubbergen said. “The start of this year, we had a few guys out with injuries, but now that we got everybody healthy, we’re really hitting our stride right now.”

Both Van Tubbergen and Johnson were gushing about the junior’s muscle, including a funny little anecdote that Johnson couldn’t help but share that really articulates how much stronger Van Tubbergen has gotten since his 2017 arrival.

“He’ll probably hate me for saying this,” Johnson said with a chuckle. “But when Jake first got here, he couldn’t bench 185 (pounds). He was scrawny. But now, he can bench that weight probably five or six times.”

Kevin Durant couldn’t bench 185 when he first entered the NBA, either.