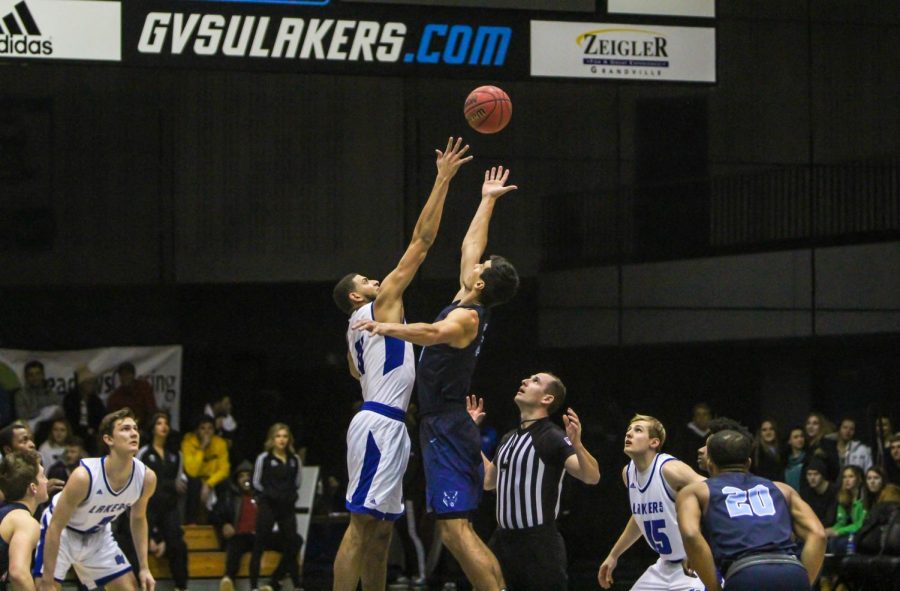 A great philosopher by the name of Dwayne Michael Carter Jr. (aka Lil Wayne) once said, “You know you at the top when only heaven is right above it.”

The only thing above the Grand Valley State men’s basketball team right now is heaven, as over the week, they improved to 15-2 overall and 8-1 in the GLIAC, which is good for first place in the conference.

GVSU coach Ric Wesley attributes that success to this team’s improvement on the defensive side, as they’ve held opponents to an average of 58.25 points per game.

“I think what has helped us in the past few weeks has been our defense,” Wesley said. “Our on-ball defense and ball-screen defense have been really strong, and when you do that and share the ball offensively, you become a pretty great team.”

The Northwood game started out like a rock fight, as physical play saw GVSU only lead by two before the final media timeout. After the break, GVSU went on a 15-2 run to close the half, with 13 of those points coming from junior Isaac Gassman.

“Jake found me in the corner and it felt good,” Gassman said. “I know coach gives me the freedom to shoot, and I do.”

Gassman was playing like he had the ‘Secret Stuff’ from Space Jam in his system, and senior starting point guard Jeremiah Ferguson must have also taken a swig of that on Saturday. He scored a season-high 22 points, recording five rebounds and three assists while going a perfect 6-for-6 from the free throw line.

It’s been an up-and-down season for Ferguson, who missed the entire month of December dealing with a lower leg injury, but Wesley thought he had his best game of the season against the Cardinals.

“(Ferguson’s) decision making was good,” Wesley said. “He got the ball to the right spots on the floor, and he got everybody involved, too. His defense was good too. Saginaw has some strong perimeter players, and Ferg, John (Slater) and everyone did a good job on them.”

A huge component to GVSU’s successful stretch has been their team chemistry, as despite only having six players returning from the 2018-19 season, this team gels well on the floor because of how much time they spend with each other off the floor.

“We have a lot of good guys,” Wesley said. “They get along well, and no team chemistry issues. They genuinely like each other and hang out on a day-to-day basis, so we can spend all our time focusing on the gameplan.”

With the games being lopsided for the week, it was the perfect opportunity for Wesley and his staff to experiment with a 2-3 zone that appeared for a few possessions in each game. Those in-game reps may be valuable if the Lakers need a key stop in close games, and Wesley and his staff aren’t afraid to change up the gameplan to keep opponents guessing.

“We’ll do anything we’ll have to do to try to win,” Wesley said. “We play mostly man-to-man, but we’ll play a little zone, a little box-and-one, a little triangle-and-two, we’ll put the coaches in there (to play), I don’t care. It’s our job to find a way to win, but at this point in the year we got a lot of different things in our arsenal that we can use.”