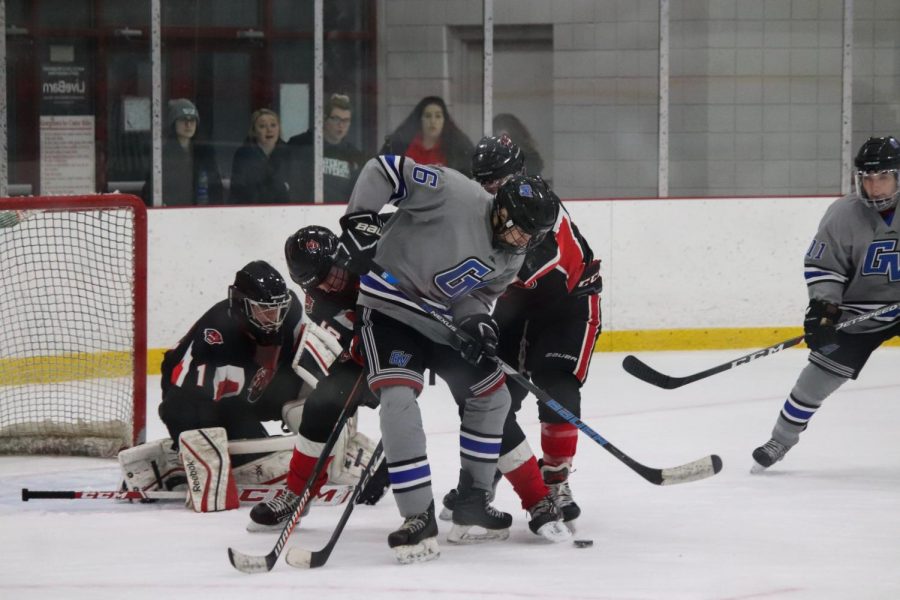 On Saturday night, Jan. 18, the weather outside was frightful and the roads were extremely icy. However, the ice inside of Georgetown Griff arena was prime for another Grand Valley State University DIII men’s hockey team (19-4) win.

In the second of their double-header against Davenport University (7-13), the Lakers won a high scoring game, 8-5. They saw the same success on Friday night, as GVSU beat Davenport with a score of 3 -1. The Lakers have now won their last eleven contests against Davenport.

Friday night’s match-up between the two teams at Davenport started off cold. It took two periods for either team to score.

The Lakers dominated possession of the puck , but couldn’t slip a shot past Davenport’s goalie until very late in the second period. GVSU took 51 shots in the game compared to DU’s 17. Senior Jared Myer did his part as well as the goalie for the Lakers, allowing only one score the entire contest and stopping several breakways from Davenport players.

Late in the second period on Friday, the Lakers broke through for their first score. Sophomore Timothy Baldwin stole the puck from a Davenport player in their zone. The DU goalie left the box to clear the puck and Baldwin was able to come around the other side of the goal for an easy shot and first goal of the game. Senior Nicholas Beers also scored a goal at the beginning of the third period to put the Lakers up by two. After DU scored a goal late in the third to cut the lead in half, senior Nicholas Salisbury scored a game-winner dagger to give the Lakers the lead 3-1.

“I thought we played very sloppy,” said head coach Charlie Link. “We just didn’t have our timing down yet after being gone for winter break. We haven’t gotten back in the swing of things yet and have only skated four times in five weeks.”

Link’s words and message to the team seemed to resonate, as GVSU came ready to play against Davenport the following night. The game started out hot in Allendale on the Lakers home ice, unlike on Friday with the team swapping goals in the first period.

Junior James Baldwin scored the first goal of the game, but this time very early in the first period. After Davenport scored a goal a few minutes later to tie the score at 1-1. Later in the period senior Mitchell Lawton scored his tenth goal of the season to put the Lakers up again. At the end of the period after another DU score, the game was tied 2-2.

Early in the second period, the Lakers’ Tim Baldwin scored for the second time in two nights to put GVSU up again. After DU tied the game later in the period the Lakers never looked back, scoring four goals unanswered.

Halfway through the second period, junior Benjamin Kowalske scored and James Baldwin scored his second goal of the night to put the Lakers up by two. Senior Trevor Lassaline scored a goal late in the second and again scored early in the third period for his thirteenth goal of the season and pushed GVSU up 7-3.

“Some parts of our game were really good tonight and other parts not so much, we played well and need to fix a few things before our next games this weekend,” Lassaline said. “We had a bunch of guys contributing tonight. Not just one-liners or two-liners, we had all four.”

Those contributions included a goal late in the third period after DU scored twice from Kowalske, his second of the game. In a very physical game, GVSU worked together as a team sharing the responsibility of scored as five Lakers found the back of the net.

Myer also did his job, stopping shots late in the contest to ensure another Laker victory. Even though the high scoring contest on Saturday showed the Lakers can score and the game on Friday showed they can defend, only giving up one score, the team still has improvements to make before the season closes out and the playoffs start.

“We’re going to need to work on our timing and positioning as the season closes out,” Link said. “That’s the big thing for us right now.”

The GVSU men’s DIII hockey teams next match-up is a double header next weekend against Hope college on Friday and Saturday.